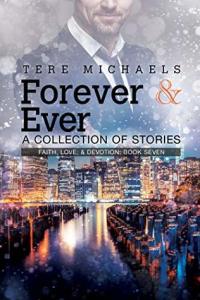 What happens after the story ends?

Join Matt, Evan, Jim, Griffin, and their friends and families for a glimpse of what happens after happily ever after. Between growing up and growing pains, weddings and retirement, changing careers and changing diapers, life is never boring. Changes, decisions, tears, and joy await as the years march on.

For most readers, we have favorites series we can name at the  drop of a hat.  Characters so beloved, so familiar that they have become a part of us over time, our affection and love growing with each story that rolled out, our connection deepening as we fell into their lives, riding out their romance rollercoasters and some very heavy drama.  And also for all the highs and rewarding moments that kept carrying all of us forward through the series and their relationship(s).

And with all series, there must come an end.  Not that we want to admit it.  But reasonably for every start, a finale must follow.

And for many reasons, that’s the one bit I always approach with apprehension and trepidation.  Series can get off on shaky steps but soon they are off and running, having found their foundation.  And they just get better and better in every way.  Faith, Love, and Devotion was great from the start.  Tere Michaels had characters that were messy, stubborn, closeted, hounded by demons, one had a deceased wife, kids that came with their own issues, police departments and cases that followed them with ghastly consequences, and so much more.  Complex doesn’t even begin to describe these men and their dynamics.

Nor how deeply I and so many others fell in love with them and their painful, often labyrinthine road to a relationship and HEA.  I’m surprised it was only seven books to be honest.

The author wrote skillfully of how mired down any current decision making is in the past histories, how choices for the future are often decided by others and elements flying under the radar.  In other words, these novels were real, believable, sometimes painful and frustrating to read when the characters behaved all too authentically. We could all shake our heads as Evan overthought something yet again, and we wondered how Matt was going to handle it. Don’t get me started on Jim and Griffin’s rocky path.  That had me glued to my Kindle through many a night. Oh, Jim and Griffin, who teetered precariously on becoming my favorites here. We lived with these people…over and over again We  watched the children grow up, the relationships change and mature as they do…and I started to wonder about the end of the series.

Luckily, Michaels decided to give all her readers a love letter. Forever & Ever: A Collection of Stories (Faith, Love & Devotion #7) by Tere Michaels is exactly that.  A collection of short stories that flow one to the other a year of several after that last book.  It shows the natural progression in the lives of these characters.  Mostly hilarious, some warmhearted and loving, it continues to tighten the bonds between all the people you’ve grown to over over all six novels and pulls it together in one last story to gladden your heart.

It’s a series finale you will be happy with.  Not something I have said every time.  No I can go back and read this one again and again as I do many of the books here and be delighted.  I think all lovers of this series and these couples will be too.

So yes I’m highly recommended this collection and this series.  New to Faith, Love, and Devotion?  I’ve listed the entire series for you below. Read them in the order they were written, What a wonderful journey awaits you!  It’s one I intend on taking again and again.

Love & Loyalty (the start of Jim Shea and Griffin Drake)

Forever & Ever: A Collection of Stories