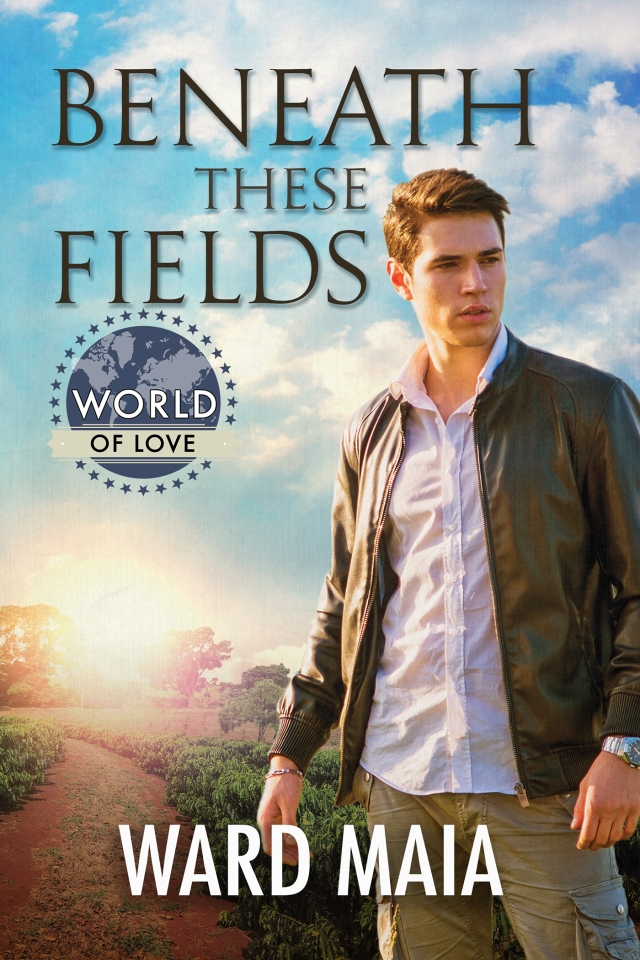 Beneath These Fields ( World of Love) by Ward Maia
Dreamspinner Press

Scattered Thoughts and Rogue Words is happy to host Ward Maia here today on tour for his latest novel Beneath These Fields.  Welcome, Ward.

I try to pour as much of my experiences into my characters, but not a lot of myself.

I don’t understand the question, sorry.

Yes, I like to read a lot of History and Mythology books, so research definitely plays an important role. But I enjoy doing both. Research is always fun and finding out about different cultures is always interesting. But making up new worlds, creating different sets of rules and tossing your characters into that mix also makes for interesting stories.

Not really, I grew up reading the classics and science fiction, but I prefer to write contemporary and fantasy novels.

Yes, that has happened. Coming to terms with being transgender was very difficult for me, so some of the stories I was writing I didn’t really know how to process or how to properly finish because it was difficult to unpack all the emotions tied to the characters and the story I was trying to tell.

I think HFNs are valid, but I’d much rather read a book with a HEA. It might sound a little cliché, but I think real life is difficult enough, so I like my fiction to make me happy. Also, I’m a helpless romantic, so it’s HEA for me all the way.

Do you read romances, as a teenager and as an adult?

I read a lot of classical books as a teenager and now, as an adult, I read a lot more romance, especially contemporary.

Growing up, Herman Melville. Moby Dick is hands down one of my favorite books of all time. Also The Lord of The Rings Trilogy; the first time I saw a map of Middle Earth, was the first time I realized creating an entire different world with an entirely different set of rules for your characters was possible.

At one point in my life, I was the proud owner of over three hundred books, so printed books will always have a special place in my heart. Having said that, I love ebooks because they completely changed how I accessed books and even the books I had access to. There’s not a lot of printed transgender representation where I’m from and ebooks are easier to access than physical ones.

I like covers to reflect some essential aspect of the story, whether it’s explicit or not. In my case, the farm played a very important part in Ellis’s journey so I chose a cover I felt reflected the dichotomy between Ellis-the-city-boy and Ellis-who-inherited-a-coffee-farm.

I don’t like to play favorites, but there are always characters that stay with me for longer than others. Ellis was one of those characters. I thoroughly enjoyed writing about him and his journey of self-discovery.

I want to write epic stories with unapologetically-queer trans masc main characters because I feel it’s an important representation that’s lacking in fiction. Especially in Brazil.

I think the concept of flaw varies greatly depending on which character you ask. What one might perceive as a flaw, another sees only as a personality trait. Having said that, I don’t think there’s such a thing as making a character too “real”. I enjoy reading about all-powerful characters with world-changing destinies just as much as the next person, but I also enjoy seeing just your average trans guy, doing average things and navigating the ins and outs of a romantic relationship like everyone else.

The traits I find most interesting in people are the ones they sometimes don’t even realize they have. For instance, how someone reacts to shocking news, if their eyes go wide, or they bite their nails, bounce their knees or even laugh. I do actually write them into my characters, because I feel it makes them more “believable’, so to speak, seeing as they can be traced to a real trait of a real person.

Yes! The first serious story I sat down to write was a contemporary romance with a best friends-to-lovers trope I started writing when I was seventeen. Recently, almost a decade later, I’ve picked the story back up and decided to develop it. It ended up turning into a duology and I have just finished writing the first Book. But who knows if it will ever see the light of day?

Yes, I have. Writing helps me deal with my anxiety – it’s kind of like therapy. So whenever I have a serious issue to work through, I usually try to write it out. Maybe I’ll write a scene similar to what I’m going thorough, to try and see how I’d feel or react in a given situation.

I once imagined a scene where the main characters are breaking up and one of them is sneaking out of the house when his partner wakes up and ends up running behind his car, shouting for him to come back and not leave. It hasn’t made it into any of my stories yet, but who knows? Maybe I’ll write a second chance romance and include that scene.

I’m a very boring guy, meaning I don’t drink anything remotely alcoholic. So no, I’ve never written a drunk chapter, but anything is possible. I tend not to pull back my punches when it comes to my characters, so writing drunk could end up being an interesting experience.

I love writing in my back yard, or just by the seaside. But maybe one day I’ll have a private writing room, overlooking snowy mountains and quite possibly the sea or a lake.

I write because my words demand to be given life and space to breathe. But also, because most people have severe misconceptions about transgender folks and how being transgender varies from person to person. And if I can clarify some of that while maybe entertaining a couple of people, why not?

And of course, I write because it’s something I love doing.

Like I said, I want to write about everyday trans masc individuals accomplishing both extraordinary and everyday feats. I don’t want to change the world, I just want to share my words with it.

Sometimes true worth is well hidden.

Ellis Campos is a successful divorce lawyer with little to no time for a personal life. His predictable routine is disrupted when he inherits a coffee farm from an estranged aunt. There’s no room in his life for all the complications that come with managing a farm in another state. But his plans to quickly sell it and go back to the big city fall apart when he’s manipulated into spending a week on the estate.

Adding to the unexpected surprises, he meets Rudá, a native Brazilian who works on the farm, and while teaching him about his aunt’s home and family, also tempts Ellis like no one ever has.

He doesn’t expect his life to change in such a short time, but as he finds value and comfort in the farm’s routine, Ellis quickly realizes that, like the land itself, Rudá has secrets that could send him running back to Rio.

Ward Maia was born and raised in Brazil and has seen almost every corner of that great and beautiful country. With a M. in Geology and Metamorphic Petrology, spending time in underground labs was more commonplace than interacting with real humans, which lead to the creation of entire fictional universes. The heroes that populate those universes are usually flawed and find love in unexpected places.

Having travelled throughout the country, from North to South, Ward now calls the Northwest of Brazil home. Alongside a grumpy sixteen-year old poodle (that insists on always having the last word) and hundreds of paperback novels, Ward lives five minutes from the beach and enjoys drinking copious amounts of coffee and feeling the ocean breeze while writing about unexpected places and people.