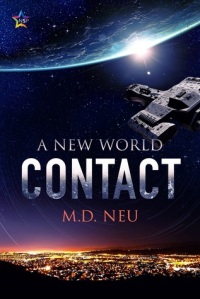 Mirtoff is Speaker General of the Nentraee people, who are divided into seven clans. Their home world is gone and now they live in 450 ships, searching for a new home. They have had disastrous experiences with other species so when they find evidence of intelligence on Earth they are wary, but with morale down and ships needing repair they decide to make contact. While Mirtoff may have peaceful intentions, General Gahumed as head of the Nentraee military, does not. Mi’ko is the Vice Speaker and plays a huge role in this book, though his POV is rarely shown. Almost all of the Nentraee POV is shown through Mirtoff. She is a good leader for her people and makes the alien hopes and fears clear and easy to empathize with.

The rest of the book book shows Todd’s POV. Todd’s brother Brad works at NASA and comes to warn them of the aliens’ immediate arrival. While Todd believes him, even though they are estranged, Todd’s husband Jerry is not convinced. Todd and Jerry go to the airport to pick up their friend Dan, former military, who is coming to visit. This is how the reader really gets to know Todd by his reaction to the news and his interactions with those closest to him. They are all together as the President of the United States makes the announcement that we have first contact with an alien race. Although other countries are mentioned and the United Nations plays a role, this is very American centric. As you can imagine, humans panic. I think the relatively peaceful time period after the announcement, supposedly due to good planning with use of the military, shutting down the stock market, and stopping all travel, is optimistic.

The aliens are confused and worried about human violence; they want to limit contact to scientific and diplomatic relations at first, but quickly realize they have to be more social than is customary for them. As with all science fiction, looking at humanity’s strengths and weaknesses through the eyes of an alien race is jarring. Since they are interested in trade and technological advances, Mi’ko focuses on Silicon Valley, wishing to do business with the company Todd works for. Todd becomes an unlikely central figure moving forward.

The depth comes from the author showing the family, friends and coworkers of all the principals. This helps to engage with the story emotionally, but I still felt removed for some reason. I will say although it is mentioned how different the Nentraee are to humans, their thought processes don’t seem different at all–they care and worry about the same things we do. Their history seems similar. The politics have only just begun as everyone vies to gain power and make money. This could really be expanded upon and I expect it will be in future books. I enjoyed this book and would be interested in reading more. That’s a good thing because after all the world building, this ends abruptly with a to be continued. By the way, this is a science fiction book that has a few gay characters, so don’t expect a romance.

The cover art is by Natasha Snow. I like the darkened view of Earth with all the lights on staving off the dark cold of space and the one ship making contact, carrying the hopes of their people.