Title: Kicking Up My Heels…in Heels

It’s the year 2000 and Kev’s twenty. He’s a proper grown up now. Maybe. He knows what he’s doing. And what he’s doing isn’t what he wants to be doing. He’s working in TK Maxx and instead he wants to be singing and dancing and bantering and laughing on stage. He. Loves. It. And they pay him too!

Kev’s continued search for his Prince Charming leads him to look in all the wrong places for all the wrong men and, inevitably, gets him in something of a pickle: physically, emotionally, and medically too.

But his mum and friend Tony are there to help pick up the pieces when it all falls apart as it so often does with Kev.

Optimism, a plan, and being really good at performing on stage, drive Kev forward. After all, he’s been performing off stage all his life.

Contains gay pride marches, multiple incidents of alcohol-induced idiocy, friends and family who stick with you no matter what you do, a lot of showtunes and camp humour, and a complete absence of smartphones and social media. He’s Kev, fly him.

Kieran and Jo were back from uni in London for half term, autumn term, or some term or another, and I met them in Salisbury for a drink and a good gossip. I met them in full Ginger Spice outfit. During the day. Yes. Part of the I am Kev hear me roar approach Tony and I had come up with, I was trying this new fearless, notice the fear and do it anyway thing, on for size. It seemed to suit me actually. It was also two big fingers up at my ex-boyfriend Aaron and his vile comments to me about dressing up, and the whole Arthur or Martha thing. Well, I wanted to dress as both Arthur and Martha, depending on how the mood took me, so Aaron and anyone else who didn’t like that could stick it.

Ever since Daddy Do Nothing, as Mum and I referred to him, had come back into my life, then disappeared again, just as quickly, it has spurred me on to dress more. It was a sort of two fingers up to Daddy Do Nothing too. An “I don’t need your approval, I know what I’m about, and I am fabulous, so you can disappear to your village and back to your new girlfriend and stepdaughter, and I’ll be fabulous over here”. All of that. His rejection to my cross-dressing had inadvertently brought out the flag waving slightly military—as in strong, organised, standing up for my rights not as in part of the actual army—drag queen in me.

Some people in my life had been more accepting of it than others. Jo, in particular, was always a bit sniffy about what I wore, and when I wore it, but he wasn’t really one of my friends, he just came as a set of two with Kieran. Of course, I wouldn’t ever tell Kieran that, I’d never want to upset him, so I simply bit my tongue and ignored Jo’s comments, or how he sometimes excluded me from things with his subtle and slimy excuses. It wasn’t worth making a fuss, not for Kieran’s sake. But today, when I was meeting both Kieran and Jo, I knew what I had to do. I knew I had to dress to both impress and make an impression. If I could stand on stage and sing to a packed pub, I sure as hell could walk into a pub dressed like a real woman and order a few drinks.

I finished my realistic makeup, adjusted my red wig with a bleached stripe, just like Ginger Spice’s hair. I checked there was enough padding for my bra to make an impression under the little Union Flag dress I’d run up for myself exactly like Geri Halliwell had, by sewing a tea towel onto the front of a little black strappy dress. I pursed my lips, reapplied red lipstick, added a touch more blue eye shadow in both a homage to the blonde one from Abba, and Geri, obviously, and I was ready to go. I clumped my way downstairs in the black platform boots I’d bought with my staff discount from TK Maxx.

I swept past Mum in the kitchen.

She was drying some crockery at the sink with a spotless tea towel. She put the mug down. “Don’t take this the wrong way, love. You look fabulous. Honestly, it’s the ginger one from that girl group, isn’t it? Where do you think you’re going like that, love?”

She looked me up and down, trying to take in what she saw before her. She pursed her mouth. “So, what’s with the outfit, love? Seems like a lot of effort for a drink with some friends. I worry about you, what people say. Some others are like that Aaron you went out with.” She paused, clasping her hands together in front of herself. “Sadly.”

I’d already explained to her my I am Kev hear me roar, and she knew how upset Dad’s disappearance had made me, so I simply said, “I am not letting people like Dad or Aaron, make me ashamed of who I am. I am who I am and I’m doing it more and more.” I put my hands on my hips and thrust my fake bosoms towards her. “All right?”

She nodded slowly. “Just you take care, love. I don’t want anyone hurting you. Watch where you park. Walk where it’s lit. Don’t cut along by the river. That’s dark this time of year, and you never know the sort of people who hang around the industrial entrance out the back of Argos. Watch yourself.”

She tapped her cheek.

I kissed her cheek then jumped into my car, checking my reflection one last time in my mirror, brushing aside a minor doubt about whether I was doing the right thing, and drove to the nearest car park to the sports pub where I’d asked them to meet me.

There was no need for me to worry, I was well used to doing female impersonations by now in public. Kieran and Jo were full of uni talk, as expected, but they seemed to be enjoying it, so I was pleased for them. Jo gave me a few looks and made some comments, as I knew he would, but I easily brushed them aside. And a man mistook me for a real woman, so that made my day. I’d passed, as they say in cross-dressing circles. My first passing.

I only felt slightly scared once as I tottered loudly on my heels back to the car, using the long route through town. I came across a big group of teenagers on the corner by the bank on the way to the market square. I debated crossing the road and then decided they’d know I was scared, so instead, flicked my hair over my shoulder, stuck my fake bosoms up, and clip-clopped through the middle of them with a few words about being sorry and could I squeeze through. A few of them looked up and looked back at me again—I saw them in the reflection of shop windows as I continued tottering to the car—but no more. I held my head high. If anyone had started anything, I was in a busy bit of town, which even that late was full of people, and after a few loud screams, I was sure they’d have run away, most bullies being cowards in disguise really.

So, battle fought and won, now for the next one. 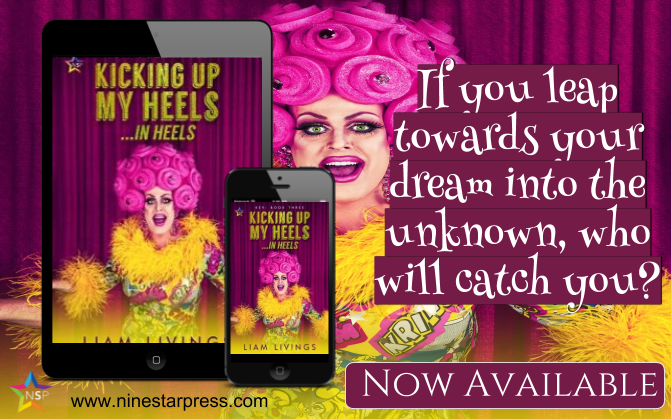 Liam Livings lives where east London ends and becomes Essex. He shares his house with his boyfriend and cat. He enjoys baking, cooking, classic cars and socialising with friends. He has a sweet tooth for food and entertainment: loving to escape from real life with a romantic book; enjoying a good cry at a sad, funny and camp film; and listening to musical cheesy pop from the eighties to now. He tirelessly watches an awful lot of Gilmore Girls in the name of writing ‘research’.

Published since 2013 by a variety of British and American presses, his gay romance and gay fiction focuses on friendships, British humour, romance with plenty of sparkle. He’s a member of the Romantic Novelists’ Association, and the Chartered Institute of Marketing. With a masters in creative writing from Kingston University, he teaches writing workshops with his partner in sarcasm and humour, Virginia Heath as http://www.realpeoplewritebooks.com and has also ghost written a client’s 5 Star reviewed autobiography.