The sequel to Blood Echo.

For Rayne Kennedy, the only Hybrid in Vires, a walled Vampire city in Vermont, life is almost over. Despite the new family and temporary happiness she’s found, her vampire girlfriend, Scarlett Pearce, has been given ninety days by the mysterious city government to turn her into a vampire. She’s sure her days as a human are numbered.

Scarlett fights to find a way to avoid Rayne’s death when her father and society have decreed it must happen. Between new relationships formed, old ones reshaped, and a bloody romp through the city’s darkness, Rayne must decide if she trusts Scarlett not to give in to her blood lust. Thrown into the center of an unexpected revolution, Rayne tries to save herself and Scarlett, unsure if her days as a human, and their time being blood bound, are truly coming to an end.

Chapter One
“Pick it up.”

Scarlett watched with lazy eyes as my hand shot forward to grab the apple. I hated her a little for how easy she found this.

I dropped the apple the minute she let me and did my best to straighten my face.

The revelation that Scarlett and I were blood bound was old news, but its implications were still new to both of us. We’d been spending time when we were alone learning to overcome the phenomenon—or trying.

The vampire stretched, reclining before me on the black satin bedsheets, and I wondered if she felt me compelling her at all. I tried to recreate the feeling inside myself from the rare times I had succeeded in bending her to my will. Silently, I concentrated and willed her to pick up the apple.

Raindrops ran down the sleek glass doors of Scarlett’s balcony, the sky a dreary gray. Even from the great height of the thirteenth floor, I could see little beige specks below that I knew were actually humans. They came from the outskirts of the city—the Fringe, brought in to work around the decadent skyscrapers that housed Vampire families, like Scarlett’s. High up in Pearce Tower we could live under the illusion of safety, for the moment.

Below, the streets of Vires teemed with vampires, Deltas who were genetically advanced enough to walk in the daylight. The non-Deltas would join them at sunset.

A flash of curiosity disturbed me, pulling me back off the dark path I was traveling, thoughts of society in Vires starting to consume me. Without looking, I could feel her watching me, taste her curiosity. Her wish to know what was going on inside my head was clear through the emotional connection we shared. I tried to lock her out, to shield my feelings from her. She tipped her head and when I met her dark eyes, their intensity burned. I figured I was successful.

Pick up the apple.

Her voice was liquid smoke, lingering in my mind, penetrating every corner. My pale hand darted forward and grabbed it again. She smirked. My stupid, smug, beautiful vampire.

My fingers released their grip the moment she bade them to, and the abused fruit fell back onto the sheets.

I wanted to grumble, to ask what the point was. We both knew I couldn’t resist the commands she gave. We also knew she could resist mine effortlessly most of the time. I smoothed my hands over my jean-clad thighs and tried again.

“I’m not resisting you, sweetheart. I haven’t felt any compulsion to resist yet.” She was amused. It danced in her eyes, in the little tug at the corner of her mouth, but I knew she was trying to be diplomatic, at least.

“Why is this even important?”

She had been playful and light-hearted, secretly enjoying the little game we shared. The minute I asked the question I felt her growing cold, uncomfortable. The pleasant hum of her emotions as they lapped at me waned before they shut down altogether.

The subject we were avoiding hung between us, heavy and suffocating. After almost a week of sleepless nights and uneasy dreams I knew sometimes she could share, I was ready to drag it out into the light.

“I don’t ever want it to be used against us.” She was somber, her expression dark and unreadable.

“Scar, if I’m going to be a vampire anyway…”

She hissed. I prepared to backpedal, wishing I had been a little more tactful, but she was already speaking.

“Why are you so obsessed with becoming a monster?”

“Jade’s not a monster and she’s a vampire.” Dark eyes softened at the mention of her younger sister, one of the people she loved most in the world. Through our connection I had quickly grown to love her too.

“Jade has struggled more than you know.” It was cryptic and caustic and an answer that was oh so Scarlett.

“You’re not a monster, really.”

We were silent for a few seconds, my reply dancing on the tip of my tongue. It was a large part of what had been keeping me up at night, but I was too afraid of her answer to voice the topic.

“Say what’s on your mind?” It was only half a question, and I could tell it took some effort for her not to command it out of me. Beneath the cold indifference she had painted on her face, tiny tells and miniscule shimmers of her feelings told me she was nervous.

“I don’t want to get old when you’ll always be young.”

She laughed, and the sound was ever so slightly bitter.

I wondered if I would ever stop being staggered by that fact.

“Besides, I don’t think aging is something we have to worry about. I’m almost certain you’ve already stopped, being as you are.”

“Hybrids don’t age?” My voice was an octave too high with surprise, and maybe a little bit of joy.

We hadn’t much discussed what I was, what I had become, what she had made me. Her cool and careful handling of the subject frustrated me, and it gave me the uncomfortable feeling she was making plans without any of us.

“Just a hunch.” She tried to curtail me before I got too fixated on the fact. “But if I’m right and age isn’t a factor, are you still so eager to be turned?”

“Being a hybrid is still dangerous. What if the Government eventually discovers that us sharing blood is what caused this? What if they find out we’re blood bound? Wouldn’t it be safer if I was less…breakable?” 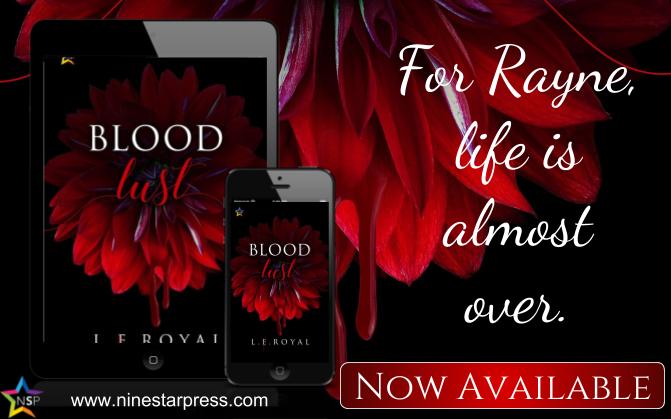 L.E. Royal is a British born fiction writer, living in Texas. She enjoys dark but redeemable characters, and twisted themes. Though she is a fan of happy endings, she would describe most of her work as fractured romance. When she is not writing, she is pursuing her dreams with her multi-champion Arabian show horses, or hanging out with her wife at their small ranch/accidental cat sanctuary.