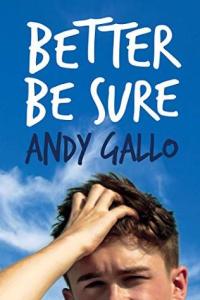 When the stakes are this high, you better be sure you can win.

Jackson Murphy lost his parents to a boating accident, but they’re never far from his thoughts. He attends the same university as his parents, joined the same fraternity as his dad, and even lives in his father’s old room, along with his adopted brother, Marcus. Life brightens when he meets the man of his dreams.

Edward Knowles trades full-time college for working during the day and community college at night when his father’s factory closes. He intends to stay deep in the closet to keep his job in heating and cooling. But Jack pushes all his buttons.

Jack’s college rival challenges him to bring a date to the upcoming dance. He goads Jack into accepting even though failure means he and Marcus will lose their room and Jack must leave the fraternity.

Jack is falling hard for Ed, but Ed will never agree to go the dance. Ed—not knowing the stakes of the wager—has also made it clear that Jack taking another man will end their romance.

With pressure from friends and enemies alike, will Jack hold on to his legacy… or his heart?

While reading Better Be Sure (Harrison Campus #1) by Andy Gallo, I can’t begin to count the number of times something about either an aspect of the situations these characters founds themselves in or the dialog/conversations I got pulled into (that involved multiple people)  made me reflect just how well author got their ages and timing right.  Even as I might have gotten frustrated over their fears getting the better of communication, I got it.  Boy, they are young, dealing with peer pressure, stress, and well, just stuff.

Gallo obviously understands this age, these young men, and makes us feel it too.  It rings of authenticity from the tight bonds of fraternity brothers through the ages to that of adopted brothers through trauma and devastation.  Better Be Sure covers a range of topics, from coming out to bullying to self acceptance, and grief, even clinical depression.  Plus formals, townie versus college, family stress, homophobia, and so much more.  Gallo set himself a huge agenda here and almost pulled it off perfectly.

I think only that he tried to do too much in the end kept this from a higher rating but really it’s so good.  The characterization alone makes this story easy to dive into.  You fall immediately into love with these true to life, complicated, moving young men trying to get through school and their fraternity life.  That includes tests, a formal, dating, a bully, and for Jack, the fact that he’s still dealing with the traumatic death of his parents four years ago.  It’s left him with having “episodes” which read like clinical depression, which is one of my issues here with the story.

Jack clearly has needed therapy dealing with not only the tragic loss of his parents but the horrific material free for all and monetary squabbling that ensured after they died.  The combined emotional impact on Jack was devastating.  Only his adopted family, including Marcus, saved him.  But even with all the mentions of his multiple breakdowns, never it is mentioned the need to get Jack help.  I do understand at that age you can’t be forced to accept help,  but I wish that more had been made of this element, especially since it’s such a big part of Jack’s story.  And the “episodes” he continues to have throughout the story, never exactly calling them what they are.  For me, that is actually one of the reasons this story didn’t get a 5 star rating. I just wish this had been explored a little more thoroughly.

I never joined the Greek life at my college, having flown the Freak flag myself, but I have faith that Gallo gets that right too.  It feels like it in the dynamics that goes on the the fraternity and between the big and little brothers. But I do remember the “townie vs college” aspect of it and that’s dead on.  From both perspectives!  How that brought back memories.  Weaving all this into his characters made for deeper personalities and gave us young men we feel we know.

Tight bonds are everywhere here and not just between young men.  Jack’s best friend is also a young women, one of several of strength in this story. It’s a great cast of characters and I loved spending time with all of them.  So I’m thrilled that this is just part of the beginning of a series.  I will be happy to follow each one as it releases.

Better Be Sure (Harrison Campus #1) by Andy Gallo is a terrific contemporary new adult romance, and a great start to a new series.  It’s one I definitely recommend.

Cover Artist: Adrian Nicholas.  I so connected to that cover.  That is Jack all the way.  Great job.