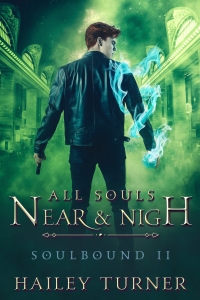 You can’t bargain with death if you’ve already sold your soul.

Special Agent Patrick Collins has been reassigned by the Supernatural Operations Agency to New York City. Navigating his new relationship with Jonothon de Vere, the werewolf he’s now soulbound to, is nothing compared to dealing with territorial disputes between the vampires and werecreatures who call the five boroughs home. But the delicate treaties that have kept the preternatural world in check are fraying at the edges, and the fallout is spilling into the mundane world.

Manhattan’s club scene is overrun with the vampire drug known as shine and the subways have become a dumping ground for bodies. When the dead are revealed as missing werecreatures, Patrick and Jono find themselves entangled in pack politics twisted by vampire machinations.

Learning to trust each other comes with problems for both of them, and the gods with a stake in Patrick’s soul debt aren’t finished with him yet. Bound by promises they can’t break, Patrick and Jono must find a way to survive a threat that takes no prisoners and is stalking them relentlessly through the city streets.

Old and new betrayals are coming home to roost but the truth—buried in blood—is more poisonous than the lies being spun. Trying to outrun death is a nightmare—one Patrick may never wake up from.

I loved this book.  Urban fantasy is my favorite genre and we rarely get true UF with the main characters having m/m relationships.  I had read the first book in this series and enjoyed it but felt it had a lot of problems with repetition and clunky world building.  I felt the writing was good but that it really needed better editing.  I almost didn’t try this but I had really enjoyed the characters themselves and felt the series had a lot of promise so I decided to give it another try.  I am so glad I did.  All of the issues I had with book one were absent here.  This was really well written and I felt there was a marked difference in the quality of this story.
I love the world the author has created and there are a lot of really interesting and well developed characters; both the two main characters, Jono and Patrick, as well as all of the side characters.  There are a lot of types of characters too which is always a bonus for me.  There are magic users, various types of shifters, vampires and gods.  The gods are one of my favorites and are not seen very often in most UF series so I find that a creative touch.  The author has done a great job of including gods from various cultures which I’m also a fan of.
The story is action packed and filled with twists and turns.  I found it all easy to follow though and I was immediately caught up in the plot and the new adventure these guys were on.
The romance is lovely and is a unique twist on the fated mate trope.  I’m a sucker for fated mate stories and I’ve read a bunch of them.  This is the first time though that I’ve read fated mates that have a slow burn also.  These two know they’re fated to be together and they accept that but they’re taking their time developing their relationship and they stop and question different things.  They want to make sure they are clear on what things are the bond and what are their actual feelings.  They’re also very respectful of each other’s differences.  They have the potential to become a favorite couple of mine I think.
This could be read as a stand alone but I think you could easily follow along.  I would recommend you read book one first.  You meet all of the characters and it’s a good story overall.  This series is a must read if you like UF series with two male leads.
Cover Art:  This cover was done by AngstyG and I love it.  I think it’s gorgeous and it really sets the vibe for the story and matches how I imagine Patrick.
Sales Links:  Amazon
Book Details:
Kindle Edition, 374 pages
Published March 19th 2019
ASIN B07PLQBLH3
Edition Language English
Series Soulbound #2