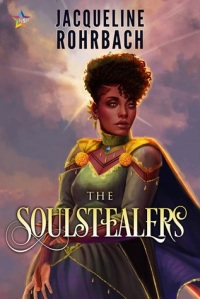 Arnaka Skytree grew up believing she was chosen to bring new magic to the world. As the heir to the cult of druids responsible for keeping their floating palace habitable for the wealthy aristocracy, she’s expected to wield her power as those before her did: by culling the souls of peasant women.

But when Arnaka learns more about the source of her magic, and that her best friend’s soul will be harvested, she embarks on a journey to end the barbarous practice and to restore a long-forgotten harmonious system of magic practiced by the original druids. Along the way, she discovers she’s not the only girl chosen to restore balance to their world—many others have powerful magic inside, and with them, she will tear the floating palace from the sky so everyone can live in the sun—out of the shadow of the eclipse.

NineStaPress has published many brilliant Fantasy novels. Sadly, “Soulstealers” was not one of them.

I can’t even say what exactly I didn’t like about this book. For some reason, it just didn’t work for me at all.

I didn’t feel any sort of connection to Arnaka, other than vague annoyance at times. I didn’t care at all for any of the minor characters. And I didn’t care too much about the plot. I felt a vague disconnection, occasionally broken by vague annoyance. I started skipping paragraphs and only reading the dialogue somewhere around the 60% mark.

There was some worldbuilding and while the idea of druids harnessing souls as a source for magic is not something I’ve come across before, it all felt a bit generic. I missed depth, like religion. There’s talk of a “merciful goddess”, but there’s no explanation of any kind of religion or religious practice other than that. I thought it odd that this was a patriarchal society, when men didn’t have magic and there was apparently a female god.

Since I didn’t care about any of the characters, I really didn’t feel the connection between Arnaka and her love-interest. I’d actually expected a different love-interest, since she expressed feelings toward that girl. But it turned into a sort of enemies-to-lovers trope, which I don’t like under the best of circumstances. It also felt a bit sudden, which might be due to my skimming. And the way they behaved somehow didn’t really fit with their previous characterization.

The editing could have been a little more thorough as well. While there weren’t any obvious grammar/spelling mistakes, there were other inconsistencies. For the first 20% or so, souls are judged “devious”. And then, all of a sudden, it’s “deviant” souls, only to switch back to “devious” somewhere toward the end. There were also several instances, where the women traced “ruins” instead of “runes”.

365 pages isn’t all that long for a Fantasy novel and I’m usually a fast reader. But it took me ages to finish this book, because I kept getting distracted all the time. It just couldn’t hold my interest for any length of time.

Overall, “Soulstealers” just didn’t work for me at all. Which annoys me, because I have yet to find a F/F story that I actually really like and that just doesn’t make sense. The pairing shouldn’t matter, if it’s not primarily a love story. But I often have trouble with female MCs in fiction, so maybe this just isn’t my kind of thing.

The cover by Chelsea Geter is okay, though I think the woman on the cover doesn’t look like a 16-year-old.

One thought on “A Free Dreamer Review: Soulstealers by Jacqueline Rohrbach”