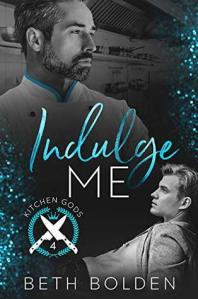 Throughout the restaurant industry, Chef Bastian Aquino is a notorious control freak. For two very long years, Kian Reynolds has worked for Bastian as his special assistant, doing whatever he and his restaurant needs. The toughest part isn’t even all the impossible tasks he expects Kian to complete flawlessly—it’s the hopeless, endless love he feels for his older boss.

Falling for someone so far above him might be agonizing, but at least his feelings aren’t unrequited. Bastian fell in love right alongside him, but at the very beginning, they made the choice to abstain for logical, smart, professional reasons.

But love isn’t logical, it isn’t smart, and it definitely isn’t professional. It defies containment, even by Bastian. While he watches Bastian struggle with their attraction, Kian finally comes to the conclusion that he’s done.

He’s done standing off the side, done not getting any of the credit, done letting Bastian define the boundaries of their relationship. Most of all, he’s done waiting.

Indulge Me is an 85,000 word contemporary romance, featuring a boss/employee relationship, an age gap and very delicious risotto. It is the fourth and final book in the Kitchen Gods series, and to receive a fuller, more enjoyable reading experience, I would recommend reading at least one other book in the series first.

I was (not so) patiently waiting for this fourth title in the Kitchen Gods series by Beth Bolden since I first met Bastian and Kian in the previous books. I so wanted to know them better and discover their love. I think the author did a great job with their story, not just in this new release, but also with all the little snippets she gave me about tis couple in the other titles. I was so curious and eager, I couldn’t wait to have their story on my hands.

And I have to say I wasn’t disappointed, I loved this novel so much. I think it was well balanced, how much they wanted each other, how they were fiercely protective, how they waited for fear to ruin something important. Cause to me it was clear from the beginning they were deep in love, it was never just attraction. And then when they were finally together, it was really beautiful to see how Bastian truly wan not just “the Bastard” everyone called him, but a caring, sweet man.

I am a fan of books about chef and food in general, plus I like my MCs to have an age difference. Moreover Indulge Me took place over some years and following these men through the journey that brought them together, was a gem. And the epilogue was really lovely. Least but not last I was able to meet again some of the characters I learnt to love in the whole series.

I’m sad this is the last title but it was a very well done series and I feel pretty satisfied with it. I feel to recommend it.

The cover art by AngstyG is lovely as everything this artist does, she’s so good.