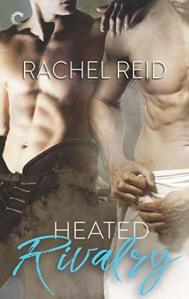 Nothing interferes with Shane Hollander’s game—definitely not the sexy rival he loves to hate.

Pro hockey star Shane Hollander isn’t just crazy talented, he’s got a spotless reputation. Hockey is his life. Now that he’s captain of the Montreal Voyageurs, he won’t let anything jeopardize that, especially the sexy Russian whose hard body keeps him awake at night.

Boston Bears captain Ilya Rozanov is everything Shane’s not. The self-proclaimed king of the ice, he’s as cocky as he is talented. No one can beat him—except Shane. They’ve made a career on their legendary rivalry, but when the skates come off, the heat between them is undeniable. When Ilya realizes he wants more than a few secret hookups, he knows he must walk away. The risk is too great.

As their attraction intensifies, they struggle to keep their relationship out of the public eye. If the truth comes out, it could ruin them both. But when their need for each other rivals their ambition on the ice, secrecy is no longer an option…

One-click with confidence. This title is part of the Carina Press Romance Promise: all the romance you’re looking for with an HEA/HFN. It’s a promise!

As a fan of both hockey and hockey fiction, I’m always on the lookout for more contemporary romances with hockey and gay hockey players at the center of the action.  So I was delighted to come across this new release from Carina Press.  It represents both a new author and a new series for me.  And since I ended up loving both the story and this couple, it will send me running to pickup the first story in the series.

To be honest, I wasn’t sure at first how I felt about the format the author uses in Heated Rivalry (Game Changers #2) by Rachel Reid.  Told from both points of view of the main characters, we start the novel when they are teenagers vying for status and an award.  It is their first meeting and the beginning of their personal hockey competition and interaction.  From then on the story starts jumping forward as they meet in different cities in various time intervals, the competition and heated rivalry flaring hotter and hotter. Each time frame advancing both the personal competition between them as the best hockey players currently coming up in the game, and something more.  A physical closeted relationship that’s still somewhat impersonal….until it starts to be something more.

As I said I started out unsure about this flash forward framework because it didn’t allow the reader to see any development of a relationship between the men.  Until I realized that was the point.  There wasn’t one.  Only the one we saw on ice.  But midway, those jumps in time slowed and a relationship between the men started to develop beyond the competition and mere physicalilty they had allowed themselves.  And we as readers relished it all the more for the lack of intimacy that had gone before.

Due to this format, we need the 2 pov narrative to fill us in on the men, their background and the drama that is happening around them and to them in some cases.    These characters are well developed and if they seem a tad familiar to those that follow hockey there is a reason for it.  If you read the Afterword by the author, you will know that Reid was a fan of the HBO hockey series about  Penguins/Capitals rivalry, specially the one between “good boy” Sidney Crosby of the Pittsburgh Penguins and  “bad boy” Russian Alex Ovechkin of the Washington Capitals. As a Caps fan, I can tell you it’s a hard fast competition that continues today between “The Kid” and “Ovi” .  And it sparked the inspiration for this romance and story.

The slow to develop emotional intimacy is what we crave here because what they already have is an intense physical one.  So the payoff for the men at the end is a realistic one.    It’s not a HEA but an authentic HFN which I thoroughly appreciated.  It’s what they had worked for, were still working for, and, cleared eyed as to how the NHL is run, homophobia included, make plans that we as readers not only get behind but quietly cheer for.  And hope to see this couple pop up in future stories.

I really enjoyed this tale.  The author has a feel for hockey action on the rink, a well developed storyline, great characters and a ending I believed in.  Love it.  And now to go back and check on the first book in the series.

This is definitely a standalone novel as far as I can tell.  One that I recommend, especially if you are a fan of hockey and hockey romances like me.

Cover art by Carina Press.  Ok not a fan of this cover.  Could be for any romance, nothing really distinguishes it as a hockey novel.