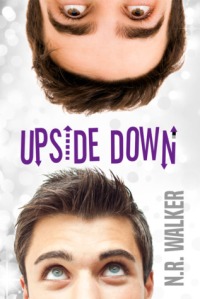 Jordan O’Neill isn’t a fan of labels, considering he has a few. Gay, geek, a librarian, socially awkward, a nervous rambler, an introvert, an outsider. The last thing he needs is one more. But when he realizes adding the label ‘asexual’ might explain a lot, it turns his world upside down.

Hennessy Lang moved to Surry Hills after splitting with his boyfriend. His being asexual had seen the end of a lot of his romances, but he’s determined to stay true to himself. Leaving his North Shore support group behind, he starts his own in Surry Hills, where he meets first-time-attendee Jordan.

A little bewildered and scared, but completely adorable, Hennessy is struck by this guy who’s trying to find where he belongs. Maybe Hennessy can convince Jordan that his world hasn’t been turned upside down at all, but maybe it’s now—for the first time in his life—the right way up.

I cannot begin to tell you how much I love this story. Upside Down by NR Walker is a joyful melody of complex, endearing characters on a journey of self exploration, revelation, and love. That their path is a 5 minute bus ride and a daily bus route, their cheering and support squad a small group of best friends and strangers on the bus that becomes the Soup Crew?  Well, that’s just some f the magnificent and quirky elements that give the main couple and this story it’s staying power.

I have always treasured NR Walker’s stories because of her ability to build these incredible characters that feel so real to me.  Whether it’s a botanist with a passion for butterflies or an American geologist transplant in the outback in red dirt country, their search for fulfillment and love has stayed with me long after I finished their stories.  Their series remain favorites to this day.  I struggled with them, and celebrated in their HEA’s.

With Jordan O’Neill and  Hennessy Lang it’s exactly the same.  For Jordan, an intelligent, quirky (his words), gay librarian, he already is in possession of too many labels.  But he’s been so unhappy when it has come to romance, he just doesn’t want a sexual relationship.  So when his best friend and fellow librarian, Merry, suggests he may be asexual, he’s not sure he wants another label or what exactly that means.

What follows here is a gentle, revelatory exploration of what it means to be asexual through two characters, one, Hennessy, who has long accepted the fact that he’s asexual and knows what that means to him in every aspect of his life, mentally, emotionally, and, yes, physically.  And the other in the person of Jordan who has been foundering in his relationships, not knowing the reason why until he steps into that meeting and hears himself pouring out in words.  This entire portion of their story feels so powerful and yet so intimate and affirming.  Walker is able to give out so much information you realize later but in the moment?  It’s all heart and feelings and pent up emotions coming out that have never been verbalized before by Jordan and others.

And oh, the humor!  From the total group of strangers on the bus that start listening in on the conversations between “headphone guy” and Jordan that slowly coelesses into the wonderful advice giving Soup Crew, and the magnificent Merry, or Jordan’s roommate Angus, or any of the other superlative characters that inhabit this story and circle of friends or the library, this is a gift that never stops giving narratively speaking.

I smiled and laughed the whole story til my face hurt!  Then read it again.  My heart needed it that much.  Motherfucker! lol

The writing is top notch, the characterizations outstanding and the plot incredible but still the combination soars still further into something memorable that exceeds a 5 star rating.  It’s definitely in my top five Best of for 2019.  So grab it up and get reading.  Yes, I highly recommend it.

Cover art is adorable.  Love it.