Thanks so much to Scattered Thoughts and Rogue Words for hosting me today! I’m Avery Cockburn, author of the Glasgow Lads series, a set of contemporary m/m sports romances set in Scotland. The newest release, Play Hard, is a followup “happier-ever-after” novella featuring Robert and Liam, the heroes of Playing With Fire.

In Play Hard, Robert senses that Liam is starting to feel dissatisfied with their year-long relationship—Liam feels Robert works too much, which is partly a reflection of Liam’s dissatisfaction with his own life. To spice things up, Robert proposes a series of challenges for them to give each other, little games or dares to get them out of their ruts.

His first challenge for Liam is not what you’d expect:

Robert unzipped his kit bag and pulled out a rolled-up piece of A1-size blank poster board, along with a pair of scissors and a glue stick. He arranged the items on the glass coffee table as he spoke. “Remember at school when they’d have us make collages by cutting out photos from magazines and all? Like, what we wanted to be when we grew up, or what we did on summer holiday?”

Liam grunted. “I hated them.” Being the opposite of artistic, he’d always ended up clipping out words instead of pictures.

“I know. I remember the time you pasted together the sentence, ‘When I grow up, I want to not make fucking collages.’” 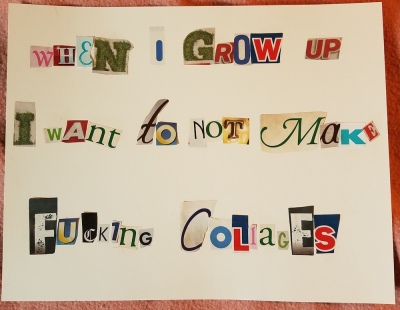 “In all different typefaces, like a wee ransom note.” Liam smirked. “That stunt got me sent to the headmaster.”

“That stunt made me want to be your friend. Mind, it was the next day I went up to you at the swing park and said—”

“‘Let’s be mates!’ I remember.” Liam had never thought to wonder why Robert had invited himself into his life with such bluntness. To his six-year-old self, it had seemed the most natural thing in the world. He pointed a chopstick at the poster board. “So what am I to do with that now?”

“You’ve got twenty-four hours to illustrate—with pictures cut from wherever—one thing you want from me.”

Liam’s answer to this challenge is as surprising as Robert’s proposition itself! Of course, you’ll have to read Play Hard to find out what it is.

If you could ask one person in your life—a partner, friend, coworker, boss, etc—for one thing, what would it be? Just tell us the first thing that comes to mind in the comments below. And don’t forget to enter to win a copy of the Glasgow Lads Books 1-3 box set, which includes three novels and an essential short story!

You can also sign up for my newsletter at averycockburn.com/signup to download a FREE copy of Glasgow Lads prequel novel Play On, in both its original and author-commentary version. 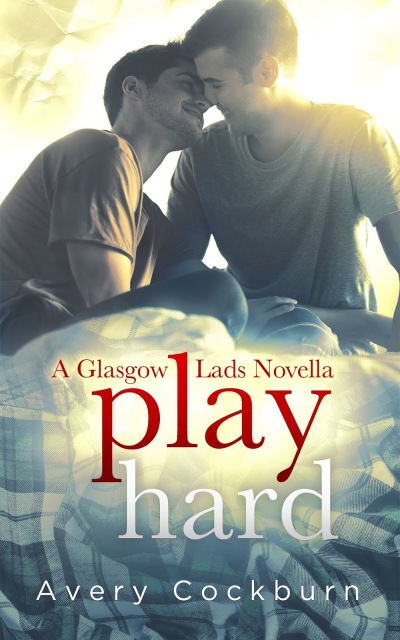 The Glasgow Lads series centers around an all-LGBTQ football/soccer team in contemporary Scotland. Though the series has an overarching storyline, each novel features a new couple and a happy ending, so they can be read in any order. The series also includes a prequel novella and two (soon to be three) “happier-ever-after” followup stories.

“I’ll always want more of you.”


Robert McKenzie lives to work. He’s fresh out of university as a video-game entrepreneur, and his new app could actually save lives. But burning the candle at both ends means missing out on the best parts of his own life—including his boyfriend, Liam.


Liam Carroll works to live. His job as a bartender pays the rent—if not always the heating bill—and that’s plenty for now. But Robert’s workaholism reminds Liam his own life is going nowhere, and his own dreams are scaring the pants off him.


To jolt them out of their ruts, Robert invents a new game: He and Liam are to take turns offering each other sexy new challenges with irresistible rewards.


Of course, Robert gets more than he bargained for, as Liam takes their game in one surprising direction after another. Whether it’s in the bedroom, on the football pitch, or at the pub (or even the supermarket?), the things they learn about each other—and themselves—could change their lives forever.


Note: This happier-ever-after novella features the main characters of Playing With Fire but can be read as a stand-alone story.


Hiya, I’m Avery Cockburn (rhymes with Savory Slow Churn). Under my real name (Jeri Smith-Ready) I wrote over a dozen novels for major publishers. As an indie author, my days are filled with beautiful men who play beautiful games in the most beautiful place in the world. Thanks to my pure awesome readers, it’s pretty much the best job ever.


I live in the United States with one infinitely patient man and two infinitely impatient cats. Join my quarterly-ish newsletter at www.averycockburn.com/signup to receive a free book plus loads of exclusive bonus material. Cheers!