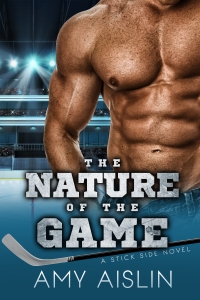 Six years ago, an ultimatum forced Dan Greyson to make a choice that cost him everything he loved most. One of those things? His boyfriend, hockey player Ashton Yager. Now that they’ve crossed paths again, Dan isn’t about to let the opportunity slip away. Ash’s reappearance in his life is just the catalyst Dan needs to escape the rut he’s fallen into…and win back Ash’s trust and love.

Ashton Yager, once burned and now a little bit shy, didn’t mean to publicly come out as bisexual. But now that he has, he’s got to deal with the consequences, including the fact that it might’ve cost him his NHL contract. With his job on the line, he needs to keep his head down, work hard, and play the best hockey of his life. Rekindling things with Dan? That’s not exactly keeping a low profile. It’s also never going to happen, not after Dan walked away once without an explanation.

When a hurricane forces Ash to seek shelter out-of-state, he and Dan find themselves in the same B&B, where old feelings resurface. But with everything Ash has on the line, does he dare play with fire again?

This story had so many things going for it before I even started it.  It’s a second chance at love novel, one of my favorite tropes, it happens to be from a series about a hockey team and LGBT hockey players, so score!  That’s always high on my list!  And then there’s the author Amy Aislin who I have followed for a while and and always enjoyed her stories.  So I anticipated a good time and heartwarming romance and the author delivered that and more.

The Nature of the Game (Stick Side #2) by Amy Aislin slides into events that happen shortly after the ending of the first book in the series,  On The Ice.  While you don’t have to read that first because the exposition here helps to fill in all the gaps you will miss out by excluding that tale, reading it first gives you a firmer foundation for all the characters and a real sense of who these people are by letting you into the dynamics in the interlocking relationships you are diving into here.

The first story features Dan Greyson’s brother, Mitch, and Alex Dean, best friend and fellow hockey teammate to Ashton Yager, one of the other main characters in this book  So you begin to see how tight the threads to each couple are from story to story.  Yes, they make important appearances as you would expect.

The format here is both that the story is told from two points of view as well as in flashbacks.  We get present day Dan and Ash, and then back to their past bright first relationship and the future they thought they had together.  If you read the first story and from Dan’s pov, you are aware of what broke them apart.  But Ashton doesn’t so his ignorance and, in part, seeing the trainwreck that we know is coming is part of the heartbreak of this story.

How it all gets put back together is the charm, the hope, and the true joy here.

I liked that the author didn’t make any of it easy.  Years of pain, hurt, and poor decisions can’t be put aside overnight and they aren’t.  Both men  work to regain trust and a relationship even as major events happen in each others lives.

I really sank myself into the lives of these hockey players, the outreach program they were running for LGBT youth in Tampa, and the stress of even thinking about coming out to your team and the NHL, the possibility of what it could do to your career.  Again, I thought the author handled it realistically and authentically.

I loved the first two stories and can’t wait to see who’s next, although I have an inkling.  Hockey romances are such an addition for me and this series is just another reason why I love them so.

Cover art is pretty typical, has some hockey elements and a half naked torso.  Wish it was more specific to the story.

The Nature of the Game