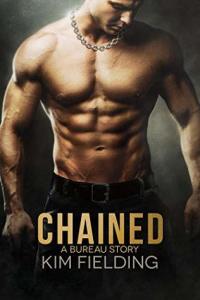 Another satisfying paranormal romance from Kim Fielding! Someday I want to read these stories back to back but I’ll wait until the series ends, and I hope that’s not in the near future.  In this story, agent Terry Brandt of the Bureau of Trans-Species Affairs is going undercover at the home of a famous Hollywood agent. Something is not right with the way he ensnares his clients so Terry is set up as a movie star wannabe to get to the bottom of it.

The dogs who accompany the agent and guard Terry around the clock appear to be very intelligent, so much so that when Terry talks to them, they seem to understand. But when he compares the collar around the neck of his human guard—sexy, muscular, quiet Edge—to the collar on the dog that seems most intelligent, he realizes the truth. Edge and his brothers are dog shifters. And Terry is head over heels for Edge.

The story is short but the author sketched amazing character descriptions and a complete plot that led to a few painfully violent scenes, a few tender, loving moments, and a complex plot that ultimately leads to an HEA for the couple.  At times, it’s hair-raising, nail-biting, and fast-paced action, but overall, it’s simply a well-written drama with memorable characters and a satisfying outcome.  I highly recommend this and others in this series to readers who love action drama and paranormal activity mixed in with MM romance.

The cover by Reese Dante features a fit, muscular man, his naked torso on display with a chain around his neck. It fits the story and most certainly grabs attention.