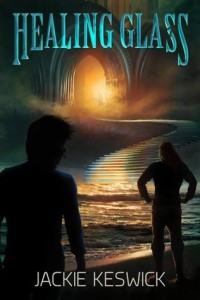 This is an intriguing fantasy novel about the political machinations amongst the Craft Guild. Most of the story revolves around a city made of glass that is suspended over the ocean. When the Craft Guild arrived and needed shelter they took it over, but the glass in the city is failing and no one knows why, or how to fix it. Between the need for Minel’s skills as the glass master, and the strange obsession Regent Wark has for him, Minel is unwittingly made into a pawn of the corrupt councillors. When Minel is taken strangely ill, his friend Captain Falcon tries to help him. He is not the only male craftor suffering from a lung evil and he must be pairbound to save his life. Regent Wark tries to force Minel to be pairbound by any means necessary, forcing Minel to flee the city.

I had my doubts–I thought this was just going to be an excuse that forced Minel into having sex with Falcon. I’m glad that was not the case; not because I would have minded that as a plot point per se, but that the rest of the book would have gone in a completely different vein. I would have missed reading what is there. Although sex does ease the symptoms of his illness, the author worked hard to remove concerns of dubious consent for the main characters. There are bleak references to dubcon/noncon for other characters (off page). It’s a tale of greed, power, sorrow, pain, and betrayal. Thankfully, the author makes the relationship between Minel and his warrior Falcon the touchstone, giving the book love, hope, and friendship. I enjoyed seeing flashbacks of moments of their friendship, while watching them carve out a future amongst all that life had to throw at them. With the way his character is described in the beginning, I worried how Minel would be able to be the mate of a warrior. The author crafts Minel’s character in a believable way throughout the story, showing how adapting to this new culture and way of life brings out the best in him. Falcon’s adjustments are there too: how to live with someone else, how to communicate effectively with a loved one, how to let go of pride if it’s in the way, and how to work through fear of danger for someone else. Minel too has to learn to bend his priorities to include others.

There are many layers to this story, spanning three generations. Warriors, craft masters, and merchants have different gifts (talent, magic) in general, with variety among individuals. Elements of spirituality are subtly incorporated here. This isn’t world building in the traditional science fiction sense–no description of flora or fauna, minimal history, and only the politics pertinent to the story. This novel is more focused on human factors and infrastructure for the city since the city is a main character. For an exciting change, all the female characters are strong, smart, and talented. It was easy to picture the world created here, without being overwhelmed by wordy descriptions of the terrain. The social commentary about personal choice and freedoms, political corruption for personal greed, people in power who don’t have the knowledge or skill to govern, and giving them free rein without proper oversight packs a wallop. Still, there are individual moments in this that are filled with joy and quite enchantingly described. With the way the warrior talents are used as a major plot point, I would have liked to have felt a little more of their brotherhood.

I think fans of the author’s Dornost stories will like this too. I hope there are other novels set in the Warriors’ Guild and Merchant Guild, or even more stories in the Craft Guild since this author likes to play in different timelines. I’d love to see more about talent and shapings, with some of the side characters involved; and more of the history of this world, which I expect will be layered in with other novels. I enjoyed this story and all of its characters.

The cover was done by Pavelle Art. It is perfect for this novel, depicting an important scene from the book.