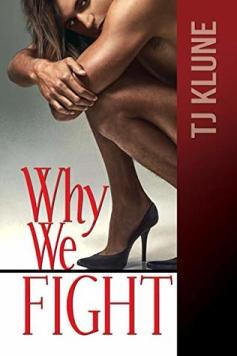 Do you believe in love at first sight?

Corey Ellis sure doesn’t. Oh, everyone around him seems to have found their happy ending, but he’s far too busy to worry about such things. He’ll have plenty of time for romance after he survives his last summer before graduation. So what if he can’t get his former professor, Jeremy Olsen, out of his head? It’s just hero worship. And that’s the way it should stay.

Except that this summer, bigender Corey—aka Kori—is interning at Phoenix House, a LGBTQI youth center that recently hired an interim director. And because life is extraordinarily unfair, the director just so happens to be a certain former professor, now current boss.

Desperate to keep things professional as he and Jeremy grow closer, Corey makes a major mistake: he turns to his friends, Paul Auster and Sanford Stewart, for help.

But Paul and Sandy have some ideas of their own.

Set in the summer of 2016, Why We Fight is a celebration of queer life and being true to oneself… no matter the cost.

I was so waiting for Corey’s HEA and when I finally finished to read Why We Fight I was so happy he found Jeremy in his life. As always TJ Klune wrote another masterpiece, beautiful written and full of emotions. I got sucked one more time into the amazing world lived by Sandy, Paul, Vince and Charlie and all the amazing people I met in the previous titles in the series. This time too I laughed out loud more than once when I really shouldn’t have since I was alone. It was impossible to resist, these people were all so funny and always over the top. I fell for them through all the books and I think it will take time to recover.

I don’t want to spoiler the plot more than what the blurb tells you. Probably Why We Fight was my favorite title in the series, it was packed with feelings as the others, but in my opinion it was more strong and poignant, maybe due to the place Corey and Jeremy were working at, maybe simply cause Corey was truly on another level, a bigger than life human being, a precious friend. And for someone like him, Jeremy was so right, and the way they waited for each other and for the perfect moment for them to be together was special.

If you haven’t started the At First Sight yet, do it now, you want be disappointed.

The cover art by Reese Dante is awesome, it was love at first sight for me.

Published May 14th 2019 by Dreamspinner Press

The Queen & the Homo Jock King