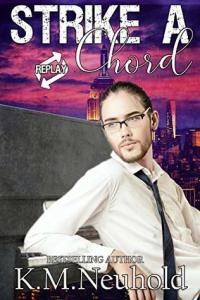 “You want to fake date me?”

Music is my life, my band is my heart and soul, and it’s all falling apart before my eyes.

A plan hatched from desperation as we both watch our careers burn down around us. Dating my best friend’s twin brother, Paris, who just so happens to be a gay icon at the moment seems like the perfect plan. And if we have a little fun along the way, where’s the harm in that? The band is spiraling, his football career is going up in flames, and the more the world falls down around us, the easier it is to get lost in each other.

But are stolen moments during our own busy schedules and hurried kisses hidden behind social media posts the basis for a real relationship, or is this just another thing that’s going to turn to dust in our hands?

**Strike a Chord is the fourth and final book in the Replay series. This series can be read in any order.

Tying up a series can always be a tricky business, especially if the series has rested its foundation on more than one couple.  In this case, its a band. K.M. Neuhold has stretched the arc over five books.  One a foundation story called Rock Bottom which shows the band Downward Spiral on the edge of imploding due to the personal problems of some of the band members after years of being together and incredible success. After that each band member gets their own story (which I have listed at the bottom of this review).  We see the band, their rise, each person’s demon’s and the SO, the relationship, the issues, and finally how it’s resolved for a HEA for that couple.  But the future of the band?  That’s left to this story and so is Benji, the last band member to get his HEA.

Strike a Chord (Replay #4) by K.M. Neuhold finally gets around to Benji, the “good” member of Downward Spiral, the one that can always be counted on not to bring the drama or any trouble, the stable one.  I am thrilled that Benji finally gets his time in the spotlight, his time to shine because he so deserves it.  Often the lowkey one in all the other stories, here Benji gets to take the stage and oh, my, how he takes command.

With his long flowing hair, elvish beauty, and lean body, Benji is gorgeous although in high school Paris initially thought mistook him for a pretty girl.  From the back at a locker in the hallway.    But that was the last time.  Then Benji turned around and Paris was lost.  And confused and totally in the closet until years later in the NFL.  Not so his twin brother Landon and Benji’s best friend also since high school.   Those two came out together, were inseparable until Benji and his band left for the road and success.

Strike a Chord begins with both men arriving almost at the same place in their careers and both dreading the future.  Benji believing his band will lose their contract and break up because of the deep personal issues of the others, including one back in the hospital and Paris ending his football career because of an injury and his age.  Neither knows exactly what is ahead of them or how to handle it.  Going home seems like the only answer for both.

The characterizations are quiet and fully realized.  I say quiet because while they lack the huge drama and specific medical or addiction issues of the others, the qualities of these men are no less compelling and real because they aren’t as angst driven as rest.  What starts off as a way to keep both men in the media while they figure out what happens next to themselves and their careers and lives becomes a believable and real relationship readers connect with.  It’s backed up by years of history between them so no case of instant love exists here. No, in fact the opposite exists, that both men have been in love with each other since high school and now, finally, get their chance at love and HEA.  After clearing up quite a few misconceptions and misunderstandings of course.

I enjoyed the Christmas family scenes (both families), the snow and the escape to the island paradise.  It was all so lovely and heartwarming. Just the delicious reconnection between them all over again?  Oh my word!   I read several passages over and over for the sweetness and the hotness combined.

The ending and the wrapup is everything I hoped for.  Sexy, all inclusive with all the band and their mates involved and happy ever after for all.  Every loose end tied up with a bow.  And awaiting some rice!  Yes, color me happy and recommending this book and this series.

If you love rock stars on a search for HEA, grab up this series.  Each member is very different and offers something for everyone as does their mate and storyline.  But I promise you each and every one gets their HEA and its a wonderful journey to take with them all the way to the end.  I loved every page of it.

Cover art is just not something I liked.  That’s not either mc.  Paris is a big brawny football player.  Benji?  Long flowing gold hair that is often up in a main bun, thin elvish gorgeous face and long, lean body.  Uh, no.

Replay Series with links to Goodreads:

Beat of Their Own Drum #3 Jude

Strike a Chord #4 Benji and the series finale