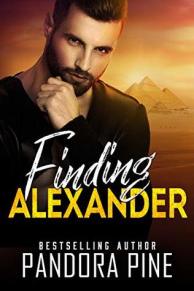 Cairo Vanderbilt, the eldest twin son of famed archeologist Gordon Vanderbilt was born to carry on his family treasure hunting legacy—whether he liked it or not. When his father is killed on a dig as he’s trying to find the burial site of Alexander the Great, both the shame and the blame fall to Cairo’s shoulders. He has no choice other than to head a new expedition to find the lost king.

But now that the decisions are his, he’s going to go about the search his own way and he agrees to take history blogger Dillinger DeCosta with him. Dillinger has never visited the Middle East, nor any historically interesting place, for that matter. He’s only written about the past on his Absentee Historian blog. He convinces Cairo to take him with the group so he can finally be on the front lines of history-in-the-making. They agree to him documenting the trip in words, photos, and videos.

Along with Cairo’s twin brother, Memphis, and their best friend, Magnus, the group sets out to find Alexander, but Cairo and Dillinger find each other along the way. There’s ups and downs in their personal relationship in the story, but there’s also underhanded dealings by a competing archeologist and a big reveal about Dillinger’s past that may make finding their way to each other more impossible than finding Alexander.

This is my first book by this author and I enjoyed the pacing and the intriguing storyline. However, the main characters were a bit too “damsel in distress” for my taste. Some of their behaviors were very old-school romance novel. In fact, I could picture them more as heroines of an archeological dig dime novel than heroes in modern-day MM romance.

I’d recommend this book to those who like a sweet romance between two men who’ve lived their lives under their fathers’ thumbs and have found each other’s company compatible both on a friend level and a sexual level. There are sexy times in this story and there’s a Big Reveal that tears them apart and, eventually, good stuff that brings them back together. Personally, I wouldn’t have forgiven Cairo⎯the big drama queen who ranted and raged and slammed the door in anger at Dillinger⎯but Dillinger was much more understanding and was a sweetheart that Cairo didn’t deserve. The story ends on a happy note with their future together set. So win-win for readers who love that sort of story.

The cover is a photo of a handsome man set against a golden background with a distant view of the pyramids. It’s definitely attention-grabbing.