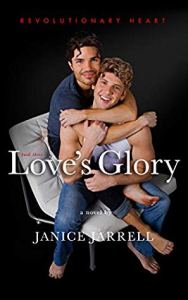 In October of 2017 cocky, alpha-male Irishman, Colin Campbell, Sergeant in Charge of the Special Assault Unit of the University of Virginia Campus Police Force, dove in front of a bullet meant for a University of Virginia student. The bullet shattered his thigh and severed his femoral artery, a wound which nearly took Colin’s life and left him temporarily disabled. His infirmities robbed him of the strength and athletic prowess which had been his for most of his life leaving him humiliated and bereft.

His partner, Joshua Abrams, a Doctor of Psychology at the Rainier Clinic in Charlottesville, never once left his injured lover’s side. He poured every ounce of strength and love he possessed into healing the magical Irishman whom he adored and was overwhelmed with relief and gratitude when Colin was taken off the critical list. Thinking that they had survived their trial, he took Colin home, believing that their happiness was now assured.

But like many injured police officers, Colin subsequently withdrew from his partner. Overwhelmed by feelings of shame and embarrassment, he devoted himself almost obsessively to the physical therapy with which he hoped to rebuild his strength and reclaim the life he had lost. Unable to share his pain and feelings of inadequacy, he shut Joshua out, leaving him to cope alone with the post-traumatic stress he suffered as a result of Colin’s shooting.

In the following months Colin and Joshua fought to keep their relationship alive. Although deeply in love, they felt powerless to cope with the after-effects of Colin’s injuries both to his body and to his pride as a man, and to heal the emotionally devastating PTSD with which Joshua suffered.

Love’s Trials tells the story of this painful and challenging time in Colin and Joshua’s life. As we join them now, Colin is still walking with a cane and still suffering the physical after effects of his injuries. But he and Joshua are both in therapy and are now dealing positively with the emotional and psychological damage they both endured.

They face their future side by side, determined to stand or fall together, as soul mates and lovers. This book follows them on their journey as they move toward the happy future they both long to share. They have moments of anxiety and intense emotion, but you can count on a happy ending. In fact, you can count on a happy read. In this book, Colin and his beloved Joshua have left their trials behind and now revel in Love’s Glory.

Love’s Glory is the third installment in Janice Jarrell’s Revolutionary Heart series and while it reads like the end of the story for Colin and Joshua’s main romance, it also opens op the next stage in their relationship and for a new couple’s story to begin.  This is definitely not a standalone novel as it rests firmly on the foundation of the previous stories,Love’s Magic and Love’s Trials which tell the story of Joshua and Colin’s initial meeting, rocky romance, their solid relationship and the traumatic events referred to in this story.  All remarkable tales and great reads.

And all culminating in this book and this stage in their relationship.  In a way, Love’s Glory is Janice Jarrell’s gift to her reader’s and this couple who have been through so much angst and pain and have now mostly emerged through the other side, entact and ready to move forward to the next stage in their lives.

Since it is not mentioned in the blurb, I will not give it away here in the review but there is a major feature of this novel and oh, my….it is the most wonderful, glorious thing to read in every way.  So many elements of this aspect of the story just shine.  From the families to the cultural aspects included to the religious.  I will tell you right now to bring your tissues! because you will be breaking them out.

Per usual, there is still some emotional and psychological hurdles to move through for this couple. Colin is still in rehab and Kathy’s death (his sister) remains a deep loss he’s never gotten recovered from. Joshua too has his own struggles to deal with.  The author beautifully and realistically (as always) shows Colin and Joshua communicating and (in an adult manner) working together to resolve as a couple the issues each is struggling with.  These characters are nuanced and believable, although Colin does have a bit of an Irish “glow” about him, so brightly does he shine at home and in Ireland.

Yes, we go to Killarney too (one of my favorite places), and home of the Campbells.  What a treat that turns out to be.  I could wish that Jarrell writes an entire series about the Campbell clan in Killarney because I grew to love them all so.  Here’s hoping she’s listening.

Love’s Glory (Revolutionary Heart #3) by Janice Jarrell is beautifully written, full of memorable characters on a journey of love you won’t forget.   I highly recommend this story and all the ones that preceded it.  I have listed them below.  Pick them all up and read them in the order they were written in order to get the most out of the stories and the couple’s journey.

Cover art: Robin Vulcich.  The couple on the cover is cute but not anywhere near the ages of Colin or Joshua who are in their 30’s, nor do I think they look like them.  So cute but definitely for another story.