Having chosen exile rather than face persecution at the hands of his family, Prince Stephan of Seveihar has finally found refuge in the south kingdom of Segor with his lover and former servant, Warren. For the first time in his life, Stephan is free to be who he really is, to explore his sexual identity and his fascination with all things feminine.

But it seems life has other plans, and the quiet happiness Stephan has run so far away to find is once again threatened by sinister forces from his past. Will Stephan and Warren’s newfound love be strong enough to weather the danger that could rip them apart forever?

The warm morning breeze carried the smell of sea salt, exotic spices, and the promise of a distant sandstorm.

Stephan breathed deeply, closing his eyes against the gentle currents, and leaned on the windowsill, offering his face up to the sun. It was not yet noon, but the heat was already building up. Soon the busy streets of the port city of Varta would empty, the denizens taking a brief respite during the midday hours to hide in the relative cool of their homes, away from the glare of the ruthless sun. At dusk, all activity would renew with rekindled vigor as the streets around the harbor filled with the cries of peddlers hawking their wares, the music of wandering performers, and the general hubbub of a large city going about its business. But for now, Stephan simply enjoyed the bright sunshine, which had been so rare in his native Seveihar, before he’d be forced to retreat to the shade of his rooms.

No, their rooms. He’d been living with Warren, his former footman and current lover, for the past six months, sharing the two cozy rooms in one of the quieter districts of Varta. The modest appointments were a far cry from the richness of his father’s royal palace in Sever, but luxury was low on Stephan’s priority list. These short months were the happiest he’d been in his entire life. Granted, at twenty years old, he was still at the beginning of his journey, but with his father gone and the rest of the family actively persecuting him, he’d had his fair share of misery.

Stephan sighed and closed the wooden shutters. Even so, the room was still softly illuminated, filled with translucent, soporific light. The hem of his white silk robe trailed after him as he made his way to the large writing desk, cluttered with sheaves of paper and different-colored inkwells. Warren, being the son of a merchant, was the one with the experience and a practical grasp for business, and he had been the one to suggest they invest the money left from selling Stephan’s extensive collection of jewelry in local commerce. For centuries, Varta, the second largest city of Segor, had been a crucial junction for the passage of goods between the deep south and the northern countries and provinces—including Seveihar and rival Esnia. With trade burgeoning in recent years, investing in independent shipping ventures seemed like a sound plan, although they were only now beginning to see any returns. None of it was enough to make a fortune, but for now, at least, they were able to live comfortably.

Stephan settled in a chair and pulled out a stack of letters he wanted to sift through one more time. While Warren was responsible for the finances, Stephan handled the records and correspondence. As a member of the royal family, he was well-versed in several languages, including Segati—a dialect spoken in Segor and along the long stretch of the southern coast. But reading and writing with a teacher weren’t the same as practicing the language among native speakers, and Stephan wanted to brush up on his communication skills as much as possible to be able to navigate the often-equivocal patterns of business negotiations with Segorian merchants and ship owners.

He was writing down some notes on a piece of paper when the door opened, and Warren stepped in, letting out a long-suffering sigh as he closed the door and took off his sweat-soaked scarf.

Stephan smiled as he rose to meet him. He threw his arms around Warren, planting a quick kiss on his lips. Warren’s skin, flushed and hot, still carried traces of salt and fish smell.

“I missed you,” Stephan said playfully.

Warren grinned in response, taking Stephan’s hand and kissing his fingers. “I’ve only been gone a few hours. And I still stink from the docks.”

“I don’t mind.” Stephan nodded at the leather-bound ledger sticking out of Warren’s coat pocket. “Any news?”

“The ship should arrive any day now. With the price of silk going up, we should make a nice profit off this consignment.”

“You might be the one to blame for the increase in prices,” Stephan teased. “You didn’t have to buy me quite so many dresses.”

“Of course I did. They make you happy. And I love seeing you in them.”

Warren let go of Stephan and threw the ledger on the desk. He was still smiling, but Stephan could sense tension in the rigid set of his shoulders and the way his smile quickly turned from genuine to strained.

“What’s wrong?” Stephan asked. “Are you worried about the ship being delayed?”

Warren shook his head and sat on the long bench beside a low dining table. He picked an orange from a fruit bowl and began peeling it.

Stephan sat back at the desk, tucking his long hair behind his ear in a nervous gesture. He knew he wasn’t going to like it.

“The war has started, hasn’t it?” he asked quietly.

Warren nodded. “Rumors spread fast in this city. It seems the first thing your brother did after ascending to the throne was declare war on Esnia.”

Stephan swore softly. His older brother, Robert, had been warmongering to garner political support, but until now, Stephan had clung to the naïve hope he wouldn’t go as far as actually starting a full-blown territorial war with their neighbor. Or at least that his advisers would stop him from making such a foolish move, if he wasn’t prudent enough to restrain himself. Even after fleeing his homeland and abandoning his title, Stephan couldn’t help but feel somehow responsible for the wellbeing of its people. Waging a war when most of them were already struggling with the increase in waterway taxes his uncle Rowan had decreed last fall would only add insult to injury.

“That wasn’t what got me worried, though. There’s more.” Warren dropped the peelings on the table and frowned at the naked fruit, as if surprised it turned out to be an orange after all. “There’s talk about Seveiharians in Varta. Apparently, an envoy arrived at the Governor’s palace two days ago. They were trying to keep it secret, but again, Varta is anything but surreptitious.”

Stephan shrugged. “So? They must be here to amend trade agreements. War changes demand, and the usual shipping routes would need to be altered if the Zenna River proves too dangerous now for regular transport.”

“No doubt.” Warren handed him a few orange slices, and Stephan popped them in his mouth. He flicked his tongue across his lips to lick away the juice, noting the way Warren’s gaze took on a familiar intensity as he followed the tiny movement.

Warren’s unmistakable interest sent a jolt of heat down his belly, triggering his own arousal. He licked his lips again, this time in an involuntary response to the thought of what he and Warren could be doing to while away the sultry midday hours. But apparently Warren wasn’t done yet. 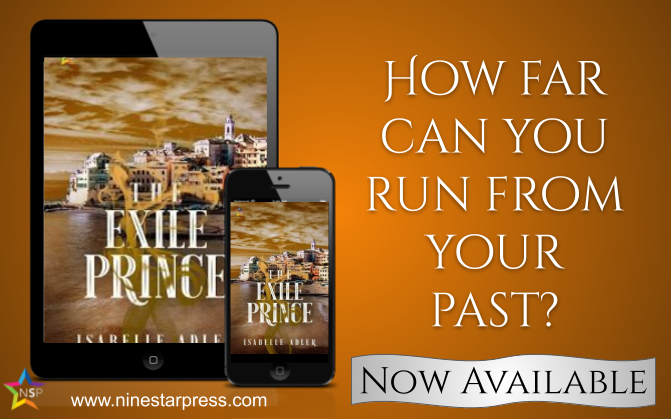 A voracious reader from the age of five, Isabelle Adler has always dreamed of one day putting her own stories into writing. She loves traveling, art, and science, and finds inspiration in all of these. Her favorite genres include sci-fi, fantasy, and historical adventure. She also firmly believes in the unlimited powers of imagination and caffeine.