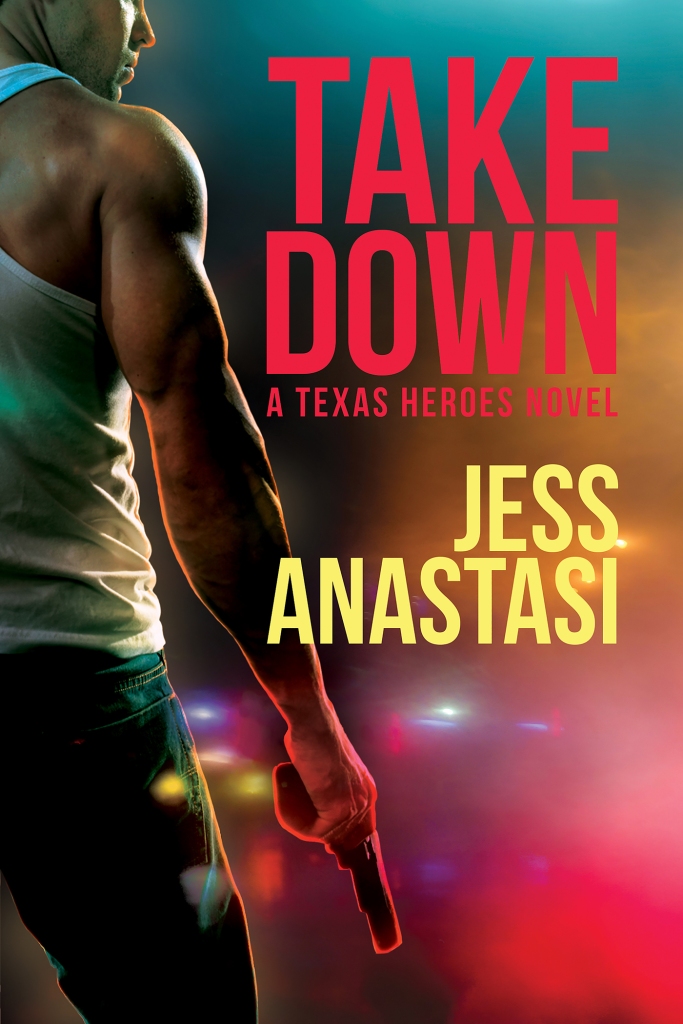 Scattered Thoughts and Rogue Words is happy to host Jess Anastasi here today on tour for her latest story Take Down, the first in her new Texas Heroes series.  The author has brought along a excerpt for our readers.  Welcome and Thanks, Jess.

Attraction sizzles when Danny Jones sets eyes on Deputy Jake Perez, despite meeting over the discovery of a mutilated corpse. But being with Jake could cost Danny his family, and being with Danny could cost Jake the very thing that brought him to Everness, Texas—revenge against the man who killed his brother. How much will Jake sacrifice to take down a psychotic criminal and finally see justice served?

After college, Danny thrived as a gay man in Houston. But when his mom’s cancer brings him back to small, conservative Everness, he must go back into the closet or risk the wrath of his abusive father—a choice made even harder when Danny starts to see a future for him and Jake.

As the body count rises and Danny becomes a target, Jake is caught between his vengeance and protecting the man he loves. He never wanted to end up in a backward town like Everness, but Danny is the best thing that ever happened to him. Jake needs to keep Danny safe as his secrets catch up to them—especially when the threat might be closer to home than they imagined.

DANNY JONES lifted his aching head, blinking away the tears stinging his eyes, mind completely blank as he tried to make sense of what’d just happened.

There was a white blob in his face, so he groggily reached up and pushed it down, only to be confronted with the sight of the cracked windshield and steam rising from the crumpled front of his pickup truck.

Oh shit. It all came back in a single flash, like a switch flipping in his head. He’d been on his way to deliver a gasket to old Mr. Miller, who lived on a farm about half an hour out of town. Danny had been tooling down a dirt back road when he’d rounded a sharp bend and seen the stationary sedan too late.

Even as his heart had launched into his throat and he’d stomped on the brake, his truck was already slamming into the back of the other car. He couldn’t remember the airbag exploding in his face, but from the way his nose was stinging, it’d hit him good. Or had he hit it?

His hands were shaking as he reached down and unclipped the seat belt. His neck was sore, and his whole body felt weird. The door was jammed, so he rammed a shoulder against it to get it open, and then he practically fell out of the cabin when it suddenly gave way. His first few steps away from the truck weren’t exactly steady, but as he forced himself to take a couple of deep breaths, the shock began to wear off and his mind started working again.

The front of the pickup was completely totaled. And as the son of a mechanic, he could say that without a single doubt. He hurried over to the sedan he’d crashed into, the back end crumpled almost into the back seat.

As he approached the front, he could see a figure slouched behind the wheel.

Oh Jesus. What if he’d killed someone? He yanked open the door but then froze in horror. There was blood everywhere. Covering the front of the man’s chest, splattered across the windows and upholstery. Congealing in dark blobs in some places, but dried and cracked where the sun had been blazing down on it on the top of the dash. The man’s dark eyes were open and staring sightlessly ahead, expression twisted into a permanent contortion of fear or pain. The smell was indescribable, and his stomach lurched violently.

Danny stumbled back a step, spinning away from the gruesome sight. It took three tries to yank his phone out of his jeans because his hands were shaking so much. When he finally pulled it free, it dropped from his numb fingers to land in the dirt at his feet.

He cursed, crouching to pick it up, but then he didn’t have the power in his legs to push himself up again. He stayed crouched there, stomach churning with nausea as he dialed 911. He forked a hand into his hair, staring at his shoes as the call connected.

Despite the way his head was spinning, he was almost detached as he requested the county sheriff and explained what had happened in a too-calm voice. When the 911 operator disconnected the call, he shifted back to sit heavily on the ground and then hung his head in between his knees, breathing fast as dizziness wound tighter and tighter around him. He couldn’t get the bloody picture of the dead man out of his head. And the smell—

The sounds of a siren registered, gradually drawing closer, until it was accompanied by the crunch of gravel under tires. Distantly, Danny told himself he should get up, but it was all he could do in that moment to breathe and stay upright.

“Are you okay?” a deep voice asked from above him. A moment later, a hand touched his shoulder. “Are you injured?”

His hands and feet had gone numb, like he was losing contact with his body. He shook his head, sure he was a second away from passing out like that one time he’d been blindsided by a defensive linesman during a football scrimmage back in college. The coach had reamed him later because he hadn’t been paying close enough attention.

“You’re hyperventilating. You need to calm your breathing.” A hand landed on the side of his face and urged his head up. It was a deputy. Not much older than him, with short, dark, wavy hair, deep bronze skin, thick, dark eyelashes, and golden-hazel eyes.

Danny held his gaze, the deputy’s calm and confident stare anchoring him as he breathed slowly several more times while the deputy counted in a deep soothing voice.

Once the dizziness had ebbed away, he closed his eyes.

“Are you okay now?” the deputy asked.

“Not even close,” Danny replied, his voice scratchy as he focused again on the man before him. “But I’m not about to pass out, so that’s a plus.”

The deputy’s smile widened. “Think you can stand?”

Danny nodded, so the deputy held out a hand and helped him to his feet.

“What happened?” The deputy stepped back, resting his hands on his utility belt, like he’d snapped into business mode.

Danny glanced over his shoulder at the wreck. Shit, he’d had that truck since he was seventeen, spent hours under the hood rebuilding the engine. It hadn’t looked like much on the outside, but inside it purred. Would it be worth trying to salvage? It looked like a write-off. Of course, maybe he should have been more concerned about the dead body, not the pickup he’d been driving for six years. The reminder of what he’d seen made acid burn in the back of his throat and he swallowed, refocusing on the deputy.

“I was coming down the road, and when I rounded the bend, the car was just there. I didn’t have time to stop. Slammed right into the back of him. And when I went to check—”

He broke off as his stomach churned hard. He tried to block himself from seeing the image in his mind again. Didn’t work. He got the feeling that it was going to take a lot of drinking or therapy to get rid of the picture now laser-printed into the back of his eyelids.

“I’m sorry you had to see that.” The deputy was looking like he wished he hadn’t seen it himself, lips pressed together and features tense.

“He didn’t die from the accident, did he?” Danny was already certain, but he needed the officer to tell him he hadn’t been responsible for that man’s death.

“No, he was already dead before you hit his car. Probably for half a day at least judging by the dried blood.”

A familiar sweet-sour smell hit his sinuses, and he glanced at the wreck. Danny was momentarily distracted out of his shock. “Smells like—”

Even as the deputy said the word, flames sparked from beneath the hood of Danny’s smashed pickup.

The deputy wrapped both arms around him and they hit the ground, Danny ending up on the bottom as all the air left his body on impact. There was a sudden burst of heat and a deafening boom cracked over them, leaving him instinctively ducking his head into the crook of the deputy’s neck, who’d brought his arms up to cover both their heads. In the seconds after, small, fiery pieces of debris rained down around them.

For a few suspended moments they were frozen, and Danny distantly realized he wasn’t breathing again, this time from almost getting exploded. Wouldn’t that have just made his day? Finally, though, the deputy pushed up on his arms to look down at him, their faces only inches apart.

“Are you okay?” The deputy was breathing hard, and Danny could feel each inhale where their chests were pressed together. His heart was pounding like he’d run five miles.

“What’s your name?” he heard himself ask. Since the guy had just saved him from being barbequed, it seemed like they should be on a first-name basis.

“Jake,” he answered in a low, quiet voice. “Deputy Jake Perez. You?”

“Danny. Daniel Jones. But everyone calls me Danny.”

Jess Anastasi has been making up stories ever since she can remember. Though her messy handwriting made it hard for anyone else to read them, she wasn’t deterred, and now she gets to make up stories for a living. With a multi-award-winning science fiction romance series to her name, her books feature larger-than-life heroes with relatable vulnerabilities who find themselves in situations that push their resolve to the limit. Jess is a tea addict who loves loud music, dancing in her kitchen, and a good book on a rainy day. A fangirl at heart, she probably spends too much time watching too many TV shows. Jess lives in regional Victoria, Australia. Find out more about Jess and her upcoming releases at www.jessanastasi.com.