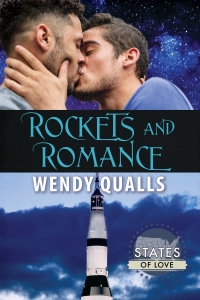 Love isn’t rocket science… or is it?

Julian Barlow has finally landed his dream job working for NASA. The catch? He has to move to Huntsville, Alabama—a daunting prospect for a gay pescetarian from Los Angeles who’s never been south of the Mason-Dixon line.

Fellow engineer Cody Ewing is an Alabama boy through and through, and Julian’s casual assumptions about the South in general and Southern homophobia in particular makes it dislike at first sight. Then NASA throws them together on a months-long project, and they have to make it work.

Forced to rely on each other, the two men develop a tentative friendship that becomes something more as Cody shows Julian Alabama’s good side. Julian’s insistence on secrecy and Cody’s hot-and-cold act could scuttle their chances before they ever get off the ground, though.

This was a nice idea for a story but I’m not sure it connected well for me.  Julian is thrown in the deep end moving to the south at the last minute.  Cody has grown up in Huntsville and embraces what goes on in his hometown.

This story was Cody and Julian getting along then Julian making assumptions/hurting Cody rinse and repeat.  I guess I couldn’t get past all the negative assumptions Julian made about his new home and how what Cody overheard him saying at the beginning was never addressed.  I don’t know, I love how open Cody was and the little bit that Julian actually opened up but I couldn’t get passed how quickly Cody would forgive Julian and then it just happened over and over again.

The cover art by Brooke Albrecht is cute and I love the visual of Cody and Julian together.

Series: A States of Love Story