Paint It Black (Beneath the Stain #2) by Amy Lane

Scattered Thoughts and Rogue Words is happy to host Amy Lane here again, talking about the latest story in her Beneath the Stain series, Paint it Black. Welcome, Amy!

As we read Beneath the Stain, we get the feeling that Cheever is an entitled punk, a user, a grabber, someone who doesn’t recognize what sacrifices his brothers have made for him and takes advantage of what he’s handed.

As we read through Paint it Black, and see Cheever as a young adolescent, miserably bullied, assaulted, alone, we start to see him as the least important puppy in a pack of over the top extroverts.

Both things are true.

Neither of them are true.

Cheever was the center of the older boys’ being. The sent money to him, they worried about his schooling—they worked their asses off so Cheever didn’t have to go through school like they had, bullied and angry. But in order to do that, they had to leave Cheever and his mother and go on the road.

And even if a kid gets the logic of how that happens, he’s not going to feel that in his heart.

By the time we catch up with Cheever in Paint it Black, eight years have gone by—and the brothers have tried to make amends. They’ve taken care of all Cheever’s material needs, and they offer, month after month, year after year, olive branches to him to try to welcome him into their fold. They have bonded after years in the band, years on the road together, even their years in poverty when Cheever was still a little kid—and they’re looking at their little brother helplessly, thinking they have nothing in common.

Cheever is looking at them helplessly, thinking all the awful things he went through are so awful, they wouldn’t love him if they knew.

And we, the reader, realize that if Cheever can only tell them, he’ll realize that his brothers, who love him, are the perfect people to understand.

And that Blake Manning, who has fallen in love with him, will get it better than most.

And that’s the painful beauty of giving multiple perspectives of the same story. Because nobody’s a villain. Everybody is just doing their human best. We know that when Mackey and the others left, they were in rock and roll hell. We know that Cheever was all alone and drowning.

They think the other one had it best.

It’s our job to reconcile the perspectives, to suss out the truth in the different experiences. And when we do that, we realize that there are no least important puppies in family. Just lost brothers who need to be welcomed back to the fold.

A Beneath the Stain Novel

Everybody thinks Mackey Sanders’s Outbreak Monkey is the last coming of Rock ’n’ Roll Jesus, but Cheever Sanders can’t wait to make a name for himself where nobody expects him to fill his famous brothers’ shoes. He’s tired of living in their shadow.

Blake Manning has been one of Outbreak Monkey’s lead guitarists for ten years. He got this gig on luck and love, not talent. So hearing that Cheever is blowing through Outbreak Monkey’s hard-earned money in an epic stretch of partying pisses him off.

Both men have to make peace with being second banana in the public eye. Can they find the magic of coming absolute first with each other? 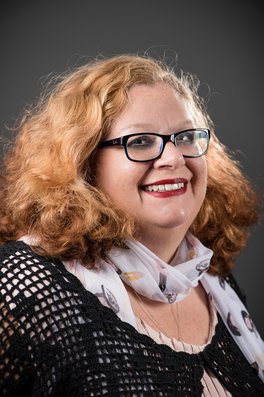 About the Author
Amy Lane lives in a crumbling crapmansion with a couple of growing children, a passel of furbabies, and a bemused spouse. She’s been nominated for a RITA twice, has won honorable mention for an Indiefab, and has a couple of Rainbow Awards to her name. She also has too damned much yarn, a penchant for action-adventure movies, and a need to know that somewhere in all the pain is a story of Wuv, Twu Wuv, which she continues to believe in to this day! She writes fantasy, urban fantasy, and gay romance–and if you accidentally make eye contact, she’ll bore you to tears with why those three genres go together. She’ll also tell you that sacrifices, large and small, are worth the urge to write.