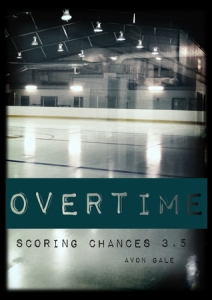 This short story (approximately 4000 words) takes place after the events of Power Play and before Empty Net. It features Spartanburg Spitfires’ goalie Isaac Drake — as well as a few other familiar faces — and is available as a bonus for Avon’s newsletter subscribers.

You can access the story in three different formats here: http://www.instafreebie.com/free/2jdBs

Overtime is a short story that bridges Power Play and Empty Net.  It’s an important one because it features Isaac Drake, the Spitfires goalie.  He’s been an important character in this series, especially in his almost father/son dynamic that has evolved with his  coach, Misha Samarin.  Their stories and backgrounds so similar despite the differences in countries.  And the readers have been able to watch his character grow and his personality strengthen under Misha’s tutelage and support.

Here, we get another important step in the Spitfires overal team definition as it evolved towards its goal as a champion team and Isaac’s barriers that they have faced and may face again.  It also shows, yet again, another facet to their GM Belsy.

I am so addicted to this series and characters.  I just can’t get enough.  Well written, explosive ..on and off the ice ..by an author who knows the game and loves the men who plays it.

May this series never end.

Save of the Game