Stained Hearts (Links In the Chain #3) by Parker Williams

Have you ever put a story away, thinking it just didn’t work?  Then years/months/whatever later inspiration struck and you loved it?  Is there a title we would recognize if that happened?

I wrote several stories when I was younger, including one called ‘Free at Last’. It was the story of Grant Danek and Russell Studler, two teens who were embroiled in coming out and falling in love. Oh, and murder. When I was a teen, I loved the story, because of a character named ‘Aunt Helen’, who was Grant’s mother’s sister. When Grant’s parents died, she stepped in and became his guardian, and one of his best friends. She knew he was falling for Rusty, and she was totally cool with it. What she wasn’t cool with was someone killing a man on their doorstep.

I found it again not too long ago, and thought ‘oh, hell no’. I’ve learned a lot from many different people, and the story would need a complete rewrite if I ever wanted to do anything with it.

Though I do still love Grant and Rusty.

Have you ever had an issue in RL and worked it through by writing it out in a story?  Maybe how you thought you’d feel in a situation?

Yes! Several years ago, I was in a wicked car accident (cherry picker through my windshield). A year after that, Paul and I were rear-ended at a stoplight. Because of that, I wasn’t able to continue doing my job as a waiter (couldn’t carry heavy trays because of the strain on my back). Due to that, the hotel I worked at gave me a job as a cashier. I hated hated hated it. And what made it worse was Valerie Ricks, one of the servers. She was awful. Hateful, mean, spiteful. She made every day at work a chore, and I grew angrier with everyone because they wouldn’t do anything about her.

So, even though I still can’t stand her, I guess I kind of owe her a debt of thanks.

Ever drunk written a chapter and then read it the next day and still been happy with it?  Trust me there’s a whole world of us drunk writers dying to know.

Drunk? No. I don’t drink. On the other hand, the doctor had me on some pills that made me a drooling mess (think Homer Simpson). I did some writing, and in the morning when I woke up, I had absolutely no clue what the hell I had written. They weren’t even words, just strings of gibberish.

If you could imagine the best possible place for you to write, where would that be and why?

Last year KC Wells was in Milwaukee and she stayed at an Air B & B. The place was gorgeous, and I loved sitting at the dining table with her and working on one of the Secrets books. To me, that place would have been perfect as a writer’s getaway.

With so much going on in the world today, do you write to explain?  To get away? To move past? To widen our knowledge? Why do you write?

I write as an escape from the world around me. There is so much awful news that I like to sink into a story and let it take me away.

What’s next for you as a writer?

So Stained Hearts is this month, Secrets #4 (On the Same Page) with K.C. Wells is in December, and then next year I have a contemporary called ‘Family Matters’ in early 2020, and then a paranormal MPREG called ‘The Night Wolf’ later.

After that, KC and I are going to be working on Secrets #5 with a character we introduce in book four and a brand new one that is first seen in book 5.

I’m also working on book two of the Night Wolf saga. Funny thing about it. The series was supposed to be lighthearted fun, where a runaway wolf found refuge in a pack and fell for the Alpha. But… Yeah, always a but.

During a scene, the one guy said, ‘You know, it would be awesome if I ended up pregnant.’ And I said, ‘Seriously?”

Apparently he was very serious, because the next thing I knew, he was with child. Oh, and that lighthearted romp? Yeah, no. All of a sudden there’s a crazy Alpha who wants Sean (he’s the one who ran from the Alpha) back, and he’s willing to kill to get his way. 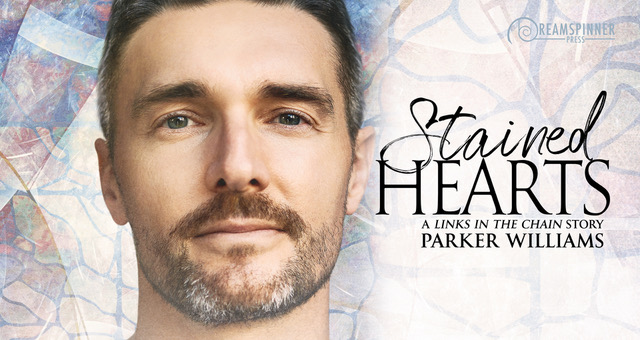 Can two hearts stained by past pain find healing together?

Tom Kotke held his husband of twenty-five years on the day he died and spent nearly a year adrift. Determined to force Tom back into the world, his family takes him to the Park View Diner, where he meets young stained-glass artist Aiden Dawson. For a brief moment, Tom doesn’t think about his deceased husband—a terrifying prospect.

Slowly, Aiden draws Tom out of his shell and helps him feel alive once more. But Tom isn’t the only one who’s suffered. Aiden fears no one sees beyond his wheelchair. Even if Tom can convince him he’s different, they’ll still have to overcome their age difference and a secret that could destroy their future together.