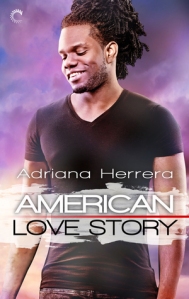 The third in what continues to be a top favorite series, the author brings us a completely different sort of romance from the others in the series. Set in Ithaca, New York, home of Cornell University, this time it’s Patrice’s turn in the spotlight, and he certainly shines. Oh my, does he shine! A quick word about the cover: it’s to die for! The stunning black man, his locs tied back, the smile on his face, the dimples… Oh my gosh, he’s gorgeous and should definitely attract attention to this book. I know he attracted my eye. And throughout this story we learn he’s as beautiful inside as he is outside.

This series features four young men who grew up together in New York City. All sons of Caribbean immigrants, the men are of an age to strike out on their own. In American Dreamer, Nesto pursued his dream by taking his food catering business to Ithaca, where he met the man of his dreams. In book two, Camilo Santiago Briggs, or Milo to friends and family, is a social worker and project manager in a nonprofit that serves victims of domestic abuse. He meets his dream man in the City in the least likely location—his workplace. Their story is told in American Fairytale.

Now it’s time for Patrice, who has been hired as a professor at Cornell University—the greatest achievement of his life. He wants to make his momma proud since she worked two jobs to raise him after they fled from Haiti on their own when he was a child. Patrice is not only a professor, however. He’s also an activist and his Black Twitter feeds have thousands of followers. Now, shortly after arriving in Ithaca, he learns about the narrow-minded cops who pull over young men for “driving while black.” And Patrice is full on board with bringing that to an end.

Last summer, Patrice showed up in Ithaca to help Nesto set up his business and at the same time met Easton Archer, the tall, gorgeous, intelligent assistant district attorney. Now he’s back and he’s not sure he and Easton stand a chance, because Easton’s job puts him in conflict with Patrice’s activism, and though they are sizzling in the bedroom, their personal and professional lives continue to collide until a single traffic stop sends them into disaster.

Just like with the previous books, there’s so much to like about this story—the writing, the pace, the Haitian cultural information, the relationship-building, the secondary characters, and the core message of drawing strength from family and friends. When Patrice finally lets his guard down, he and Easton face a very nice happy ever after.

I’m definitely looking forward to more from this author in future and I very highly recommend this book to all lovers of MM romance, and especially to those who enjoy stories so rich in cultural heritage that readers are inspired to learn more.