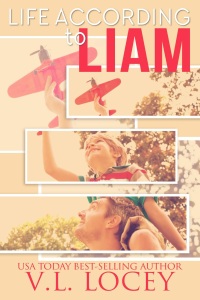 There’s always that chance that your heart’s desire is one click away.

Someone needs to pinch web designer/humor blogger/Pittsburgh Ravens mega fan Mike Kneller. Hard. For years, Mike has been living his life for his younger sister Kelly and his four-year-old nephew Liam. He’d opened up his home to Kelly when she found herself pregnant at sixteen and facing having a baby alone. Sure, his days are filled with skinned knees, snotty noses, and the occasional mishap with stuffed superheroes, but he’s perfectly happy because he loves Liam as much as he loves his baby sister. Giving up a social life and going to bed alone is a small price to pay. Little does he know that someone on the Ravens is about to show Ravens goalie Bryn Mettler one of his vlog posts. Of course he’s not going to believe it when his phone rings and the world-famous netminder—and his goalie crush—is on the other end. I mean, life doesn’t work that way for ordinary, hardworking uncles like Mike. Does it?

Bryn Mettler is a superstar athlete and a major part of the Pittsburgh sports society. He seems to have it all. He’s well-dressed, handsome, wealthy, an elite goaltender, a famed philanthropist, and the holder of numerous medals and trophies. To date, there are two things that have avoided him: lifting that big shiny silver cup over his head and finding a man to settle down with. Now that he’s over thirty, Bryn is finding the gay club scene is wearing thin. His teammates’ wives have decided it’s their duty to the team—and to Bryn—to find him Mr. Right. He’s relatively sure the man who’ll capture his heart surely won’t be found on a humor blog. Funny how life likes to take the things that you’re most certain about and flip them—and you—on its ear. When Bryn meets Mike, he is instantly drawn to the warm, funny, sexy man who shares his hectic days with thousands of Pittsburgh natives. Now he just has to convince Mike he is who he says he is so he can get to know him better. Thankfully, Bryn isn’t a quitter. But does he have what it takes to leap into life with Mike, Kelly, and Liam?

You know you’re in for a treat when you start to laugh pretty much right from the start of a story.  And that happens with Life According To Liam by V.L. Locey.  From the moment you are introduced to Mike and his  nephew Liam,  and yes, Liam’s mom Kelly (Mike’s sister), their warm, loving family dynamics pull you so thoroughly into this story that I almost forgot I was expecting a romance.  The interactions between Mike and Liam are realistic, downright hilarious, and will feel familiar to anyone who knows four year olds.  VL Locey has this locked down!

The characters and dialog are spot on as are the situations.  Bless that plumber!

Then we get Bryn Mettler in the bargain.  Wow.  Family and hockey.  Be still my heart.  Bryn is interesting because as a older hockey player, he is trying to maintain his position, his focus and his physical condition at a time when all that is becoming harder.  And the author lets us into his mindset because finding love at the same time?  With someone who also has more responsibilities, like a younger sister and a small child?   Doesn’t help focus.  Especially when you have to see what that sort of family arrangements truly mean.

The working out of the relationship between Michael and Bryn was lovely, as was seeing Bryn with Liam.  What I really wished for was that this story was much longer.  Yes, a wealth of riches! I wanted to see Bryn thoroughly swamped with living with a 4 yr old instead of getting a moderate education but the author made a good point of separating out Michael’s need for a life from Kelly’s need to be independent. Will I say more?  Oh know….read the book.  You will want more of this family too.

I love this story.  It’s a great heartwarming, feel good novel and I am thinking that the audio would be hysterical to listen to as well.  And yes, I’m definitely recommending it.

Cover art: Meredith Russell is so well done and heartwarming that it makes you want to read the story from the cover alone.  Well done.