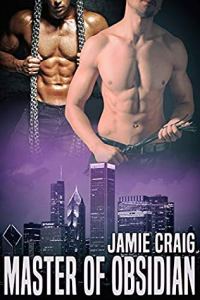 One issue is the plot is obviously just to move them from one sex scene to another, which is a shame because there could have been something more interesting done with what is here. For instance, seeing more of their actual relationship before being thrown into their sexual relationship would have given this a more solid basis. More UST before they got together as well as any indication at all that Jesse was into pain before they have sex, would have made it less jarring. Seeing Jesse’s fantasies and revelling in Gideon’s angst to control himself would have added more depth. For me, the distressing part was no aftercare, even when Jesse had open wounds. Gideon doesn’t really treat Jesse with the care, the respect, the reader is told he has for him; not just in their personal interactions, but with the case they are working, where he doesn’t give Jesse vital information. At least that is acknowledged after the fact, it’s just that so much of this really should have been talked about before all the events that happen.

Between sex scenes, most of the information is told to the reader as a statement right before they need it, rather than being seen in flashbacks. I’m going to mention something that is not related to the plot, so it’s not a spoiler, but would turn many people off: I want readers to be aware there is a scene where Jesse gets off to Gideon’s snuff porn. This caused an issue for me: why is Jesse expecting better behavior from John, the blackest of mages, but then turns around and has no issue with Gideon’s past? I guess for those raised on a TV show with Angel and Spike, maybe this isn’t a big deal? But the reader doesn’t get to know enough of this supposedly good Gideon that is trying to save humans before being introduced to who he used to be. Then, there is the torture scene which really points out the problems with the world-building. One assumes, if the suspect were human, they would have involved the police, but since the suspect is a vampire (demon), they can do whatever they want to her? Obviously humans, mages, and vampires know about each other and coexist, but that is all the reader really knows about this world. In the end, I was left with a few steamy sex scenes and characters that are a bit twisted and not necessarily likeable. Even Jesse seemed more dangerously obsessed with Gideon rather than in love with him, enough to blur ethical lines and basically do whatever he wants as long as Jesse gets what he wants from Gideon.

I think for maximum enjoyment, this should be read as a series of sexual fantasies without a lot of expectations. Since it’s about vampires, expect a lot a blood. Also be aware this has a m/m/f scene, violence, torture, and Gideon sharing Jesse, so they are not monogamous in the traditional sense.