Dominant Bradford’s story is one defined by sudden opportunity, unimaginable heartbreak, and new-found purpose. His calling is to provide a safe and supportive environment for men in the lifestyle. Bringing Doms and subs together is his superpower, yet he feels fated to be alone himself.

In this prequel to the series, you’ll not only discover Bradford’s own history, but also how Bradford is first drawn to Nikki, a beautiful and hungry young man living on the streets, and the unexpected ways Bradford grows and changes while helping Nikki understand a world of strange, new desires.

Deviations readers already know outcome of Bradford and Nikki’s journey together. Soft Limits is a deep-dive into Bradford’s story, into what makes the Dom tick, and how he ended up with ownership of the club. It also introduces Nikki, the sub that tests Bradford’s patience, steals his heart, and soothes his soul. 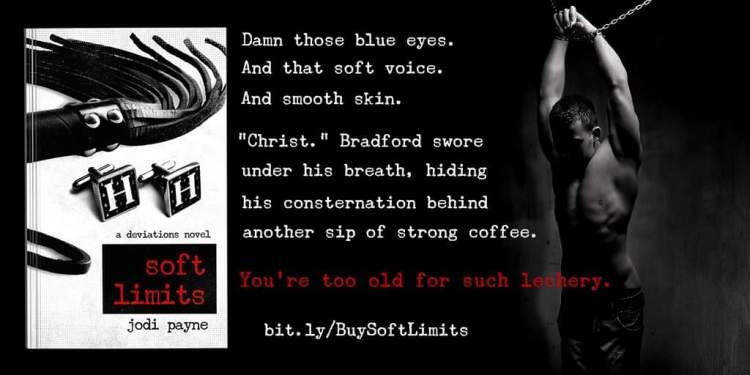 Despite the rather dubious rationale surrounding the boy’s hiring, Nikki turned out to be a very reliable employee. He showed up on time, worked as much overtime as needed without complaint, and in the month that he’d been staffed in the club’s kitchens, he hadn’t missed a single day.

For his part, Bradford hadn’t seen so much of the inside of his kitchens since he’d taken over management of the club years ago. Something brought him in nearly every day now. At first it was under the pretense of checking in on Nikki, getting a report from the head chef, or some such business-related excuse. When that became too obviously unnecessary, he found other reasons to stop in.

“Can I help you, sir?” Chef asked as he came through the door from the main dining room.

“The boy still seems to be working out, hm?”

Chef looked up from his paperwork to glance in Nikki’s direction. “Reliable, minds his own business, follows directions, quite capable.”

“Did you have a concern, sir?”

“No, I just…he is of particular interest to me, if you must know, Reggie.” Bradford set a tray and a glass of water down on the worktable. “These were left in my office.”

“Master Bradford, I am positive one of your house boys can handle such mundane errands for you,” Chef teased. “It’s their pleasure to serve, after all.”

Bradford raised an eyebrow. Reggie had been with the club for a long time and ran a tight ship. He shouldn’t have been surprised that the man was suspicious. “Watch yourself, boy, or I’ll have to take a spatula to your ass again.” That had been a most creative evening.

Chef cleared his throat and was suddenly very interested in a certain form on his desk. “Yes, sir. Thank you, sir.”

Apparently, the staff was observant. That wouldn’t do; it didn’t reflect well upon him at all. So, one afternoon, after teasing a house boy into telling him what time Nikki usually took his break—and then rewarding the boy with a spanking—he decided to have a smoke behind the club. He didn’t smoke often; it was an affectation mostly, but he enjoyed it when he chose to indulge. He took a long drag as Nikki slipped out the back door, trying to look nonchalant. He would have failed with literally anyone else in the club except for Nikki himself, as he had no need to smoke outside with the dumpsters.

“Hey.” Nikki greeted Bradford with a smile and opened up a bottle of Coke.

“Oh, hey there.” Bradford tried to sound casual but remained inwardly appalled at himself. He was the Master of this gentleman’s club after all—he had final say on everything that had to do with anything and anyone, and yet here he was, making up excuses and stalking this young man like a starry-eyed teenaged girl. “On break?”

It’s rather warm out here, too. Bradford took another drag. This felt like role play. It felt like a scene he’d taken pains to set up. A powerful and handsome gentleman (if he did say so himself) and a pretty little twink meet “accidentally” in an alley. Only this was actually happening, and he was certainly not in control.

It would be humiliating should any of his contemporaries find out.

“How is everything going for you?” There. That was a reasonable question for an employer to be asking. “Settled in?”

It didn’t appear that Nikki was one for many words. That was just as well—he didn’t need to hear the boy speak; he just liked to look. He let his eyes shamelessly peruse Nikki’s body. Nikki was shorter, and although those shoulders were still narrow, the boy didn’t look as bony as when he’d first picked the young man up.

Hired. Not picked up. Hired.

JODI spent too many years in New York and San Francisco stage managing classical plays, edgy fringe work, and the occasional musical. She, therefore, is overdramatic, takes herself way too seriously, and has been known to randomly break out in song. Her men are imperfect but genuine, stubborn but likable, often kinky, and frequently their own worst enemies. They are characters you can’t help but fall in love with while they stumble along the path to their happily ever after.

For those looking to get on her good side, Jodi’s addictions include nonfat lattes, Malbec, and tequila any way you pour it. She’s also obsessed with Shakespeare and Broadway musicals. She can be found wearing sock monkey gloves while typing when it’s cold, and on the beach enjoying the sun and the ocean when it’s hot. When she’s not writing and/or vacuuming sand out of her laptop, Jodi mentors queer youth and will drop everything for live music. Jodi lives near New York City with her beautiful wife, and together they are mothers of dragons (cleverly disguised as children) and slaves to an enormous polydactyl cat.