Title: Pulse of My Heart

Vincent Franklin’s last mistake had a body count. Now, he’s back on the fireline with something to prove to his fellow firefighters and most of all to himself. But when a sexy Irishman with talent and a camera captures him in a weak moment, he puts Vince’s heart at risk.

Still, there’s something about Aidan that attracts Vince and stirs up feelings he would have preferred to leave locked up and untouched in a dark corner of his heart. Then, after he, and the world, believe Aidan is killed in a tragic accident, Vince struggles to find the courage to love again. His chief worry: Does a screw-up like him even deserve to love again?

Pulse of My Heart
Jessi Noelle © 2019
All Rights Reserved

Christmas Eve, 2019
Vince was breathing hard. Sweat beaded on his forehead and rolled downward, catching in his eyebrow as he groaned in pleasure and release.

“Holy shit, Mac,” he said as the twitching slowed, and he melted into the body under him. He nuzzled the ear of his partner and tenderly kissed the spot just below, where the neck melded into that beautiful head.

“Mmm,” his partner purred, hips moving languidly around his trapped member and drawing another gasp of pleasure before releasing him. “Merry Christmas, my darling.”

“Are you my night-before-Christmas present?” he asked. “Because I’m afraid that if I stir any creatures—even a mouse—I’ll find this sugarplum is a vision dancing in my head.” After the loss a year ago, and everything he’d been through since, this felt surreal.

Mac gave him a coy look—the one that tugged sexy-feel threads in his chest—then flipped over beneath him and wrapped arms around his neck, lacing fingers through Vince’s short, butterscotch hair. “Sugarplum, huh? Ah, you do know how to flatter the guy below you who is still slightly incoherent from recent…activities.” He pulled Vince down for a kiss, tongue snaking out to lick the sweat off his lips and making Vince groan a little at the image. He cocked his head, raised his eyebrows, and Vince could feel himself stirring again, hardening against the leg resting on him.

Vince looked down at him with wonder. “What did I do to deserve you? You’re so beautiful, and smart, and everything I’m not.”

“Don’t get it twisted, darling,” he drawled as he framed Vince’s face between his hands, “I’m the lucky guy who snagged the hot firefighter who defines straight-up sexy, pardon the hetero pun.” Mac softly placed his lips on Vince’s, starting at his forehead and working his way slowly, so agonizingly slowly, down.

In a flash of searing heat, Vince’s tenderness was replaced with hunger and need. Mac grinned wickedly at Vince’s growl of lust and flipped him over. He hovered above Vince, teasing, letting his breath fall on the sensitive places he’d found and wringing moans of frustration from the beautiful boy beneath him. When his tongue trailed over the bumps of Vince’s abs, the ticklish spot Mac found there caused him to squirm away. And when Mac’s lips engulfed his manhood, Vince lost the ability to form coherent thought.

Everything dissolved into a blur of touch and taste and pressure and pleasure and friction and feeling. 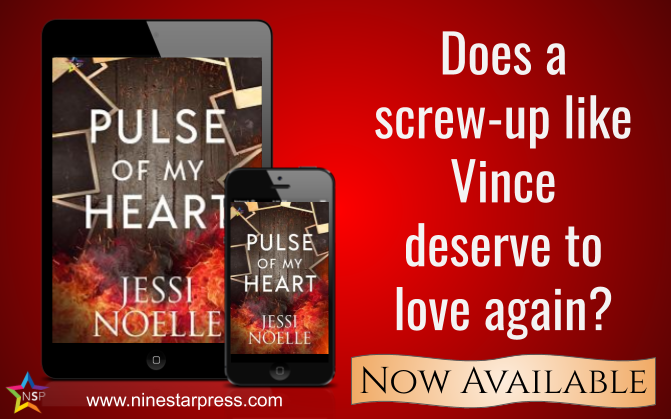 Jessi Noelle was born in South Mississippi, where she worked as a zookeeper and later as a firefighter. She is transgender with two sons, and currently lives in Nashville, TN.

Through the Inferno is her first novel. She is an alum of the inaugural #DVPit, a twitter event where marginalized authors pitch their books to agents. She is currently working on another book set in the The Inferno universe.