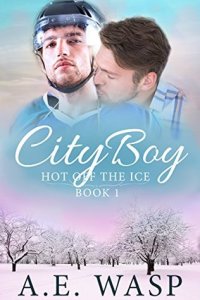 All Bryce Lowery knows how to do is play hockey. He’s been playing professionally since he was fifteen. Twenty years later, he’s rich, famous, tired, and alone. And possibly gay according to his ex-wife.

When a blown tire leads directly to mind-blowing sex with a motorcycle-riding white knight named Dakota, Bryce discovers he is most definitely gay. Now Bryce has a tough choice to make, follow the money to a new multimillion dollar contract, or follow his heart into the unknown?

All Dakota Ryan knows how to do is grow apples. Now at twenty-four, he faces losing both his home and his livelihood in one cruel twist of fate.

Then Bryce Lowery crashes into his life like the answer to all of Dakota’s prayers. He’s whispering promises to make all of Dakota’s wildest dreams come true. But Dakota knows better than to give his heart to someone who could leave, and if life has taught him anything, it’s that everyone leaves.

Dakota has a choice, sit back and wait for Bryce to decide his fate, or for the first time in his life, chose what he wants his future to be.

City Boy is a first time gay, fish out of water, May/December love story with a happy ending. It features snarky siblings, a dirty-talking farmer, lots of food, and big choices. (No poultry was harmed in the making of this book.)

Because I made a vow to go through STRW’s Hockey Romance list and read all the stories I missed and also because It’s now hockey season once more, I’ve started to read AE Wasp’s Hot Off the Ice series and I’ll tell you I’m loving it. City Boy (Hot Off the Ice #1) by A.E. Wasp is our introduction to the  boys of Thunder, the Seattle NHL Hockey team.  Actually, one of them who is in flux. That would be hockey all star Bryce Lowery, currently on the injured reserve list until he recuperates from his recent leg injury. But he’s fighting more than just a injury, and a  deceased relative, a will, and a road trip to Colorado might give him the change of direction he needs.

Dakota is a farmer, orchard farmer to be exact, one in danger of losing everything due to mislaid trust, naivete, and a crushing loss   .  And now he faces an uncertain future and nowhere to go.

This is one of those many trope story’s.  We have age gap, coming out, sexual discovery, as well as HEA.  And it all works because of Wasp’s wonderful charizations that allows us into the mindsets of each man as they make their journey towards each other and work their way through their individual issues.  City Boy is relatively low on angst, high on sweetness.  There are great dogs, wonderful sisters (on both sides), friends that appear, and, of course, teammates to gather round at Thanksgiving…all that start to form a “found family”.

Characters that form a foundation for the rest of the series.

This story is sweet, engaging, and really sets the stage for the rest of the series.  I love it and recommend it .

Cover art is perfect with the orchard at the bottom and Bryce at the top.  Love it.