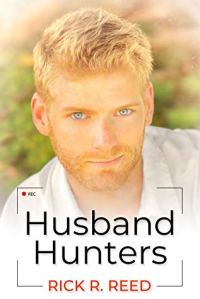 You never know where the love of your life might turn up.

When Matt Connelly suggests to his best buddy Cody Mook that they head to downtown Seattle to audition for the gay reality TV show, Husband Hunters, both agree the experience might be a lark and a chance to grab their fifteen minutes of fame. What they don’t know is that the show, modeled after HGTV’s House Hunters, will open doors of longing neither expected. For Matt, the secret love he has long harbored for Cody might be thrust into the spotlight. Cody might realize his search for his perfect-forever-man extends no farther than the man who’s always been at his side.

Husband Hunters promises laughter, tears, and, just maybe, a happy ever after. Will Cody and Matt’s story be one of best-friends-to-lovers—or an outright disaster?

When Matt convinces Cody to try out for Husband Hunters, it really is a recipe for disaster.

Matt and Cody have been friends forever and Matt has been in love with Cody for nearly that long.  It isn’t reciprocated, however.  Cody has definite categories where people belong and Matt is firmly entrenched in the best friend zone.  “To Cody’s way of thinking, there were rigid borders to relationships.”  But now they are committed to the show and “fake it til you make it”.

I liked the “reality” aspect because those reality shows are never reality!  They are scripted to within an inch of their lives and nothing is candid.  This was displayed here repeatedly, even to the point of having the guys in bed “pretending” afterglow.

When Matt is honest about his feelings it changes the dynamic between the two of them.  “Phones were rapidly put away or slips of paper tucked into jeans pockets.  Cody’s grin was always sheepish.”

This book is definitely not for everyone.  While the friends to lovers aspect is there, Cody and Matt don’t actually get together until nearly the end.  There is also sex with other people and a broken heart to deal with.  Cody didn’t really grow on me.  I thought his rigidity regarding people’s places in your life was too much.

Rick R. Reed is an author I truly enjoy and the writing here is stellar as always.  Dialogue never dipped into cheesy or unbelievable areas and the characters were well fleshed out.   It takes a long time to get where they want to be and sometimes during that I got irritated.

Cover art is simple, the face of a man looking forward.  I would have liked to have some of the reality TV aspect, a camera or such, included to make it more pertinent.