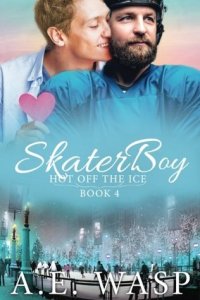 In a world that measures success in dollars, how do you put a price on happiness?

Love, marriage, and a baby carriage. It’s all Alex Staunton has ever wanted. Well, that and an Olympic medal for figure skating. The medal he got. The rest of it – not so much.

When his most recent poor decision comes to a door-slamming end, Alex moves into the house of his best friend, Thunder starting goalie, Sergei Pergov. But when tragedy strikes, giving Sergei custody of the twins he fathered confidentially, Alex’s problems take a backseat to the needs of two infants, and Alex vows to be the best fake-dad and house-husband he can be.

Sergei is dazzled by the way Alex makes managing all the craziness look as easy as doing a triple-axel. As their friendship grows even deeper, Sergei realizes he doesn’t want to imagine a life without Alex in it. Alex is the one who makes their house a home; his love makes them a family. How can Sergei make Alex understand he’s worth everything?

Skater Boy is a story about falling in love with your best friend. It contains discussions about baby poop, day drinking, girls’ night out, and the purchase of a mini-van.

Figure skaters and hockey players!  That is a match made in romance heaven!   And when the hockey player is a hot Russian goalie?  Well then that’s just the sparkles, rainbow diamond dust, and everything wonderful layered on top!  This is the couple of Skater Boy (Hot Off the Ice #3) by A.E. Wasp. Readers familiar with this series will have met both characters before in the previous stories (City Boy, Country Boy, Boy Toy) and remember some of the scenes recounted here, now told through the eyes of Alex Staunton, former Olympic medal figure skater, now a coach for several of the Thunder players.  Our other familiar face is Sergei Pergov, the Thunder’s all star goalie.  Pergov impact, story by story, is impressive as is the man.  Russian, with a personality as huge as his physique, I love this man so. And lately he was appearing with Alex by his side in the other stories.

I was dying to see their relationship start.  This is that story.

Of course, with a AE Wasp story, there are depths to both characters.  Alex Staunton’s past history, his fight to the Olympics, and his current status, all come with layers of pain, and concessions that have cost his soul and leaving his sense of self worth broken. Sergei Pergov has removed himself from Russia, his family, and the past there.   He lives alone in his huge house in the suburbs until he spies Alex and starts to want more.  Then gets much , much, more.

Wasp takes both men through the tentative stages of friendship, lust, discussions of personal revelations and self discovery, to declarations of love and a family.  It’s all done through great charactions, wonderful writing, and a plot I totally connected with.  I mean, a vulnerable figure skater, a hot Russian goalie, and twins!  It even has two adorable hairless cats Torvill and Dean, complete with sweaters.  This may end up being my favorite story of the series.  I haven’t finished reading them all yet, but I just love this couple.  What can I say?

Yes, I recommend this story and series, but read them all in the order they are written to get the most out of the relationship dynamics and the timeline for the characters.  I have them all listed below.

Cover art is lovely and in keeping with branding the series and characters.

Hot Off the Ice Series