She screwed up. She broke protocol. She saved a life. Grim Reaper Margo Petrov may have resurrected a drowned surfer on the brink of death, but she isn’t earning any awards or receiving employee of the month from Corporate; she’s under more scrutiny from the Grim governing body than ever before. Since she has a massive secret that could spell disaster if revealed, she sure as hell doesn’t want to be in the spotlight, in any form.

Margo vows to keep her head down and stay out of trouble, reaping her quota of spirits lest she cause more problems for herself and the woman she saved with an illegal blood bond. She certainly shouldn’t be opening doors to the Fae lands or offering her neck to an Empusa woman suffering from bloodlust, but Margo’s laundry list of bad decisions keeps growing. With the threat of becoming decommissioned by Corporate looming in her periphery, Margo stumbles deeper into the politics of her people and soon realizes their intentions are far worse than she initially thought.

“Margo, calm down. You can’t go killing someone just because they pissed you off.”

Margo Petrov pumped her arms, increasing her speed as she cut across the dead grass of the front lawn, though her initial fury had settled to a low broil. The cold metal of the baseball bat against her palm was soothing but not calming enough to ease the rage completely.

The sound of Luis’s sneakers pounding the asphalt behind her indicated he’d finally caught up. “I’m not going to kill them,” she grumbled.

Luis snorted. “Okay, well, when you storm out of your apartment, yelling, ‘I’m going to fucking kill ’em, Luis,’ I think I can safely assume you’re going to kill someone.”

She stopped abruptly, causing Luis to run into her chest as she turned to face him. “Fine,” she said, tossing the bat into the bushes lining the sidewalk. She grabbed his shoulders, lowering her gaze to his. “Nobody fucks with my brother without consequence. Nobody,” she said, shaking him slightly to emphasize her seriousness.

Headlights from a passing car gleamed in his wide brown-eyed gaze as he nodded.

“Besides”—she started, as she dropped her hands from him, quirking an eyebrow—“I just want to know if they’re afraid of the dark.” She’d been livid when Luis told her the resident group of asshats from their high school decided to give Luis hell on his way back from the library.

Without further discussion, Margo continued down the cracked sidewalks of downtown Philadelphia.

“They still hang out at the bowling alley on Daly Ave?”

Luis huffed a discontented sigh, eliciting a grin from Margo. “Dude come on. Think about this for a second; do you really want to risk another arrest? You’re almost eighteen, and you could be charged as an adult.”

He had a point, and she admitted that to herself, but she continued down the sidewalk anyway, cutting across the street, her feet displacing loose black asphalt pebbles on the worn roadway. “Yeah, but they need to leave you the hell alone. This is getting ridiculous.” For years, she and her brother experienced taunting for their otherness, Luis taking the brunt end most times. The basketball team tormented Luis for merely existing; however, Margo guessed they blamed their mocking on his differences. They needed a good scare, using a bit of magic, the otherness his tormentors weren’t aware of. She wanted to scare them so bad they’d piss themselves. If all else failed, she’d just beat the shit out of them.

Luis gave a shrug of nonchalance, something she instantly recognized as her brother’s passive language, which furthered the desire to teach the perpetrators a lesson. Instead of digging into his dismissal, she turned and continued her way toward downtown.

The streets were busy even though rush hour had ended a few hours prior. Cars zipped past, a stray honk resounding a few blocks away, voices rising in a cacophonous argument. The late-night city sounds were laden with a warning, hinting at the kind of night bad things happened, stirring a deep foreboding in the air around them.

Luis jabbed her in the ribs, ripping Margo from her eerie thoughts. “Hey, do you see that?” He pointed to LOVE Park on the opposite side of the crosswalk. Standing beside the water fountain was a child, their head turning from side to side in rapid succession. Luis was clearly pointing to the small person; however, the iridescent shift of air around the child indicated to Margo they weren’t alive.

Before meeting Luis, she agreed with the titles given to her—weirdo, crazy, psychic—the names condensing her down to a freak who could see ghosts with the only person to possibly believe her long dead. Of course, she’d been ecstatic to find kinship in another, to prove at least to herself she wasn’t crazy. That is until Luis stopped for every spirit in sight with their Sally-sob story. “Yeah, I see them, and no, we don’t have time.”

Luis scoffed just as the light turned, and he hurried across the street without waiting for Margo.

She rushed after him, forgoing her planned scare tactics on the basketball team in hopes she’d convince him to leave well enough alone.

They approached the park’s edge, Luis carefully watching the child. Luckily, the park held no other visitors, alive or dead. “We have to help her,” he whispered before he stuck his lower lip out.

She rolled her eyes. “They aren’t stray puppies, Luis. We can’t help every single one of them.”

Brows cinching, he met her gaze with an icy stare. “Maybe this is why we can see them, to help them move on.”

Though reluctant to admit it, she’d come to the very same conclusion herself a long time ago. With no way of knowing why they could guide ghostly apparitions to the other side, she couldn’t come up with a better reason herself. She glanced over at the redheaded girl and sighed. “Fine, but we need to be quick, and I still want to find those idiots so I can mess up their night.” 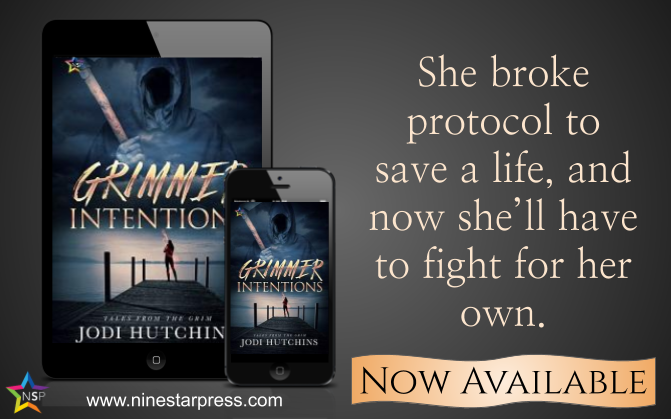 Jodi Hutchins is a healthcare professional by day and fanatical writer by night. They are also an avid reader, coffee connoisseur, helpless romantic, amateur artist, enthusiastic maker-upper of things, spouse, and parent. The frequent rain of western Washington doesn’t stop Jodi and their wife from gallivanting through the next trail head with their two children.