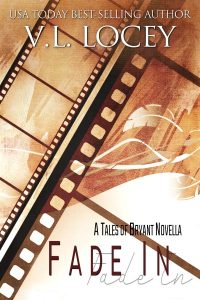 Will Devon and Caiden discover that their new love is a wrap after the filming ends?

Weddings, champagne, and slow dancing. It’s a lethal combination and one that has led film student Devon Maxwell into one awkward predicament. Brought in at the last minute to help his friends Isamu and Brian during their Bryant Park wedding, Devon was not prepared for Caiden Dell to sweep into his life. The spark of attraction between him and the hip film executive was instantaneous. That spark led them right into Caiden’s big bed for a night of pleasure that Devon will never be able to duplicate no matter how many takes life gives him.

To make things even more complicated, Caiden offers the recently vacated job of office intern to him. He’d be a fool to turn down an offer to work at Budgie in the Dell, the hottest LGBT film production company in the Big Apple. Looks as if Devon’s hopes of working in film are about to come true. He’s ready for days filled with tiring shoots, long hours, and irate actors. He just never dreamed his nights would overflow with passion, laughter, and whispers shared with a gorgeous, older lover.

V.L. Locey’s series,  Tales of Bryant,  is one of those that I wish could have concurrent stories running together.  The author has managed to create such a splendid group of complex, layered characters, each so different from each other, then based their lovers also in opposite “worlds” before bringing the two together, hooked by a delicious confectionary of a bakery near Bryant Park.

Two are poor film students, the others older, richer, although not always wiser in love.    Here I am missing the magical chemistry of Brian Gilles and Isamu Taylor who I followed through two stories (Tales of Bryant, Nine Small Sips).  Their relationship, past histories, and love were something I couldn’t get enough of, and only get glimpses of here.  Yes, I want more of them.

But Devon Maxwell and Caiden Dell are a lovely new couple to obsess over in Fade In, the next installment in Tales of Bryant.  Both characters are people we have met previously in Brian and Isamu’s stories and now we see them after that couple’s wedding.

Although Fade In is a novella, Locey makes it feel like a full length novel.  Her characters are well developed, their intense attraction and love for each other realistic and heartfelt. As was their pain and doubts.  I was with them every bit of their faltering way here and loved it.  As with the others, my only issue is the length because I wanted more at the end.

That romantic resolution needed more of a follow up for me, a better peek into their future.  Where Brian and Isamu got a second story, the next doesn’t belong to Devon and Caiden but another familiar character so I felt a bit let down.  I wanted a continuation here for them as well.

Perhaps that’s down the line.  I certainly hope so.

This is a wonderful series.  Layered, vivid, full of life, rich with location and characters.  One I highly recommend.