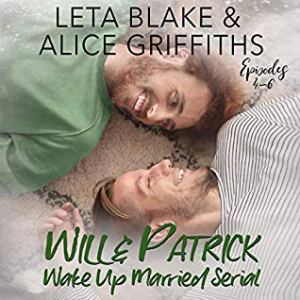 This absolutely wonderful and outstanding audiobook, featuring a superb vocal performance by John Solo, is a compilation of books four to six from the original Will and Patrick Wake Up Married series:

Four: Will & Patrick Fight Their Feelings

Five: Will & Patrick Meet the Mob

In my opinion, John Solo far surpasses his previous best performances with his portrayal of both Will and Patrick. Each voice is distinct and the emotion conveyed with the tone of their words is spot-on. From Will’s shuddering vocal sex scenes with Patrick as they replicate Will’s long-held fantasies, to Patrick’s extreme emotion when he reveals his deepest, darkest secret to Will, both characters show their love and emotional support for each other long before they declare the words.

Part two is somewhat introspective as Patrick can’t work due to a pending malpractice suit so he spends his time with his new friend Jenny and working out his feelings for Will. Patrick is one of those people who is off-the-chart intelligent, but feelings? Uh-uh, he has no experience with those. Jenny helps him realize he’s in love with Will and that Will loves him too.

In this part he also meets Will’s dad – at the point of a gun held to his head.  It’s just a joke – a sick one, no doubt, but Tony Molinaro is a mob boss, and Patrick takes the threat seriously.  He also thinks Will’s dad is seriously hot. In fact, he sees where his Puddin’ Pop gets his sex appeal.  I have to say that Patrick makes me laugh out loud with his bizarre sense of humor and snide off-the-cuff comments. And his pet word, Puddin’ Pop, is just perfect for Will and shows Patrick’s soft side, even in the midst of chaos.

Along the way in this saga, Will’s former partner, an emotionally abusive man, makes an appearance both in person and in memories. And, Will’s alcoholism is an underlying problem throughout the story, especially as Will constantly questions his decisions, and his sponsor gives him some advice that influences his relationship with Patrick. Then, when they learn they can get a divorce now that Will’s mob relatives have changed the “family” rules for divorce, Will looks at taking a break from Patrick as a way to examine his true feelings, but Patrick is devastated.  Though Patrick finally agrees, he installs a countdown clock on his phone so he can know, down to the second, exactly how long he has to wait before getting Will back.

Thankfully, Patrick is finally reinstated at the hospital, but the death of a patient sends him reeling and he heads out of state to visit his foster mother—the woman who always gives him unconditional love and support. There we see his family of the heart and learn more about Patrick’s early days.

There’s so much packed into this compilation. There’s hot, sexy, dirty talk, spanking, role play, and love. There’s so much love—family love, family-of-the-heart love, friend love, and finally, true love, a love for all time that comes full circle when Will and Patrick reunite.

I highly recommend this series, especially in this triple volume audiobook format because it gives the bigger picture and that picture paints my heart with happiness. There’s no way these two are going to be forgotten any time soon. Kudos to the authors for the story and most especially for their sense of humor, and double kudos to John Solo for bringing these characters to life.

Cover art is different from the eBooks.  I like this, soft, warm hearted and pulls you into the couple and story.