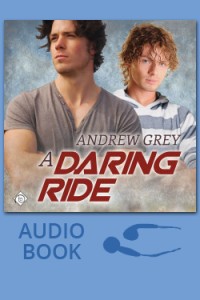 This review is of the audiobook version of this book, and as such, narrator John Solo deserves a shout-out at the beginning for bringing this sweet tale of a young bull rider to life.

In typical Andrew Grey fashion, this story is a sweet romance that focuses on Simon “the Frizz” Frizzell who wants to be a bull rider more than anything.  His ultra-conservative Christian parents, however, want to keep him under their wing.  They own and operate a string of Christian bookstores and have plans for Simon that include marrying the “right” girl and taking over management of one of the bookstores.

But Simon, who just snuck away for the weekend and garnered a top prize for seating his bull, is gay and he just knows that when his parents find out they are going to flip out and then kick him out.  As it happens, he’s not far wrong. In the meantime, Simon has written to Dante Rivers, the well-known bull rider, to ask if he can have a job at Dante’s ranch and apprentice with him so he can refine his riding skills.  Having met Dante and his partner, Ryan, and Ryan’s friend Jacky at the last event, he’s hopeful the man will remember him and agree.  It’s Ryan who actually contacts him and offers him a job and Dante reluctantly goes along with it. But it’s Jacky who seals the deal as he and Simon rekindle their spark of desire and go all the way toward making Simon’s dreams a reality—and not just the dreams of riding the bull.

As expected, the parents don’t understand, and as expected, there are plenty of misunderstandings.  To be honest, it was a bit cliché and I’m getting pretty tired of the nasty mother and/or father who beat the Bible into the ground trope.  This one relied heavily on those clichés so it wasn’t more than a three star read for me.  And as it was, it’s really only a three star due to John Solo’s narration. He did an outstanding job with all the voices—both male and female—and his storytelling was very easy to follow.

If you like a sweet romance, love cowboys, and don’t mind some Bible-banging, I can recommend this one.

Cover art by LC Chase features two young men, one muscular, in the upper panel and a bull in the ring in the lower panel. The cover is bright and colorful and aptly portrays the characters and theme of the story.