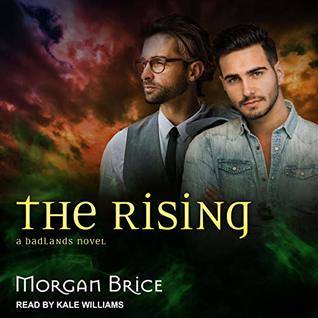 A big storm is brewing, there’s a killer on the loose, and the ghosts of Myrtle Beach are restless. Psychic medium Simon Kincaide and his sexy cop boyfriend, homicide detective Vic D’Amato, have their hands full helping the Grand Strand brace for rough surf, driving rain, and high winds as a winter storm roars toward shore.

Everyone’s on edge, and rumors are rampant about sightings of Blackcoat Benny, a ghostly omen of danger, and worse, the Gallows Nine, the spirits of nine infamous criminals hanged back in the 1700s, a harbinger of disaster. Rough tides wash the wreck of an old pirate ship into shallow waters, high winds threaten to damage an old mansion with a dark past, and the citizens of the beach town hunker down to ride out the storm.

As the skies grow dark and the sea turns wild, several men from prominent local families end up dead under suspicious circumstances. Simon’s premonition confirms Vic’s gut feeling – the killing is just getting started. As Simon tries to reach out to the spirits of the murdered men to help the investigation, he’s attacked by malicious ghosts that don’t want anyone getting in the way of their long-overdue vengeance.

When I first started listening to audiobooks, if you had asked me if I would be listening to stories I had already read, I would have said no..  But as my appreciation for this format and the gifted narrators has grown, I find I not only find myself listening to stories I have  already read bit actovey seek out the audio versions.  Why?  Because I have long since learned that a superb narration  not only sometimes elevates the story past my previous experience, maybe because of distractions or moods or what have you. But because that narrator’s voice and acting ability allows me to see into the characters and stories in ways I hadn’t seen before.

Love it when I am able to discover new facets to characters or pickup on new clues overlooks because I missed a sentence reading it.  Can’t do that while listening.

So it happens here with the marvelous audio version of The Rising (Badlands #2) by Morgan Brice as narrated by Kale Williams.  I’m more than thrilled with the seamless combination of author and narrator, the same one, Kale Williams who is the voice behind Morgan Brice’s other audio series.  I’m dropped into the still new relationship of Simon and  Vic as they settle in together into their lives in Myrtle Beach.  But there’s a huge storm brewing, and the atmosphere is heavy, as only that ominous way that foretells danger and foreboding.

Such an excellent story.  As with all such plots there is murder which bring’s in Vic, and the methodology and strange circumstances which brings in Simon, each in their area of expertise.  This is one of power, and haunting, and pirates.  And while I remembered it all so clearly.  Now, well, now, as voiced by Williams, this story sang of mystical powers and a need for revenge that even death couldn’t quench!  I couldn’t stop listening, hooked by story, hooked by voice.  it was as though it was new all over again.

I love how we start off pointed in all directions, yet all layers, the past, the present, and yes, even the future, come together when all the clues mesh with a crescendo to a chilling, thrilling, heart stopping ending! The Rising is truly one of my favorite stories with one of Brice’s favorite couples (and that’s saying a lot)!  It has it all.  Romance! Mystery! Suspense! The Mystical and Paranormal.  And even Pirates with revenge on the mind.  You can’t ask for more.  But you get it with Kale Williams as the outstanding narrator.  Don’t miss out on this superb series ! The audio version rocks!

Cover art is dark and the models work for the characters but I wish for a tad more elements from the storyline.

Cover Me: A Badlands Short 2.5 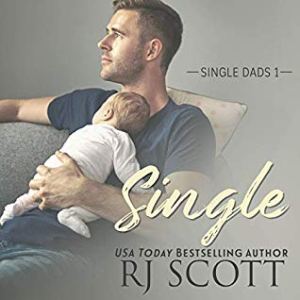 Reeling from the painful rejection of a man he thought he loved, Asher is left holding the baby.

Ash wants a family, and is determined to continue with a surrogacy he’d begun with his ex. Bringing baby Mia home, he vows that he will be the best father he can be. Nothing in this world matters more to him than caring for his daughter, not even accidentally falling in lust with the doctor next door. Challenged by his growing attraction to Sean, and confronted by painful memories of his family, Ash has to learn that love is all that matters.

When ER doctor Sean moves in with his friends next door to sexy single father Ash, he falls so quickly it takes his breath away. The sex they have is hot, but Ash is adamant his heart is too full with love for his daughter to let anyone else in. Why is Sean the only one who sees how scared Ash is, and how can he prove to his new lover that he desperately wants the three of them to become a family?

With the release of Single (Single Dads #1) by R.J. Scott and Sean Crisden (Narrator), one of my go to authors has delivered what will clearly be a new favorite comfort read and must have series.  This story just checks all my boxes.  It has great characters, a plot that immediately makes you empathetic towards this overwhelmed, yet loving dad, and a sweet slow slide into romance and HEA that will make you sigh and  even sniffle more than once, ok, several times.

The characterizations here are outstanding as is the dialog.  Ash is so identifiable as the young father juggling a job and a new baby.  Especially the emotional demands and fears every new parent faces when presented with the responsibility of a baby and all that represents.  Yes, wonderful, and yet,  can be a truckload of what ifs, especially when you are alone.  The author captures this so well, every damn aspect of it.

From the stress of a single dad to the household next door which has its own burdens of pressure and pain to deal with, the dynamics at  play here run from the humorous to the angst filled. It is just as easy to fall in love with all three men next door as it is Ash.  And from Sean to his other friends (who will get their own stories and romances), this quickly becomes a novel and series to treasure.

Sean Crisden does a incredible job of inhabiting each and every character, flowing easily from one to the next.  I sank into the story via his narration and never wanted t come out.  His voice has just the right tone for listening for me and it made this such a joy as an audio story.  He’s on my list of favorite narrators.

What can I say?  I absolutely adore this book in every way.  I am eagerly awaiting the audio version of the new story in the series and it will be in my top for the year.  Grab it up and see why I’m so excited!

Cover art: Meredith Russell.  Such a perfect cover.  Pertinent to the character and story, it’s also warm,  inviting and eye catching.  I love it.

In medieval England, duty is everything, personal honor is more valued than life itself, and homosexuality is not tolerated by the church or society.

Sir Christian Brandon was raised in a household where he was hated for his unusual beauty and for his parentage. Being smaller than his six brutish half-brothers, he learned to survive by using his wits and his gift for strategy, earning him the nickname the Crow.

Sir William Corbett, a large and fierce warrior known as the Lion, has pushed his unnatural desires down all his life. He’s determined to live up to his own ideal of a gallant knight. When he takes up a quest to rescue his sister from her abusive lord of a husband, he’s forced to enlist the help of Sir Christian. It’s a partnership that will test every strand of his moral fiber, and, eventually, his understanding of the meaning of duty, honor, and love.

Per Eli Easton herself,”this new edition of The Lion and the Crow from Dreamspinner has about 12K new words added, including new scenes and a new epilogue, plus it’s been fully re-edited.”  Having read the original novel when it first came out and loved it, I couldn’t wait to see what this new, revised version sounded like in an audiobook format.  What a unmitigated joy this audio turned out to be!

In The Lion and the Crow, Easton sinks her teeth into 1300’s England.  It’s a crude and cruel place, where brawn, privilege, and brutality  thrive  and all else struggle to survive.  Especially beauty in youth, no matter the gender. It’s a product and something to be used by others, and a weakness. It’s a mean, savage land of titles, and entrenched nobility and their rules.  The poor, the odd, those on the edge are bound to suffer and die.

It’s in this setting, that we have Sirs Christian Brandon and William Corbett.  One the youngest son and least regarded in his household because of his beauty, small size, and the fact that his mother was the second wife.  Sir William Corbett, who came looking for help for himself and his abused sister from Christian’s father, is the opposite.  Huge, a first son and heir, a lion in stature in every way. The characters the author has created in each man is perfect for the time, the personalities, the words and dialog the flows between them that reflects the society and the world around them.   Whether or not, you are a fan of historical fiction, you can’t help but be pulled into this story and their lives by her authentic descriptions and vivid  scenes.

The romance between Christian and William as it progresses from attraction to deep love on their journey from Christian’s castle to the land where Willian’s sister lives also feels historically accurate as it does believable.  William is filled with shame over his feelings towards Christian, how they come to work through the issues in their heads and hearts rings true in every way.  It’s sexy, scary, hard, and utterly romantic in a Medieval way.  Through the action, the  adventure of the journey to save Elaine from her abusive husband in an age where she’s considered his property, the dangers inherent in their weak numbers in an enemies land…it has all the elements of an harrowing and memorable tale.

I have to admit that epilogue had me choking back the tears and then finally just bawling like a baby.  Nothing like living a lifetime with these two men that you have come to love deeply and finding it has been  lived well and true.

And oh that narrator!  Such a richness in his voice, such gravel and depth that the English language and Eli Easton’s story just flows off his tongue with a sort of poetry.  Each character has a distinct personality/voice. Scott Richard Ehredt makes each man or woman someone we can believe in and relate to.  It’s the first time I have heard him narrator a story but now I will actively seek out more novels read by him because he’s just superb.  He took an already excellent story and elevated it further.

Cover Artist: Maria Fanning.  I love this cover.  It’s one of my all time favorites in tone and composition.  That’s truly the Lion on the cover.