Sequel to Pukawiss The Outcast
The Two-spirit Chronicles: Book Two 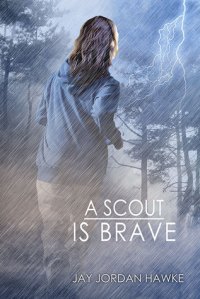 In the months following the brutal murder of Matthew Shepard, fourteen-year-old Joshua, a half Native American boy, is new to a Boy Scout troop and spending a week camping in northern Wisconsin. The weaker kids in the troop soon realize Joshua is not afraid to stand up to the troop’s ruthless bullies. Joshua’s bravery and kindness is infectious, and the bullied Scouts quickly find their own inner strength.

Joshua, however, is plagued by self-doubt as he realizes he has feelings for Cody, the son of the troop’s harsh and puritanical Scoutmaster. The two discover they have more in common than Scouting as they share their deepest secrets and develop a close friendship. That friendship faces its greatest challenge as the homophobic bullies claim a “faggot” has “infected” their troop. As if struggling to come to terms with his sexuality while dealing with hatred and bigotry isn’t enough, Joshua discovers the camp holds another dark mystery, one that will make him summon all his courage and learn for the first time what it truly means to be brave.

I really enjoyed this book and I would definitely recommend it to anyone looking for an interesting and fresh novel with plenty of action that still keeps the characters and their personalities as the main focus. It’s very realistic and I think a lot of LGBT youths will be able to relate to the things the characters are going through. Joshua, the main character, is incredibly likable, and I definitely read the book wanting to see him flourish. All of the characters are very realistic, down to the bullies who act very similar to a lot of real life teenagers, as well as Pastor Bob, the Scoutmaster and Cody’s father.

Cody is another character who is very likable. The main characters certainly aren’t perfect throughout the book, and that’s a lot of the appeal to me. I also really like the fact that the main character is half Native American and it’s well recognized within the story! Even as LGBT fiction, and more specifically young adult fiction, becomes more popular, we often see white, upper-middle class leads. Which is absolutely fine! But adding more diversity to a specific genre and treating the character’s heritage with respect, as this book does, is always a positive thing in my mind. There are LGBT teens of every race and culture, and seeing themselves represented from a young age is so important that it really just made me very happy to see that in the main character.

The story itself was really, really great. All in all, the action and mystery made it a fun read. There were times when the things the bullies in the book said made me uncomfortable, but I think they were designed for that purpose and I really commend the author on getting people to think about how they talk. The story of Joshua dealing with the camp bullies was very relateable and interesting, and added to him exploring the secrets of the camp and getting some mystery and action in there made this seem very multi-faceted and well thought out. It really kept my attention and I definitely enjoyed the read plot-wise, as well.

If there’s one thing about the book that I might criticize, it’s that there were times when the writing felt a little clunky. Not enough to bring me out of the story or really take away from me enjoying the book, but there were a few sentences here and there that could have been a little smoother.

That being said, I definitely enjoyed the book and it was a really great read on a lot of different levels.

Cover Artist: Anne Cain. Anne Cain is one of my absolute favorite cover artists and I love this cover a lot! It’s pretty, it represents the book well, and it isn’t too busy. It definitely would have drawn my eye in a store, and I really like the design.

*The 2014 Timmy Award for the Most Realistic Characters Portrayed in a Story (2014), Lambda Literary Award Finalist for Best Young Adult Fiction