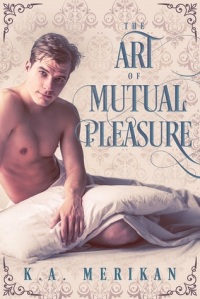 — The path to debauchery is strewn with good intentions. —

Benjamin Snowley is trapped in a most distressing predicament. He’s been feeling poorly and after having recently recovered from influenza, he knows that the fault for his declining health lies in a vice he wouldn’t dare mention in polite conversation.

For Benjamin, it all started back at school, where he first encountered the immoral Frederick Cory. Ever since then, the man has been plaguing Benjamin’s dreams and causing most unnatural urges.

Now is the time for all the infatuation nonsense to stop. With the help of an unorthodox doctor and an indecent proposition to a young stablehand, Benjamin will rid himself of the vile addiction.

But can the experimental treatment be enough to make him forget his feelings for Frederick?

Warning: Contains a clueless young man on a futile quest for chastity and a libertine artist eager to rid him of that goal.

This was an interesting story.  While regency style stories can be hit or miss with me I was happy with the ending to this story, I will admit that it took a bit of endurance for me to get through the first part of the book but the last third makes up for all the things that made it hard for the story to keep my attention.  Benjamin is quite disturbed by his self-pollution and seeks out even the most radical of help as he sees so other way to cure himself.  To make it worse he finds that the doctor is a fraud and even worse that he enjoys the “treatments”.  Frederick has always been intrigued by Benjamin but took his icy and prudish exterior as a sign to back off, which he does until he sees Benjamin at a brothel in all his glory and can’t stop thinking of him as his.

The beginning of this story is a bit heart breaking with Benjamin pretty much torturing himself in fear that what he is doing is bad and will end up hurting him.  We could just see how much this hurt Benjamin’s confidence and self worth as he fully thought it was slowly killing him and that he would only get worse.  When we first see Frederick I wasn’t impressed, but he really redeems himself when he finally gets thru to Benjamin and shows him what love and pleasure can feel like.

Throughout most of the story we see it through Benjamin’s eyes, so we know how he is feeling even when he tries to deny it to himself as much as all those around him.  He continues to worry even while getting his “treatments” even if he begins to feel better.  There is hope for Benjamin when we see how much Frederick wants him to feel and experience on the positive spectrum together.  While they are open in their relationship they are fully committed to each other and they both have to be comfortable with what is going on.  The abundance of self doubt made it hard to get into the story, but the end with Benjamin and Frederick’s relationship and life made up for all that in the end.

The cover art by Natasha Snow is a wonderful sensual view of Benjamin.