A short post from Garrett Leight about the challenges/joys of writing a character and story that includes mental illness and making it not only convincing but relatable.

For me, writing a book that documented Ash’s mental illness was a challenge I didn’t truly understand until after I’d done it. Ash’s story isn’t my own, but many of his quirks and nuances are mine, and I didn’t realize how cathartic writing that shit down would be until long after the series was complete.

It was odd, actually, because there was obviously Pete to consider too—how he viewed Ash’s strange habits, how he felt about them, and his way of rationalizing them from an outsider’s POV—and I found after a while that having Pete reason his way around Ash was actually rather healing. When you struggle with depression and anxiety, it’s often hard to find reason in anything, but seeing it through Pete’s eyes really helped. Pete loves Ash with all his heart, and creating the bond between them, and strengthening it with every chapter, even when the world was stacked against them…yeah, I guess that was where I found my joy.

And sticking with Pete, when it came to Rare and we suddenly see him struggling too, for me, that was a real wake-up call, because Pete is such an outwardly steady character, a rock for so many others, I suppose it helped me, and readers who’ve contacted me since, see that depression truly is the curse of the strong.

Rainbow Award winner Garrett Leigh is a British writer and book designer, currently working for Dreamspinner Press, Loose Id, Riptide Publishing, and Black Jazz Press. Her protagonists will always always be tortured, crippled, broken, and deeply flawed. Throw in a tale of enduring true love, some stubbly facial hair, and a bunch of tattoos, and you’ve got yourself a Garrett special.

When not writing, Garrett can generally be found procrastinating on Twitter, cooking up a storm, or sitting on her behind doing as little as possible. That, and dreaming up new ways to torture her characters. Garrett believes in happy endings; she just likes to make her boys work for it.

Where to Find the Author: 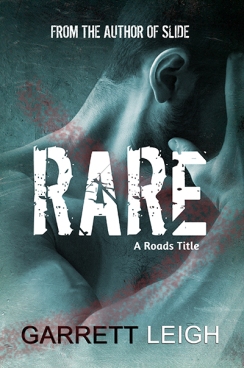 Paramedic Pete Adams lived through the year from hell watching his lover, Ash, fall apart, and the precarious balance between work and home is becoming more strained. His heart is always home, with Ash, but the dark side to his job is weighing him down.

Tattoo artist Ash Fagin is recovering from a nervous breakdown triggered by revelations about his traumatic childhood. His battle with mental illness is far from over, but with Pete by his side, he’s feeling good again, so good he doesn’t notice something missing until it walks right into his living room.

Ash believes he’s had enough coincidence in his life, but when a voice from the past comes looking for him, it takes the devastating injuries of the one he loves most to convince him to let a ghost become the family he never knew he wanted.

PETE HAD been busy while I’d been gone. I stood in front of the shiny new door to his apartment and wondered for a moment if I’d come home to the right place. Then I remembered the coarse message he’d sent me a few days ago, telling me in no uncertain terms what a bitch the new door had been to fit. A separate message—perhaps an afterthought—told me he’d left a key on top of the frame.

I reached for it and turned it over in my hand. It was silver and shiny. The old one was battered brass, bruised and familiar. It felt heavy in my pocket as I slid the new key into the lock. I considered the fate of the old key now that the door it belonged to was no longer there. Pete said I pondered the strangest things.

The new door swung open with a whisper. It felt odd after two years with a door that crunched like a gearbox. The new door was like a ghost, all shimmery and silent. I wasn’t sure I liked it.

A wry grin crept over my face. Really? Four days without Pete and you’re worried about a door? I took a tentative step forward. The door closed with a quiet click, and this time, I paid it no heed.

I glanced around the apartment. It was quiet and still. No TV, stereo, or signs of life. That was no surprise. I was a few hours early. Despite hating every moment of the flight between Chicago and Philadelphia, I’d caught an earlier plane home. Pete wasn’t expecting me, but I could feel in my bones that he was home. The invisible cord between us pulled me along, and a minute later, I found him passed out in our bed. He was asleep on his stomach, something he only did when he was alone or too tired to notice. It used to make me uneasy—sometimes it still did—but not today. Today his bare back was exactly what I needed to see. I sat down by his head and brushed my fingers over his stubbly jaw. He didn’t stir, even when I leaned down and breathed in the clean smell of his skin.

Because Two Men Are Better Than One

Contest: Enter to win a Rafflecopter Prize: An audiobook of ‘Rare’. Must be 18 years of age or older to enter.

Do you listen to books?  Need a new book to listen to?  Check out Silvia Violet’s Finding Release, the first in her new Wild R Farm series.  As a part of Silvia Violet’s audio book release tour, you have a chance to win an audio copy for yourself.  To enter to win, visit this Rafflecopter link .  To listen to an excerpt, visit Amazon and click on play Sample.

Coleman Wilder is a half-breed werewolf. Some days the tension between his human side and his werewolf instincts threaten to tear him apart. But the challenge of running a horse farm as a gay man in a conservative Tennessee town keeps him focused until he meets horse shifter, Jonah Marks.
Jonah’s family insists that shifting is sinful, but Jonah longs to let his stallion run free. Desperate to escape his family’s judgment, he asks Cole, his secret crush, for a job. Cole turns him down, scared his desire for Jonah will make him lose control. When Jonah’s brother threatens his life, Cole struggles to save him and give them both a second chance at the life they’ve always wanted.

Excerpt: Hear this read at Amazon (http://www.amazon.com/Finding-Release-Wild-Farm-Book/dp/B00KHZB99O) by clicking on Play Sample.

“You were Demon.” Cole said, finally able to speak.

Cole couldn’t verbalize his racing thoughts. He was shaking, sick at the thought of what Jonah had suffered, stunned, thankful. His knees threatened to give, and he grabbed the stall door to keep himself upright.

Jonah trembled. “My brother… he locked me in horse form. I forgot who I was. Forgot how… how to be h-human.”

Rage, fear, and a fierce need to protect had Cole ready to rip Nathan Marks apart.

Cole wanted to pull Jonah into his arms and take his fear away, but he was afraid to move. “Tell me what happened.” 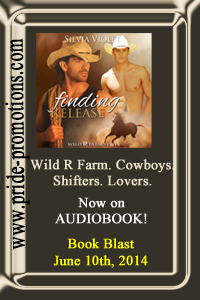 Silvia Violet writes erotic romance in a variety of genres including paranormal, contemporary, sci fi, and historical. She can be found haunting coffee shops looking for the darkest, strongest cup of coffee she can find. Once equipped with the needed fuel, she can happily sit for hours pounding away at her laptop. Silvia typically leaves home disguised as a suburban stay-at-home-mom, and other coffee shop patrons tend to ask her hilarious questions like “Do you write children’s books?” She loves watching the looks on their faces when they learn what she’s actually up to. When not writing, Silvia enjoys baking sinfully delicious treats, exploring new styles of cooking, and reading to her incorrigible offspring.
Author Links:  Facebook     Twitter      Tumblr