Holden loves his twin sister, tattoos, wild hair colors, and love. The first three are easy — his sister loves him, he’s training as a tattoo artist, and hair dye is a store away. But love is another matter. Scoring an evening of fun takes no effort, but getting someone to stay? Impossible.

Then a hot werewolf cop shows up for a tattoo appointment, and Holden’s interest seems mutual. But just as things seem to be going well, his sister collapses at a club and Holden’s world falls apart.

Contains the follow-up story, Paw Prints on My Skin: Werewolf Zack is a tattoo artist at an exclusive tattoo parlour designed to cater to the needs of shapeshifters. He works with lots of interesting people, but no one quite takes his interest like new customer Tobias. Tobias is many things: a playful Labrador, a tattoo virgin and a wildlife photographer. He’s all these things, but will he also be Zack’s? There is an instant spark between the two men that heats up quickly and could maybe, just maybe, lead to something more.

This was a nice story but I’m not sure the writing was for me.  I felt there were lots of little explanations thrown into the story that could have been left out and just got annoying.

Holden and Dawn are pretty much attached at the hip and have a wonderful connection with each other.  When him and Seth meet they both desire more and are slowly taking their relationship but when Dawn is hurt they work together to find out what happened.  I liked the idea of this story but didn’t really feel any connections to these characters.

The cover art by Written Ink Designs works well for the story. 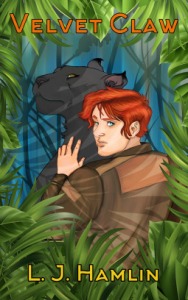 Researching and finding cures for illnesses is what Dr. Evan Kidd does best. When he’s asked to help determine what’s making the children of Felis Forest sick, he can’t say no. Evan accepts, and even understands, why Rene has to follow him around town. It’s not every day a human is allowed in the “cat people only” town. But being attracted to someone who doesn’t trust him, much less like him, brings back painful reminders of his past.

Rene has plenty of his own baggage and having to shadow a human—who happens to be a doctor—isn’t helping. Evan challenges all Rene’s preconceived notions about humans and about himself. If they can survive all the obstacles while uncovering the truth, they might just discover they aren’t so different after all.

Velvet Claw by L.J. Hamlin was a  new supernatural thriller for me by a new author and I thought it had a lot going for it.   First off was the premise, a human doctor brought in to find the cure for a mystery disease afflicting the children of a Felidae race.  Combine that with a interspecies romance and mystery and I’m there.

However the execution and actual exposition stopped short of 4 stars.  The world building for example, Hamlin give us a prologue in the human/ Felis history but it doesn’t explain why with all the strengths, superior might etc. it doesn’t turn out that the Felis come out on top instead of the humans.  More was definitely needed there. Just didn’t make sense to go from God to the persecuted and hunted.

I liked the characters here, from Evan to Rene and several of the other people of the cast.  However the author cant seem to decide if the story is told third person, first person or what point of view is to be used.  I can see her wanting to have all the viewpoints out there but the flows just gets disrupted instead of being able to carry the story in a more even natural way.

Finally, when the mystery is solved, the motive is never revealed, a flaw here that bothers me.   It may not bother others, but it certainly did me.  It felt that the story lacked closure, especially since the author then threw in an entirely different mystery altogether that felt unnecessary.

So much promise here and that’s why I gave it 3 stars, not because of the actual execution.

Cover art is simplistic.  Not a fan.

Jed Chance is the lead singer of Black Lace, a very successful rock band. It’s gone through a few lineup changes: first, Jed was outed by a former bandmate, and now they’re looking for another new member. That’s when Donnie comes to audition.

Donnie is ten years younger than Jed, and he’s beautiful, with a complicated past. He instantly gets a crush on Jed, but is afraid to act on it. Still, Jed and Donnie can’t keep away from each other. But getting together isn’t their only problem: Jed has attracted a dangerous stalker, who means to do Jed serious harm.

Reading about yourself on the Internet might be a bad idea — masochistic even — but during the audition break, Jed has the urge to see the latest gossip. He’s found an article that starts with a recap of Black Lace’s history; his history.

Lead singer of Black Lace, Jed Chance, shocked the world when he confirmed that he is, in fact, gay. Rumors started when ex-Black Lace member Bert Goode sold his story about his affair with the married man.

Jed winces, because it hadn’t been that simple, and because Bert’s betrayal still hurts, even though it’s been nine years. Jed skips over the speculation of why he’d played it straight, marrying Jamie Pierce, his now ex-wife and manager.

At the time, it seemed like the scandal would be the end of Black Lace, but two years after they went on “hiatus” the band was back with a new guitarist, and a new attitude. Mrs. Cherry Lee was a welcome addition to the band, and a breath of fresh air. The once great rock band was back again, delivering some memorable music.

But now Cherry Lee has retired from the band to spend more time with her family, having given birth to three children during her seven years in the band. Cherry Lee and the rest of her bandmates all claim to be parting on good terms. But what this reporter wants to know is what will happen to Black Lace now that Cherry Lee is gone.

The band’s record company claims this isn’t the end of Black Lace; there will be another tour soon and even a new album. Who will step into Cherry Lee’s shoes? And will it be the same? Better? Worse? Watch this space. 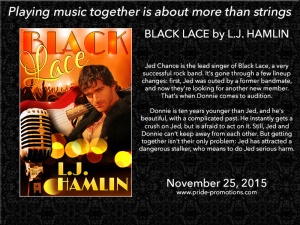 L.J. Hamlin is a twenty-something (getting older every day) author, who has been writing all her life, mainly in notebooks no one else ever saw. Then she discovered M/M groups online and was encouraged by friends to share her stories. After a while (and with a lot of pushing) she grew brave enough to attempt getting published. Now she shares her stories with others and hopes never to stop. L.J. loves cats and pretty much all animals, is a collector of many things, often weird, but most of all books.

Enter to win a Rafflecopter Prize: E-copy of ‘Black Lace’ by L.J. Hamlin.  Must be 18 years of age or older to enter. Link and prizes provided by the author and Pride Promotions. 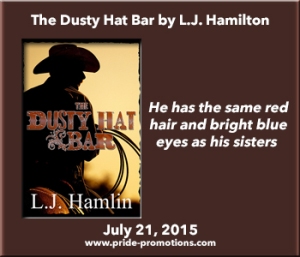 About The Dusty Hat…

Noah Kimberly walks into his usual bar, same as he does most Friday nights. It’s surprisingly busy for this time of night, even for a Friday.

Tonight things are different. Tonight Noah will meet Lennie Boyce, the son of Earl Boyce the biggest ranch owner in the area and Noah’s ex boss. His friend and bar owner Dusty might warn him away from the other man, but Noah’s just not sure he can resist this cowboy.

Dusty is behind the bar, and Noah signals him for a beer, trying to shake off his thoughts about the Boyce family. He hasn’t been keeping track of them since he got fired. He sees them around, sure. It’s not that big of a town, and he hears the odd thing. But he hadn’t heard much about Earl’s youngest, Lennie, other than that he was his father’s pride and joy. If Noah was a violent man, he’d punch Lennie in the face just to see what his Daddy would do, but he’s not a violent man and prefers to avoid using his fists unless he has to.

“That’s quite a frown you’ve got going,” Dusty says as he passes him a cold bottle of beer.

“When did Boyce’s boy turn twenty-one?” Noah asks, ignoring the comment about his frown.

“Just today. That’s why him and all his friends are here. Mainly college kids, but if they’re drinking, I’m not complaining.” Dusty shrugs.

My name is L.J. Hamlin. I’m twenty-four and writing has been a passion of mine my entire life. I have a deep love of M/M fiction and at the moment that is the only genre I write in. You can check out another short of mine, Nurse Levi, in the Men in Uniform anthology.

Enter to win a Rafflecopter Prize: E-copy of ‘The Dusty Hat Bar’.  Must be 18 years of age or older to enter.  Link and prizes provided by the author and Pride Promotions.
Rafflecopter Code:
a Rafflecopter giveaway