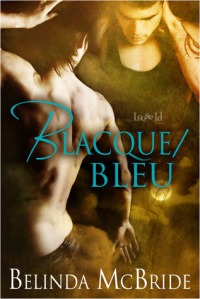 Lukas Blacque is a werewolf in a unique position.  A son of the alpha wolf, he prefers life lived on the fringes of the pack, removed from pack politics.  He has a college degree but prefers his car shop, bringing old vehicles back to life as well as performing normal maintenance.  Another surprising element is that he is lonely for a shifter with a pack, but he has a secret.  Lukas Blacque is gay and deeply in the closet and so for that his lifestyle works as long as no one looks too closely.  There is one person who has caught his interest but the  danger factor is too high for him to act on it, and that would be his neighboring vampire in the shop next to his.  But he refuses to act until one night when his father decides to change everything and Lukas’ life is upturned.

Oliver Bleu is a vampire plagued by nightmares from his time on the front in WWI, nightmares which keep him from sleeping and replenishing his strength.  Now he finds himself slowly fading away, even his hunts don’t quench his hunger.  But then there is his neighbor next door to Oliver’s shop.  Oliver knows he is more than attracted to the shifter, Lukas’ blood might be able to bring him back to strength.  The walls between their businesses are thin and he hears the family arguments going on next door when Lukas’ father arrives for a meeting with his son.  When Oliver goes to check on Lukas, their encounter turns into a passionate weekend neither can forget nor wants too as lust turns into love.

But Lukas has made a commitment to his father and his pack, and is determined to honor it even if it breaks his heart and Oliver’s as well.  Lucky for both shifter and vampire, they live in a very special town who  looks after her citizens,  And when evil from Oliver’s past follows him to Arcada, things are set in motion that will have lasting impact on all around, including Lukas and Oliver.

I just loved this book.  It is the first book by Belinda McBride and it puts her on my must have list immediately.  From the start she gives her characters a marvelous world in which to inhabit, the town of Arcada.  The town is sentient and although we don’t know how that happened, her affection for the diverse citizenry reveals itself in a myriad of ways.  Perhaps she makes it impossible for them to leave or her protection manifests itself in prodding others to act in ways that benefits others.  No matter, Arcada is a benign and loving presence and this leaves us just dying to know more about the town and its diverse community of  humans, vampires, shifters, fae and so many others that we are given brief glimpses of.

But the heart of the story is McBride’s characters, Lukas Blacque and Oliver Bleu, a terrific play on words that fits in beautifully in their interactions with each other.  Lukas Blacque is a complex giant of a man, gentle of spirit, lonely and sad because as much as he wants to be a part of his pack due to his wolf nature, the fact that he is gay keeps him separated and aloof.  He is such a lovely creation that we connect to him immediately and we can empathize with him at this point  in his life.  Then we meet Oliver Bleu, in many ways the anthesis of the vampires we have meet in other novels.  Far from the powerful, immortal beings we have come to expect, Oliver Bleu is a victim, struggling to survive.  In a horrific element of the story, we learn that Oliver died from mustard gas in the trenches at the front.  If you were not familiar with the horrors of WWI before, by the time you learn how Oliver was affected, the true evil that man can create in the name of war will be brought home in gritty, pus filled painful authenticity.  Sometimes the horror of the paranormal universe has nothing on the real one we already live in.

Circling around these main characters are others of equal strength and complexity.  From Dane Blacque, the Alpha wolf to Lukas’ sister and Oliver’s great grand daughter (yes, you read that right), McBridge gives us one compelling persona after another to capture our interest and move her narrative forward.  Even her villains have a startling depth to them that enables you to feel some compassion for them even as you hate their actions, past, present and fear what they are going to do in the future.

This is the first in the Arcada series and really after one memorable walk through town with Lukas and Oliver, you can see she has the basis for many books to come in the fascinating town dwellers and their identities as revealed in bits and pieces.  My only quibble is that I felt it ended too soon.  That’s what happens when all the right elements come together in a story that will stay with you after you are finished reading it.  Blacque/Blue is just that story.  Now I am on to the next with great anticipation.  I will let you know what I find.  But pick this one up and start reading.  You are going to love it!

Books in the series in the order they were written and should be  read:

Cover art is just gorgeous and perfect for the story within.