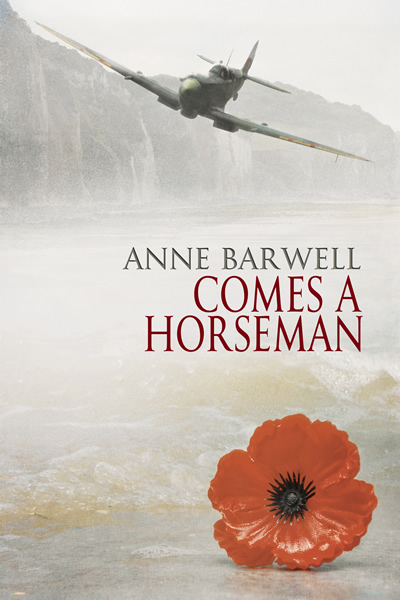 Available for Purchase at DSP Publications

Scattered Thoughts and Rogue Words is happy to have Anne Barwell here today talking about the writing the series finale, and her latest release Comes a Horseman (Echoes Rising #3).  Welcome, Anne!

Thanks for hosting me today as part of my blog tour for Comes a Horseman, the 3rd and final book in my WWII Echoes Rising series from DSP Publications.

I have a Rafflecopter running as part of the tour so be sure to enter.  DSP Publications also have the ebooks for Shadowboxing (book 1), and Winter Duet (book 2) on sale from 17th July-August 4th.

Although I started writing this series with a clear overall story in mind, part of me still can’t believe I’ve finished the final book.  I first began writing the early draft of Shadowboxing in 2002, but shelved it when the thought of all the research got a little daunting.  After my first novel with Dreamspinner Press, Cat’s Quill, was published in 2011, I dusted off the manuscript for Shadowboxing and started writing again. This time the research felt more doable, and hoping I might have a home for it, I went back to the beginning, edited it heavily, and finished the story.  I was delighted when Dreamspinner wanted to publish it, and ecstatic when it and Winter Duet, book 2 of my renamed Echoes Rising series, were republished by DSP Publications in 2016.

Although this story wasn’t my first published book or series, it was the first thing I’d written that I knew was going to be a novel.  That novel quickly became a three book series, when I realised the story I wanted to tell either needed to be split into a series, or would be one very long book.

I’ve grown attached to these characters, as they’ve been a part of my life for nearly twenty years, and although I’m happy I’ve finally finished telling their story, I’m going to miss them. Despite writing in series, Echoes Rising is the first I’ve finished—although I’m working on completing my others in progress too.  The characters—much like myself—have changed and grown over those years, to the point where I had to rethink some of the scenes in this last story.  They might have worked at the beginning of the series, but these men are no longer the same as they were when they started on this adventure.  They’ve endured many hardships, lost people they cared about, but through it all they’ve built friendships which have impacted their lives. I figure that’s quite an achievement considering that—apart from Matt and Ken—none of them knew each other before the pieces moved into place leading into their mission into German in 1943.

I suspect—considering the strong personalities of these men—that although Echoes Rising is finished, that they’ll find another way to sneak into my writing.  I’m gearing up to set up an author newsletter and will be writing free fiction as a part of that, and Liang is making noises about sneaking into a 1950s murder mystery I want to write.  Matt already has a blink and you’ll miss it cameo in an upcoming release, so watch this space.

After all, these guys are spies, and very practised at getting into places they’re not to be.  I’ll miss the 1940s and WWII as well. I’ve learnt a lot more than I ever thought I would, so maybe other characters from that period still have stories they want to share. Only time will tell.

Finally, I want to thank the readers who have enjoyed reading about my characters’ exploits in WWII. I’ve loved being able to share this series with you.

Sometimes the most desperate struggles take place far from the battlefield, and what happens in secret can change the course of history.

Victory is close at hand, but freedom remains frustratingly just beyond the grasp of German physicist Dr. Kristopher Lehrer, Resistance fighter Michel, and the remaining members of the team sent by the Allies—Captain Matt Bryant, Sergeant Ken Lowe, and Dr. Zhou Liang—as they fight to keep the atomic plans from the Nazis. The team reaches France and connects with members of Michel’s French Resistance cell in Normandy. Allied troops are poised to liberate France, and rescue is supposedly at hand. However, Kristopher is no longer sure the information he carries in his memory is safe with either side.

When Standartenführer Holm and his men finally catch up with their prey, the team is left with few options as they fight to keep atomic plans from the Nazis. With a traitor in their midst, who can they trust? Kristopher realizes he must become something he is not in order to save the man he loves. Death is biding his time, and sacrifices must be made for any of them to have the futures they want.

Matt nodded, his lips moving although he did not speak. He was counting, Michel realized, as they pulled away from shore, and using the rhythm of his movement to distract himself from the darkness.

The moon’s light highlighted the waves lapping around the boat—the water seemed to reach toward them before diving back again. Ken and Matt quickly settled into a unified motion, both focused on what they were doing, although Ken glanced at Matt a couple of times.

Frej signaled for Matt and Ken to change direction slightly and rest the oars. They did that for a few moments, letting the boat drift with the current. If Michel squinted, he could see the outline of the bridge in the distance and several shapes moving at either end of it. The guards on duty would hopefully stay focused on the bridge itself and not notice a small rowboat sneaking over the border. The area was well guarded, but as it had been secured for quite some time, they would not be expecting trouble.

On the other side of the boat, Liang quickly turned and leaned over the side. As soon as he started to make a gagging noise he shoved his hand over his mouth to silence it. If his seasickness got any worse, it would be difficult to mask the noise of him vomiting over the side of the boat. He was doing his best to silence his dry heaving, but his hunched posture suggested he felt miserable and unwell.

Frej leaned toward Ken and gestured. Ken nodded, rested the oars again, and then he and Matt changed direction. Matt was still counting under his breath, and he gripped the oar tightly.

“Who’s there?” The shouted question shattered the silence.

Kristopher glanced around, an expression of panic on his face.

Michel put a hand on his arm to calm him but didn’t dare whisper the reassurance he wanted to. He turned around and strained his eyes, trying to find the source of the disruption. Matt and Ken stopped rowing, the boat drifting back the way they’d come, caught by the current.

He heard boots against wood in the distance—the unmistakable sound of men running, probably over the bridge crossing the Rhine south of their position. “No farther or I’ll shoot,” one of them yelled.

Frej got down on the floor of the boat. Michel and Kristopher followed, then Liang. Matt kept hold of his oar, trying to keep it as still as he could. He leaned down into a crouch, as did Ken.

Gunfire sounded from the bridge. A couple of shots in succession before stopping. Michel heard an engine, a vehicle approaching. A door slammed, and then everything went quiet again. Logically he knew the bridge was a good few kilometers away, but Frej was right about noise carrying on the water. If felt too close for comfort.

Frej waited a few minutes. “Row,” he whispered urgently. “While they are distracted.”

You can find the list of sites taking part in the blog tour here: https://annebarwell.wordpress.com/2017/07/23/comes-a-horseman-blog-tour

August 1 – Two Men Are Better Than One 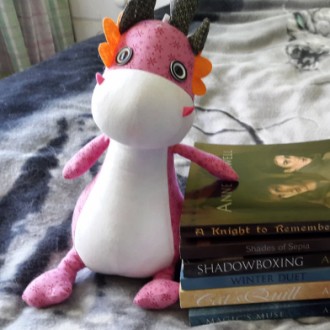 Anne Barwell lives in Wellington, New Zealand.  She shares her home with two cats who are convinced that the house is run to suit them; this is an ongoing “discussion,” and to date it appears as though the cats may be winning.

In 2008 she completed her conjoint BA in English Literature and Music/Bachelor of Teaching. She has worked as a music teacher, a primary school teacher, and now works in a library. She is a member of the Upper Hutt Science Fiction Club and plays violin for Hutt Valley Orchestra.

She is an avid reader across a wide range of genres and a watcher of far too many TV series and movies, although it can be argued that there is no such thing as “too many.” These, of course, are best enjoyed with a decent cup of tea and further the continuing argument that the concept of “spare time” is really just a myth. She also hosts other authors, reviews for the GLBTQ Historical Site “Our Story” and Top2Bottom Reviews, and writes monthly blog posts for Authors Speak and Love Bytes.

Anne’s books have received honorable mentions four times and reached the finals three times in the Rainbow Awards.  She has also been nominated twice in the Goodreads M/M Romance Reader’s Choice Awards—once for Best Fantasy and once for Best Historical.