Sometimes falling in love is the most dangerous thing of all…

Blue’s a thief who lives for adrenaline and danger. When he meets Mick, a mercenary and a hitter, he feels an immediate attraction. But Mick reneges on a bet they’ve made, leaving Blue pissed and confused.

When they meet again a year later, Blue’s in terrible danger after having walked into the middle of one of Mick’s jobs. Mick saves him, and although the two men have fallen for one another, they have no idea how to handle that kind of intimacy that’s been forced on them.

But when Mick goes missing on a job, Blue’s the one to go after him, determined to save the man he loves no matter the cost.

I very rarely do re-reads and there’s a reason for that.  This book reminded me of why.   I find that over time my tastes change and things I really liked before often don’t hold the same appeal years later.  This series used to be one of my favorites though so I thought there was a good chance it would hold up.  It wasn’t a fail per se but I also wasn’t wow’d.
The two men have met in the past and now again a year later when Blue finds himself in the middle of one of Mick’s jobs.  The story is fast paced as is the love story.  It was very insta-love which was probably my biggest peeve with the story.  That didn’t used to bother me but has become a plot device I don’t care for anymore.  Also, the story is filled with sex scenes.  Too many for the length of the book in my opinion.  I felt like the story relied on their chemistry in bed more so that building an actual relationship between them.
This story was narrated by Dorian Bane.  I thought he did a good job on both MC’s.  I had never listened to a book by this narrator so it was a pleasant surprise.  I’m always looking for new narrators that I enjoy and I will be adding this one to my list.
Cover:  This book’s cover was done by CrocoDesigns.  I like the cover and think it looks really good.  It’s a really eye catching design.
Sales Links:  Riptide Publishing | Audible, Amazon, iTunes
Audiobook Details:
Kindle Edition, 134 pages
Published March 8th 2014 by Riptide Publishing (first published December 5th 2012)
Original TitleFree Falling
ASINB00IWAI7OQ
SeriesExtreme Escapes, Ltd. settingBogotá (Bogota) (Colombia)

Scattered Thoughts and Rogue Words is happy to have SE Jakes here today to talk about her outstanding new release Dirty Deeds, the first in the new Dirty Deeds series.

Hey everyone!!! Thanks to Scattered Thoughts and Rogue Words for having me back here for my Dirty Deeds blog tour 🙂 Dirty Deeds is the first in this spin-off series of Hell or High Water. Dirty Deeds focuses on Cillian and Mal, two characters who’ve been in both Hell or High Water books 1 & 2 (Catch a Ghost and Long Time Gone.) Dirty Deeds # 1 captures a very specific moment in time for the Cillian (the spook) and Mal (the former SEAL in exile).

STRW: 1.  What was the first story you wrote?

STRW 2.  What was the subject matter?

SEJ:   Bound by Honor is the first in my Men of Honor series. It’s the story of Tanner, an Army Ranger (who is training for Delta Force). His dying teammate made Tanner promise to go visit his Dom a year after his death. Damon, Jesse’s Dom, doesn’t want anything to do with that, but he decides to honor Jessie’s wish.

STRW 3. I love stories where the mc are undercover.  What made you decide to pair a Navy Seal with a British Black Ops?

SEJ  :They honestly paired themselves. It surprised the hell out of me. They showed up separately in the Hell or High Water series and halfway through writing Long Time Gone, out of nowhere I realized they were going to be together.

STRW 4. Which of the two characters was hardest to write?

SEJ: Probably Cillian, at least at first, because he didn’t really reveal himself to me right away. Definitely a mysterious spook. I found out things I didn’t know about him writing Dirty Deeds, and I think readers will be pretty surprised too. He’s definitely been a polarizing force in the books.

STRW 5. How many books do you have planned for the Hell or High Water series?

Thanks, SE, for stopping by.  Dirty Deeds is part of the Extreme Escapes universe.  All the connected stories from Hell or High Water can be found here.  Dirty Deeds is one of ScatteredThoughtsandRogueWords Highly Recommended Books/Must Reads of 2014. 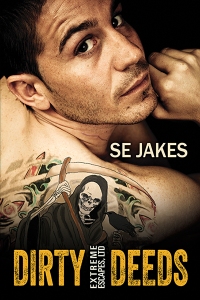 Dirty Deeds: Dirty Deeds book 1:
Two seasoned operatives finally meet their match: each other.
Cillian works for the mysterious Special Branch 20: an organization that runs black ops commissioned by the British government. His specialty is deep undercover assignments with virtually no support. He’s been alone for so long that he no longer knows anything else.

Mal’s also used to being alone. Wanted in several states and even more countries, he’s not allowed in the vicinity of any of his former Navy SEAL teammates. And his current assignment is to track Cillian in order to discover the spook’s endgame. Except he’s no longer sure which one of them is getting played.

Cillian isn’t about to let the mission that’s consumed him for the past several years crumble because an outsider is poking around where he doesn’t belong. But Mal forces his way through Cillian’s defenses—and into his heart—exposing a devastating betrayal that could destroy them both.
*

This title is part of the Extreme Escapes, Ltd. universe.

Contest Rules and Other Stuff You Need To Know:

To enter the contest, visit http://www.rafflecopter.com/rafl/display/a31df32/