Detective Bill Quigley first met Isaac, the mastiff familiar, the night Isaac was rescued from the witch who kidnapped and tormented him to force his magic for illegal uses.  He’s head over heels for the quiet young man who works for MWP (Metropolitan Witch Police) but Isaac doesn’t seem to return his regard. In fact, Isaac seems quiet and withdrawn most of the time; definitely not someone who’d appreciate Bill’s advances. So when Sionn, the owl familiar who works with Isaac, asks Bill out, he accepts and it seems to be with Isaac’s blessing.

But Isaac does indeed like Bill—he just feels inadequate and worries that his magic is tarnished after what happened. Plus, the witch Isaac’s familiar is attracted to doesn’t want him, and Isaac knows Bill only has a little magic and likely wouldn’t be interested in someone with damaged magic like his.

There’s plenty of time for a slow-burn attraction in this story, and that’s what happens. Just when it seems Bill might settle for Sionn in an effort to forget Isaac, an attempt is made on their lives and Isaac and Bill are thrown together in painful circumstances.  They can’t deny their attraction after that and that day begins a slow return of Isaac’s confidence and starts their journey to a lasting relationship.  Along the way there’s plenty of adventure and a dastardly scheme involving kidnapping children and experimenting with hexes to tailor the form the adult familiar takes so that the wealthy witches can have what they want.  Add to that, a surprise in the form of Bill’s half brother and the story has so much to offer that readers, like me, will get lost in the pleasure of this author’s highly creative and imaginative mysteries.

I am looking forward to much more in this wonderful hex world and most definitely I’m hoping Sionn gets his own book.  That little owl has a lot to offer!  I highly recommend this story and this series to readers of paranormal and mystery MM romance.

The cover by Jordan L. Hawk is done in a style similar to others in the series: above the title a profile of a man matching the description of MC Bill Quigley and below the title is the shadow of a mastiff, which represents MC familiar, Isaac, and it’s set against the background of an old street map of New York City.  Very creative and attractive.

A wild, wild, wonderful short story in the Hexmaker series, this one features Rafael, a hawk shifter, who is also a wanted criminal. He’s somewhat of a Robin Hood among the poor in the Southwest and when Hexas Ranger, Enoch Bright catches up to him, he also stumbles upon the location of the Bone Gang, a group of robbers and murderers that are much worse than Rafael can ever be.

They decide to team up to pursue the gang and will do this by creating a partial bond. Yes, Rafael is witch Enoch’s familiar, but neither of them really want to bond permanently. By creating the partial bond, they can work together without getting too involved. Or so they think…

This is a wonderful addition to the series, bringing a whole new dimension to the world of the Hexmakers. Instead of only having access to the witches and familiars in New York, we now have the Hexas Rangers (I LOVE this name!) who cover the Southwest, and I sincerely hope we will see more of them in the near future. I wouldn’t mind more of Rafael and Enoch either, since we didn’t really have the time for their attraction and their story to fully develop within this short.

I highly recommend this series to all lovers of any form of paranormal adventure, but if you have a soft spot for cowboys, this one is for you. Plus, it’s a good place to jump in if you haven’t read other books in the series. It can easily be read as a standalone since there’s no mention of the previous books or characters.

Cover art by Jordan L. Hawk is in the same style as others in this series and features both MCs in the top panel—the dark-skinned Hexas Ranger and the Hawk flying in the background. The middle panel features the title and the lower panel depicts a desert sunset. It’s very attractive, gives information about the story, and ties to the theme of the series—all the things that give it appeal and let readers know this is something to read. 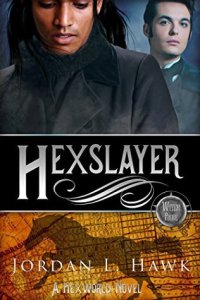 As exceptional as others in this series, Hexslayer is the tale of Nick, a horse familiar who has no love lost for any witch and snubs his nose at the MWP—Ministry of Witch Police—even though one of the familiars who found his witch and works there is his brother, Rook (The 13th Hex).

For years, Nick has housed feral familiars in the tenement apartments above his bar, Caballus.  He’s made it his personal business to assist any and all familiars who do not want to be tied down to a witch and has even been operating an underground escape route for those who need to get out of the city.  No one knows of that except his employee Kyle, however.  He’d certainly never let on to Rook, who is now a “goody two shoes” in Nick’s book.

But when Nick meets Jamie MacDougal, MWP witch and former war hero, something clicks and he’s shocked to realize he may be looking at his own witch.  Refusing to believe it, and definitely not willing to act on it, he’s surprised to find that Jamie came back from the war with an artificial leg and that Jamie is not typical of any witch he’s ever met before.  In fact, the man is so sexy and so sweet that Nick decides to propose that he and Jamie form a temporary bond, to be separated by a hexbreaker after one month.  They will work together to solve the mystery of who is killing feral familiars in a ritualistic way and leaving the bodies surrounded by blood and symbols for all to see.

There’s mystery and intrigue, action and adventure, fighting and loving, and very definitely a happily ever after in store for these two men who seemed to be mismatched from the start, but in reality, they form the other half of each other’s soul.

I highly recommend this story, and in fact this entire series, to lovers of mystery and romance.  If you love the author’s Whyborne & Griffin series, you are sure to love this one too.  This can be read as a standalone; however, there are repeating characters from previous books so reading the first ones in the series is recommended.   In any event, don’t hesitate to pick this story up.

Cover art by Jordan L. Hawk features two men in the upper frame of the cover, the smaller one representing Jamie in the background, the larger, darker-skinned man in the forefront representing Nick, Jamie’s familiar and horse shifter.  The lower frame shows the shadow of a horse superimposed on a Hexworld map and linking this cover to others in the series.  Though somewhat dark, it is very attention-getting and perfectly portrays the theme of the story. 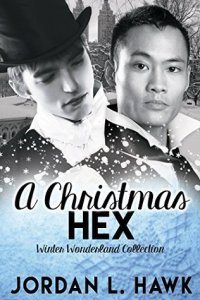 Jordan Hawk’s series continues with a holiday short sure to please as much as a hand-crafted piece of chocolate. It’s just delightful!

Roland is a wolf shifter and a familiar who is also a mystery writer.  He’s happy his writing career is a success because he knew he’d be on his own with no partner for the rest of his life. After all, no one wants a wolf familiar. He learned that the hard way, when after the first time he shifted, his parents kicked him out in fear of their lives. On his own since those early years, he has no desire to seek a mate.  And yet, at a small restaurant one night, he meets a waiter whom he easily recognizes as his witch.

Augustus (Gus) Cao, is really only posing as a waiter when he spots the cute guy in the restaurant. Gus is actually undercover, trying to find out more about a scheme involving a hex that captivates the viewer’s attention. When he follows his targets out of the restaurant late one night and ends up trapped in an alley, he’s shocked when Roland shows up to rescue him.

Though the story is short, the author managed to develop their characters, give them a background, build a relationship, throw in an adventure and some angst, and at last, give Roland the happiness he deserves with the handsome investigator.

Highly recommend to all, especially those already hooked on this series.

The cover by Alli Smith features black-and-white headshots of both MCs with a lower border of sky blue.

Malachi is a fox shifter who finds himself in a world of trouble when the robbery he’s committing turns into a murder.  He’s not the murderer, just the thief who happens to get caught when he stops to check on the bleeding man he finds in the library. Unfortunately, he found the real thief in the act—a red-headed thief who gets away, leaving red-headed Malachi to take the heat for the crime.

Just down the street, leaving his parent’s mansion on “Millionaire Row,” is Owen Yates, the forensic hexmaker we met in Hexbreaker.  Owen spots the police vehicle outside the nearby mansion and goes to investigate. By the end of the story, readers will realize this is the best thing that ever happened to him, as he not only finds the pieces of the valuable object the thief was after—an object with ancient Greek hex symbols on it, he also finds the man who is his familiar—Malachi.

As Malachi and Owen start out slowly, while all around them, outside forces are trying to decide Mal’s fate and the real murderer is now trying to murder Mal, the story gets interesting and complex. Owen is in his last week with the MWP, Metropolitan Witch Police, because he’s getting married Thanksgiving weekend, a marriage he neither desires, nor appreciates. He’s marrying to appease his wealthy family who want to shore up their place in society with funds from the wealthy heiress he’s betrothed to.

However, as the week progresses, leaving the MWP and getting married sound more like a death sentence as he and Mal, now bonded as a witch and familiar, dread facing the future and the loss of the chance of a happy outcome they both desire and deserve.

I really enjoy this story. This author has such a vivid imagination and appreciation of the history of the 19th to 20th turn of the century period. Weaving historical facts and fantasy into a complex story, while bringing alive another “fated-partners” love story, one with a few D/s elements this time, is pure creative genius. As the saying goes, the joy is in the journey, and in this case, Owen’s and Mal’s journey to love and to finding their true places in life brings nothing but joy to readers. I highly recommend this to all lovers of MM romance.

Cover art by the author is perfect for the story and characters.  Its eye catching and draws you in.