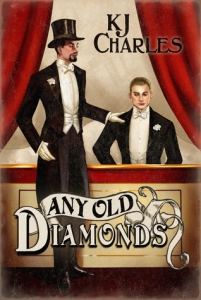 KJ Charles is an incredibly talented author and when dealing with a UK historical, her work is top of the line.

Lord Alexander Pyne-ffoulkes is the younger son of the Duke of Ilvar. He, his older brother who is set to inherit the title, and his sister have been estranged from the duke for ten years. Their other sister, who has since passed away, witnessed the duke murdering their mother so he could marry the caretaker’s widow—a miserable, miserly, poor excuse for a stepmother if ever there was one. Alec, his sister, and his brother’s family live in poverty while the duke and duchess flaunt their wealth. As the 20th anniversary of their marriage approaches, Alec determines he’s going to do something to bring the two down.

So he begins the first steps to his long game and hires the Lilywhite Boys, a notorious pair of jewel thieves. Jerry Crozier is suave, debonair, charming, a total rogue, and before Alec knows it, Jerry discovers his secret and dominates him into a series of submissions to Jerry’s desires. Alec’s plan is to get Jerry, and his partner who will be disguised as Jerry’s valet, into the house party the duke is planning as their anniversary celebration. There, Jerry will break into the duchess’s safe and steal away with her set of diamonds commissioned for the anniversary event. But along the way, Alec has to ingratiate himself to his father with a public apology and distance himself from his siblings who want nothing to do with the duke and to whom he can’t reveal his plan.

Needless to say, Alec falls in love with Jerry and Jerry, surprisingly (to himself) falls in love with Alec. The dynamic between the two is outstanding. I really wanted to hate Jerry for manipulating Alec and for holding himself aloof. As it turns out, his own heart was engaged and directed many of his actions.

I also love the author’s sense of humor, which is woven throughout the story in both subtle and not-so-subtle ways. For example, Jerry is teaching Alec how to play billiards in a semi-public location when he tells Alec to put his “nose to the ball,” and the pair totally lose their composure, laughing hysterically—along with this reader.

Tender moments are equally as well done. “The question was never whether I loved you,” Alec whispered. “It was, How brave am I or maybe, How afraid am I? And it turns out I’m slightly braver than I am afraid when it comes to you…” Gah! I loved this romance.

There were also brief visits from, and mentions of, characters we met in the past, including those in the Sins of the Cities series, though this story takes place about twenty years after An Unsuitable Heir.

And the ending wasn’t at all what I was expecting. KJ Charles is a pro at plot twists and yet always manages to find a way for her gentlemen (and rogues) to find their way to their HEA. I very highly recommend this one as a fine example of her work.

The drawn caricature cover by Vic Grey features two gentlemen of the late 19th century at an opera house—one seated and one standing, both in formalwear. Not only is it symbolic of their first adventure together, the fact that it’s not a photo cover may be a play on Lord Alexander’s talent as an artist.