So on top of Hurricane Sandy, the nor’Easter hit the very same areas with another punch.  So I am putting out there once more the name of organizations providing assistance to those in need due to Hurricane Sandy.  Please help if you are able, even the smallest of amounts add up to someone being able to eat or have warm clothes.

Humane Society of the United States

Now turning to books, I have some wonderful books for you this week, including the latest from Andrea Speed, Megan Derr, and Marguerite Labbe.  In particular, I wanted to talk about books labeled bittersweet.  I think most people see that tag and run as fast as possible in the opposite direction and miss out on some marvelous books.  Two in particular come to mind.  One is Rodney Ross’ The Cool Park of His Pillow.  This is absolutely one of my top books for 2012.  It does contains sadness and pain as it charts one man’s recovery from the death of his long term partner. But there is also so much joy, humor and love that it would be shameful to label it bittersweet as it is so much more than that limiting tag.  I feel the same way about Ghost in the Wind, the latest from Marguerite Labbe.  This story has a definite supernatural bent to it as it concerns the death of a man’s long term partner but in this case the man is murdered and his ghost returns to help his partner move on as well as solve a mystery.  Here the grief is palpable, the murder shocking and the suspense agonizing.  Dreamspinner Press calls it a Bittersweet Dream. Sigh.  I can almost hear the rejections on the wind.  Again, definitely not so.  Don’t miss this wonderful book either.  It’s painful, joyous, suspenseful, and full of boundless love.  I have the latest in the Infected series (darn you, Andrea Speed!!!) and a book from KA Mitchell that is not receiving the attention I think it is due.   So fasten your seatbelts and prepare for a wild ride of a week:

So that’s the week unless something changes.  Happy reading! 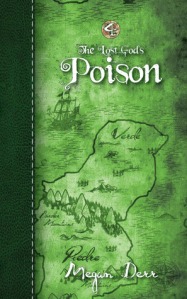 “Nine gods ruled the world until the ultimate betrayal resulted in their destruction. Now, the world is dying and only by restoring the Lost Gods can it be saved.”

It has been two years since Ailill, the White Panther of Verde returned home from Pozhar with the jewels needed for the ceremony of The Tragedy of the Oak.  He had been poisoned on his mission there and it had taken all the skill of Gael, the mortal avatar of the Unicorn, to heal him.  Verde has been ruled by the mortal avatars of their Lost Gods, the Unicorn, the Pegasus, and The Fairy Queen killed 900 years ago at the base of the Sacred Oak.  Every 100 years, the moment comes to right the wrong but is lost and the Tragedy repeats itself. Now all of Verde waits as the time for The Tragedy of Oak grows near once more. All of Verde hope that finally, after 900 years, the ceremony will finally be completed and their human incarnations of The Unicorn, The Pegasus, and The Fairy Queen become gods again.  But someone doesn’t want that to happen and the White Beasts of Verde are being poisoned, the people of Verde are becoming crazed as their White Beasts fall, and even their three God incarnations themselves are threatened.

Gael asks Ailill to investigate the poisonings and stop the person responsible before it is too late and the Tragedy starts all over again. As the people start viciously fighting each other, Vanya arrives from Pozhar.  Once a mercenary, now a noble, he has never forgotten Ailill and has come to see if their feelings for each other are the same after a two year absence.  Ailill too has been missing his mercenary and hates the lifestyle that comes with being a White Beast of Verde.   Ailill and Vanya’s  investigation leads to old secrets kept from the White Beasts by the reincarnations themselves.  Old lies and treachery must be revealed if they are to stop The Tragedy of the Oaks from happening again.

Poison is the fourth and penultimate book in the Lost Gods series that began with Treasure.  As this incredible journey through all manner of Kingdoms and their Gods draws to a close, more of Megan Derr’s complex saga comes together as another large piece of the final puzzle is put in place.  Like one of those fabulous wooden puzzle boxes, each book puts more elements in place to solve the complete puzzle using elements and characters from each of the previous stories.

In Poison, one of my favorite characters, Ailill the White Beast of Verde becomes a central piece of the puzzle to the Tragedy of the Oak and the key necessary to open the door on the mystery of the deaths of Verde’s Gods. Previously a deliciously slutty being when we first meet him in Treasure, Ailill has evolved through all the stories, his character deepening, his gravitas, the seriousness of his mission, becoming evident even through the frivolous manner he exhibits. In Burning Bright, Iilill meets Vanya, the wolf of Pohzar, who along with his gang of mercenaries, helps Ailill recover Verde’s royal jewels.  In a short amount of time, both men strike up an affair of lust that quickly becomes something more than either ever expected to have, an affair of the heart.   Towards the end of the story, Ailill is struck down by a sorcerer of Schatten, poisoned by dark magic.  Helpless to heal him, Vanya must watch as Ailill sails for Verde and the hope for a cure from The Unicorn, Pegasus, and The Fairy Queen. Now events bring the two men back together again as the Lost Gods are returning.  This time it is the Kingdom of Verde’s Lost Gods time to be reborn and again a war is fought between Order and Chaos.  Vanya, a character I came to care about as much as Iilill, too has grown and developed since we last saw him.  All the skills he has acquired as the head of a band of mercenaries are now being employed as a Duke of the Kingdom of Pozhar to his and ours amusement.  I had hoped to see these two reunited and Derr does not disappoint here with the reclamation of their romance, their feelings for each other burning as brightly as before.  Whether Derr meant to or not, these two become the heart of the story for me and their love affair more important to me than the Gods restoration. I suspect that is part of the quibble I had with this book.

Many more characters become front and center here.  One is Noir, the Royal Voice of the Gods.  A young black panther whose deep love for Gael, the Unicorn is doomed to failure if Gael continues to keep their love secret, hidden from all at Court even from the other avatars.  Noir is endearing in his innocence and youth, a perfect foil for Gael, the mortal reincarnation of The Unicorn. Gael and his sisters, The Fairy Queen and Pegasus, rule Verde from an incestuous relationship that is taking its tole on its members.  We also meet all the other White Beasts that comprise the Court of Verde and are quickly swamped with character sketches and lightly layered beings.  After a while it was hard to keep track of cast.  Gael is perhaps the most fully realized of all of them which is not surprising as his relationship with Noir is on the same level of importance as Ailill and Vanya’s. As Noir watches the interaction and  outright displays of affection between Ailill and Vanya, the inequality of his own relationship with Gael is emphasized and Noir’s insecurities deepen.  Megan Derr does a great job with making all these relationships and their flaws seem realistic to the reader as the characters juggle their expectations with the reality of their situations as the City falls into flames as the White Beasts are poisoned.

I always keep in mind as I read each related story of the Lost Gods saga that even the smallest detail is of significance in the construction of the whole picture.  So I was dismayed that I realized who was behind the poisonings almost from the start.  It was the only person who made sense, as Vanya discovers later on in their investigation.  I also came to the right conclusion as to the methods used to conceal their identity from all the others.  That was unlike any of the other puzzles presented in the other books so I was a little stymied that I figured it out so soon.  The only thing I can come up with is that timing is everything and that it all had to happen exactly during the ceremony of The Tragedy of the Oak and Derr had planned on that character reveal early on to ramp up the anxiety and anticipation of the race to the end.  And perhaps the final piece will fall into place during Chaos, the last in the series.  It is not like her to give away plot points so easily unless she means to do it.  So color me a little confused here.  That’s my main quibble.

Don’t get me wrong, this is still an incredible book. The richness of her descriptions, the vivid portraits of the inner sanctum and gardens, the sheer grand scale of mythology building that is the Lost Gods is astounding. Was I happy and totally satisfied at the end?  Absolutely, just with some quibbles this time.  Again, the themes of sacrifice, reincarnation and forgiveness are played out but not exactly as they were before. Not all are forgiven, not all are sacrificed as the Gods return to Verde.  I suspect Derr is completing her stage upon which all the characters from all the books, along with new ones will converge in the final battle between Order and Chaos.   I cannot wait for it to start and the saga come to its convoluted end.  The Lost Gods saga is a real Treasure as I suspected from the start! Bring on the Chaos!

Cover:  Another perfect cover from London Burdon to go along with the rest of the Lost Gods saga.