Hi, I’m Lou Hoffmann, author of The Sun Child Chronicles. I love writing these stories, because they take my imaginings and run with them. One of the very best parts of the fantasy worlds Lucky (the main character) inhabits is the variety of animals he encounters. I’ve always loved horses, seriously. At fourteen, as a city girl growing up in Los Angeles County, I used to walk over an hour on Saturday to get to a riding stable so I could spend the lunch money I’d saved all week on a ride. Sometimes I’d muck stalls so I could ride longer. 😊 So I’m happy that the world Lucky lives in most of the time is a world where horses are the major mode of transportation. By the way, these aren’t listed in order of most loved. I’m really terrible at choosing favorites of anything at all. I just love them all. 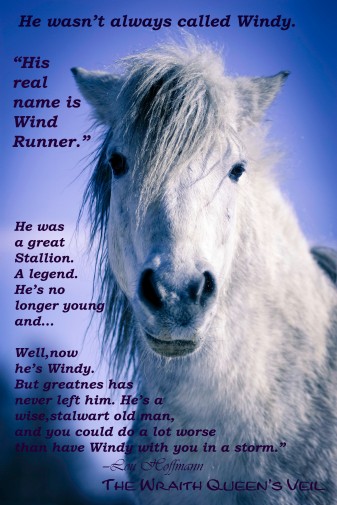 Thanks for joining me! Don’t forget to enter the Rafflecopter giveaway, and good luck with the drawing! I hope to see you along the way as I celebrate this release! See the schedule in this blog post: http://queerlyya.rainbow-gate.com/dragons-rise-release-schedule-of-events-blog-tour-giveaway-facebook-party-book-signings/

Five days after his sixteenth birthday, Lucky—or Luccan, as he’s known in the Sunlands of Ethra—cut down a horde of wraiths with the help of his magical, living blade, Ciarrah. Then they ended the worst undead of all—Lucky’s mother, Liliana, or rather the evil creature she had become. Now he needs a chance to rest, but he can’t catch a break. The otherworld invaders want to take Ethra as their new home, and one defeat hasn’t even slowed them down.

Ancient wizard Thurlock continues to help Lucky learn about his unique magic as they travel together, but when they reach the capital city, they find few allies and too many Sunlandian traitors. They’re forced to flee, but their discouraged spirits lift when they’re joined on the road by an old wizard friend of Thurlock’s and some new young allies. Lucky has armies, friends, family, shifters, dragons, a faithful dog, a winged horse, and magical tools on his side. But when war comes like a great storm, hurling at him everything from zombies to hateful wizards to twisted drakes, can he hope to prevail—or even survive?

An hour, Lucky thought. Two days ago I fought in a battle with aliens and dead people and… ended my mother’s nightmare. Yesterday I went to a meeting where I found out people still hate me. Today I had a bit of not-fishing with Han, a game of Skippers with Cook, and a game of Skies with Aunt Rose, and now I have one hour before I have to leave. My boyfriend’s gone home, one of my best friends is missing, my other best friend is on a mission, and my dog isn’t even here.

Lemon Martinez apparently had taken pity on him for once, though. He purred comfortingly—and uncharacteristically—curled into a loose spiral of gray fluff next to Lucky on a sun-washed flat rock in a quiet corner of the Behlvale. Not far away, a worker was singing a rhythmic song, maybe keeping time with the movements of rake or hoe in the Sisterhold’s kitchen garden. Much closer, a pair of hand-sized golden dragonflies flashed in and out of the sunlight, their wings making a droning hum over the splash and bubble of the creek.

“Springborn.” Lucky had just that day learned the name of the creek, and now he announced it to Lemon, who didn’t seem to care.

The whole scene could, Lucky supposed, be called idyllic, a word he’d also recently learned. Be that as it may, he wasn’t in the mood for peace and country sunshine. He didn’t want to leave the Sisterhold. Not yet. He had questions he wanted answers to, and he felt pretty darn sure that at best he’d come back from Nedhra City with more questions instead. At worst… he didn’t want to think about it.

Fidgeting, he drew the Black Blade from its sheath, which was hooked to his belt at the moment, and squinted at the violet gleam echoing the sunlight deep inside the obsidian. It brought to mind another afternoon in the sun, and he realized one of his questions could be answered then and there.

“Ciarrah.” Lucky mentally called the blade’s name and waited no more than a second for her response.

“Remember when we were playing… um, I mean practicing sword stuff?”

“I’m a rock, Blade-keeper. Memories are embedded in me.”

There was no way to know for sure if Ciarrah was doing the equivalent of an eye-roll, but somehow Lucky thought she might be. He smiled at the idea before communicating, mostly just being stubborn, “Well? Is it?”

When Ciarrah answered, her “voice” had a lilt that might have been laughter. “Yes, young Light-wielder, I remember all that has happened to me and all that I have been told or shown over these last thousands of years, beginning with the day I first met our great ancestress Naht’kah.”

“Naht’kah, the dragon? The one I read about in that book? Isn’t that just a… story?”

“Oh, but there is no such thing, Luccan, as ‘just’ a story! In stories lie the greatest truth. Sometimes it’s hidden in fictions, but sometimes at the core of a legend is the true account of what has come to pass. Naht’kah is quite real.”

“She lives. You may meet her one day.”

Why that idea should freak him out, Lucky wasn’t sure. So many crazy impossible things had happened in the last year, what was one more? Still…. He began his usual comforting chant out loud. “Normal, normal, nor—” He stopped and shook his head, then gave himself an order. “Never mind! Nothing is normal. I mean everything is normal. I mean whether it’s normal or not, it is what it is, and no use pretending different.

Lou Hoffmann, a mother and grandmother now, has carried on her love affair with books for more than half a century, and she hasn’t even made a dent in the list of books she’d love to read—partly because the list keeps growing. She reads factual things—books about physics and history and fractal chaos, but when she wants truth, she looks for it in quality fiction. She loves all sorts of wonderful things: music and silence, laughter and tears, youth and age, sunshine and storms, forests and fields, flora and fauna, rivers and seas. Even good movies and popcorn! Those things help her breathe, and everyone she knows helps her write. (Special mention goes to (1) George the Lady Cat and (2) readers.) Proud to be a bisexual, biracial woman (of European and Native American descent), Lou considers every person a treasure not to be taken for granted. In her life, she’s seen the world’s willingness to embrace differences change, change back, and change again in dozens of ways, but she has great hope for the world the youth of today will create. She writes for readers who find themselves anywhere on the spectrums of age, sexuality, and gender, aiming to create characters that live not only in their stories, but always in your imagination and your heart.

Visit her on her blog: http://www.queerlyya.rainbow-gate.com