A sweet baker with spicy taste… 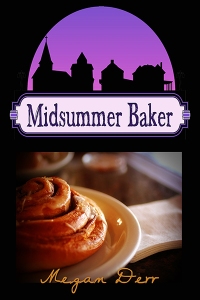 Marcell is Midsummer’s baker. While he works for his aunt in the family bakery, he’s the one with the magic baker’s touch.  A good and quiet lad, Marcel is hiding secrets  of the past and of the heart. Those of the past are known only to himself and two others reviled by the citizens of Midsummer.  Marcell’s life has not been without pain wether it was the loss of his parents or the bullying he encountered at school but the truth is about to come out and no one is prepared for the consequences.

The Withers Boys, Boyd and Tye Withers, are faerie half-brothers,  Their faerie mother died, leaving them when they were in their late teens but really she had abandoned them much earlier drowning herself in booze.  Known for their green thumbs and ability to always be in trouble, the Withers Boys have their own secrets to hide.

A stolen hideaway, a dark night, and  evil on the prowl.  What happens when all the hidden secrets are exposed?  Will Marcell find a happiness he never thought would be his?

Midsummer Baker is probably my third favorite of the Midsummer stories to date.  More a series of vinaigrettes than a cohesive tale, it still brings plenty of surprising layers and heart to this tale of love in the most unlikely of places. Each chapter represents a slice from Marcell’s life.  From these, we are able to build a picture of a sweet child who was the target not only of bullies at school, but someone worse.   Now grown, Marcell has harbored not only the secrets from his past but a hidden love that he feels will never be returned.  Marcell is such a sweet character it is easy to connect with him and his dreams.

The Withers Boys now have names.  Before Midsummer  Baker, they only appeared as references to mischief makers often in trouble with the law and various members of the community.  Now we get their painful back story, and they become not pests to be avoided but teenagers and young adults with a poignant sad story of their own.   Unexpectedly, there is a hidden connection to Marcell and the drama and romance takes off.  I wish we had more of Tye and Boyd.  They are great characters that deserve a  longer and deeper in scope story than this one.

There is publisher note included at the bottom that contains spoilers to the story.  It references the type and variety of love story found here.  I didn’t find it offensive but others might.  If anything other than a strict M/M squicks your bonnet, then you just might want to check out the note below.  Otherwise, I liked the story, love the series and want to see Megan Derr what happens next when Derr returns to Midsummer once more.

Kirby Hindon is Sheriff in MIdsummer, a magical, supernatural town.  On the easiest day, the job carries with it a almost constant list of surprises and supernatural  happenings that most Sheriffs never have to deal with.  But one of the toughest parts of his job is notifying the next of kin when someone is killed.  That’s the Kirby is facing now. Hobgoblin Kerry Greyling is dead and Kirby needs to contact his brother as next of kin.  The biggest surprise appears when Kerry’s brother, Merry, shows up to collect his belongings.

Merry is Kerry’s twin brother but they were alike only in appearance.  Where Kerry was dark, Merry is light as well as powerful.  In fact, Merry shimmers from head to toe.  He is a well respected and sought after clothing designer whose clothes are just as unique as Merry.  What happens when a lonely Sheriff  who also happens to be a witch meets up with an equally lonely hobgoblin?  Anything is possible in the town of Midsummer.

Midsummer Law picks up after the events of Midsummer Curse.  All the towns people are dealing with the aftermath of Ferdy the gremlin’s curse and the death of Kerry Greyling, Ferdy’s ex and all round rotter.  It’s been left to witch and town Sheriff Kirby Hindon to notify the closest kin of the deceased and depose of the body and personal belongings.  But what happens next is as unexpected to those involved as it is just what they need.

I love the town of Midsummer that Megan Derr has created.  A place where all the paranormal and supernatural belong, its both a haven and locus for events and relationships of all types.  We’ve had werewolves and kind of weres, weres and gremlins, vampires and vampire hunters and now a witch in search of love in the most unlikely of places.  Kirby Hindon has always existed on the secondary layer of the other stories as a character.  He arrives to haul off the culprit or at the ending of a nasty culmination of events.  Now he’s at the front of his own story and we get a better look at a lonely man with never enough time to practice his magic.

Merry Greyling, twin brother to the nasty Kerry Greyling, is a lovely delight of a character.  A sought after clothes designer, he wears what he makes, along with artfully applied makeup in unusual color combinations.  He’s powerful, quixotic, and lonely.  Hmmmm, where can a partner be found for him?  Derr brings these two together over the death of Merry’s brother and let the rest of the journey to love fall gently into place.

I say gently because there is no drama to be found here, that occurred in the previous story.  This is just two beings trying to work out a long distance relationship and it contain the commonplace errors and miscommunications  one would expect of such an attempt.  It gradually works itself out along the way as Derr starts to fold in the characters for the next short story in the series, Midsummer Baker.

This is a very quick read with none of the depth of the first  two stories.  There is no mystery involved, just two beings in search of love.  I did love the surprise that was Merry and wish we had much more of him and Kirby’s relationship.  We get a few answers to some left over questions but that’s it.  I missed the variety of characters and the layers to the plot that the other stories had, although the romance is a lovely one.   There were also one or two editing issues.  A moment where Kirby looks at Kirby (it should have been Kelly), easy enough to catch and fix but wasn’t.

Midsummer is a town guaranteed to pull you into its stories and relationships.  There is so much to discover here and so many more beings to meet.  I hope Megan Derr continues to develop stories in this series.  I can’t wait for more to come.

Cover art by Megan Derr.   She does a terrific job in branding the series and yet makes each design relevant to the story within. 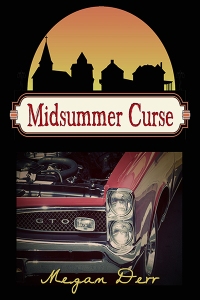 Ferdinand (Ferdy to friends), the town’s adorable gremlin, is miserable. His passion and nature is to fix and tinker  with all manner of things mechanical.  But someone or something has put a curse on him and now everything he touches falls to pieces…coffee pots, cars, clocks…everything.  His only hope lies in the gorgeous werewolf who has just arrived in town to fix his problem.  Ferdy has just broken up with his boyfriend and doesn’t want another.  So why can’t he get Brayton out of his head and heart?

Brayton’s stymied.  Everyone seems to love Ferdy and no one can figure out why he’s been cursed.  Something peculiar is going on and Brayton is determined to get to the meaning of it all.  But all he can think of is Ferdy, how the endearing pint sized gremlin smells and giggles.  What is happening to them both? Only time and a keen nose will sniff out the cause of their problems and much, much more.

Who knew gremlins could be so endearing?  Obviously Megan Derr, because with Ferdy she has created a pint-sized character full of vulnerability, sweetness, and a innate need to tinker with everything that has gears and mechanical moving parts.  With Ferdy and the reader its love at first sight.  For others it might take a sniff or  two before a powerful connection is made.  That’s where the other wonderful character of Brayton comes in.  Brayton is the odd were known as a lone wolf.  He wanders without a pack on business brought to him by word of mouth (or whatever parts necessary).  Brayton is snarky, self assured, and powerful in his own right.  Ferdy’s  total opposite or is he?  That’s one of the real delights of this story.

The chief plot of Midsummer Curse is a mystery.  Who and why cursed Ferdy so that everything mechanical he touches falls immediately to pieces?  As he is the town’s chief mechanic and handyman, this poses a huge problem for all.  That is hurts Ferdy horribly only gradually comes out as well. There are other small plot threads woven through this story that are equally enjoyable and twisty.  I love it when that happens.

Midsummer Curse may just be my favorite of the series.  A romantic duo of werewolf and gremlin?  Be still my heart and let my feet find a path to Midsummer’s Night and more stories to come. 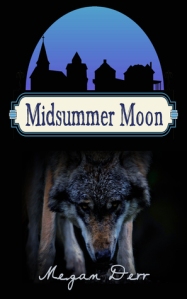 Homeless, lonely, and starving, werewolf Lowell has heard of a town and doctor that can cure his lycanthropy.  Lowell can remember little of his upbringing outside of foster homes and abandonment.  All he knows is that being a werewolf brings nothing but pain to himself and to others.  And he wants to be free of his curse.

Lowell is hitchhiking to the  small town of Midsummer’s Night where he thinks the doctor and cure might be residing.  But when a kindly stranger picks Lowell up in the middle of a storm, Lowell gets far more than just a ride to Midsummer’s Night, he finds a wild town made up of supernatural beings who enjoy who and what they are, beings who are ready to accept Lowell into their midst if only he can begin to accept himself and his past.

I love it when a short story feels so much bigger in scope than it is in length.  In Midsummer’s Moon Megan Derr invents a town full of wildly imaginative supernatural beings, each more over the top than the other.  From a doctor with secrets to a vampire with a love for baking cookies and colorful clothing, this is a town that the reader and Lowell need to get familiar with.

Ah, Lowell.  What a sad, little were he starts out being.  Bereft of past, he lacks even the basics to get by in the present, and he hopes to change his future in Midsummer’s Moon.  He does but not in the way he expects.  Derr gives us a character that experiences growth and maturity while outlining the basis for future  stories from this intriguing little town.

As always, Derr brings a few new twists and turns to familiar werewolf lore and introduces us to new supernatural beings and their society that are sure to pop up as the series continues.  Megan Derr is a must read for me and this new series is no exception.  It’s lively, twisty, and fun.  Pick it up and begin your introduction to Midsummer’s Moon, a town you will want to visit again and again.

Cover art: Unsure.  Dark  but works for the story.

Books in the Midsummer series will have audio books out shortly: